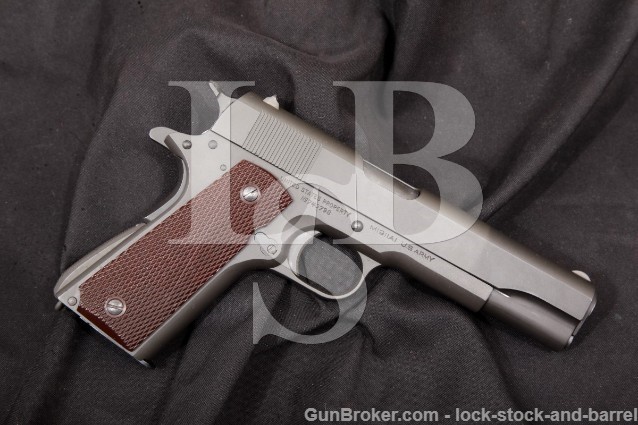 Sights / Optics: The front sight is a short rounded blade. The rear sight is a “U” notch dovetailed into the top of the slide.

Stock Configuration & Condition: The grips are checkered reddish brown plastic. The checkering is sharp and without mars. The grips rate in about Excellent overall condition.

Type of Finish: This pistol has a dark gray Parkerized finish. The slide has a two-tone finish, with the front two inches slightly darker than the rest – caused by heat treating of slides by Colt. The wide hammer spur, mainspring housing and the front face of the trigger are knurled.

Bore Condition: The bore is bright with sharp rifling. There is very light erosion scattered through the bore.

Overall Condition: This pistol retains about 97% of its metal finish. The hammer, grip safety, and trigger exhibit light operational wear. The barrel has light-moderate operational wear. The left side of the slide looks like it may have some very light, scattered pinprick erosion under the finish. Knurling on the hammer, mainspring housing and trigger are sharp. The grip screws are sharp and the markings are clear and crisp, except for the marking on the right of the trigger guard which fades toward the top and the “R.S.” in square on the left of the frame which fades to the top-left of the marking. Overall, this pistol rates in about Excellent condition as refinished/restored.

Mechanics: The trigger pull is crisp. The slide is tight on the frame. The installed magazine does not lock the slide when empty, but this appears to be due to the magazine, not the pistol (please see the next section). We have not fired this pistol. As with all used firearms, a thorough cleaning may be necessary to meet your maintenance standards.

Box, Paperwork & Accessories: This pistol comes with one unmarked 7-round blud magazine. The body shows light operational wear, the feed lips are intact and the spring is strong. The slide-stop tab is slightly disfigured and tends to slip over the slide stop protrusion rather than engaging it. Overall, the magazine is in about Fair-Good condition, but looks Fine-plus.

Our Assessment: The 1911 and 1911-A1 pistols served the military of the United States from 1911 to 1985, through two World Wars and the Korean and Vietnam wars. They gained a reputation as a reliable handgun with plenty of stopping power, and are held in high regard by those who have used them. This is Colt Model 1911-A1 pistol was made in October of 1941 as wartime production was ramping up. In that year, their production of M1911A1s increased from 1,500 per month in January to more than 5,000 per month in December. The pistol is correctly marked, including serial matching between the slide and frame. The pistol is in about Excellent condition with about 97% of its parkerized finish remaining and grips in Excellent condition as well. The bore is bright with sharp rifling and some light erosion scattered through the bore. This pistol looks like it just came off the assembly-line yesterday and the refinish/restoration was clearly professionally done to leave the markings in such fantastic condition, not to mention the sharpness of the knurling and slide serrations. If it didn’t look so perfect, it would likely pass as original finish! This pistol would make an excellent addition to a Colt, WWII, or military pistol collection as well as being a great addition to any American collection in general. Please see our photos and good luck!