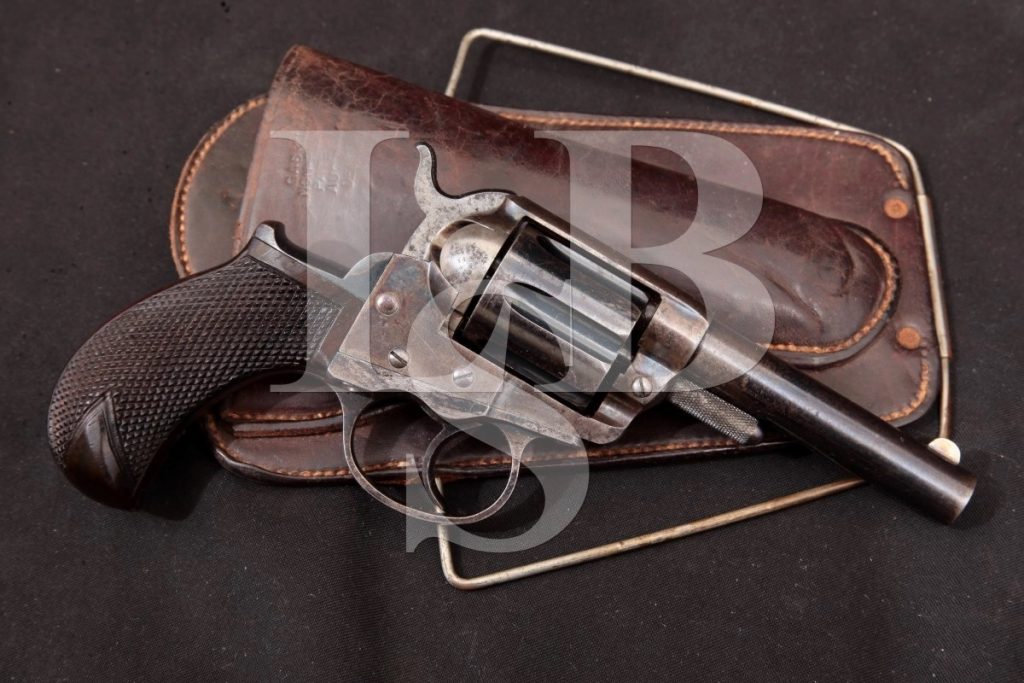 Caliber: .38 Long Colt (While .38 Special cartridge may chamber in this revolver, they should not be used because of the higher pressures created.)

Sights / Optics: The front sight is tall thin half-round blade fixed to the barrel. The rear sight is a “V” groove in the top strap.

Type of Finish: The barrel, cylinder and grip frame are blued. The top and rear surfaces of the hammer and the entire trigger have a fire blue finish. The frame is case colored.

Bore Condition: The bore is bright, with sharp rifling. There is light erosion in the bore from the muzzle back about an inch.

Overall Condition: This revolver retains about 55% of its metal finish. There are spots of pinprick surface erosion in the cylinder, with a few spots of moderate erosion in the cylinder, loading gate, and the right side of the frame and trigger guard, a few spots of pinprick surface erosion in the right side of the barrel, and small spots of surface frosting on the hammer and backstrap. There is finish loss at the muzzle, in the rear half of the barrel, in the trigger guard and front strap, and on the edges of the cylinder, with thinning in the remainder of the blued areas. The case coloring is still visible on the sides of the frame. There are abrasions, scratches from aggressive polishing and several dings in the underside of the barrel. There are a few light handling marks in the surfaces, with small scratches in the top of the backstrap near the frame screws. The cylinder pin knurling shows light wear and several disfiguring marks. The hammer knurling is sharp to the touch. The screw heads are disfigured. The markings on the frame are crisp, but those on the left side of the barrel are shallow from polishing and wear. Overall, this revolver rates in about Fair condition.

Box, Paperwork & Accessories: This revolver comes with a brown leather holster by Charles E. Gaskill of El Paso. The outside surface of the holster is marked “GASKILL / NON PULL OUT / PATENTED / AUG ??? / DEC ???” (The original patent date for this holster was Aug. 11, 1908, with the second following Dec. 8, 1914). We think this holster was designed for the Colt M1903 and M1908 pocket pistols, but it fits this revolver like a glove. The holster has spring loaded metal rods that are compressed, and then the holster slid into a coat pocket, where the rods then expand out and hold the holster in the pocket. There is a leather pull at the top rear of the holster for compressing the rods while in the holster so that it can be removed. The leather is supple and the stitching is all intact. There is some finish loss along the top edge of the holster and a few light handling marks in the leather. The holster is in about Fine condition.

Our Assessment: From Wikipedia: “The Colt M1877 was a double action revolver manufactured by Colt’s Patent Fire Arms from January 1877 to 1909 for a total of 166,849 revolvers. The Model 1877 was offered in three calibers, which lent them three unofficial names: the “Lightning”, the “Thunderer”, and the “Rainmaker”. The principal difference between the models was the cartridge in which they were chambered: the “Lightning” being chambered in .38 Long Colt; the “Thunderer” in 41 Colt. An earlier model in .32 Colt known as the “Rainmaker” was offered in 1877. The M1877 was designed by one of the inventors of the M1873 Colt Single Action Army, William Mason, as Colt’s first attempt at manufacturing a double-action revolver and was also the first successful US-made double-action cartridge revolver. Neither “Lightning” nor “Thunderer” were Colt designations, nor used by the factory in any reference materials. Both terms were coined by Benjamin Kittredge, one of Colt’s major distributors, who was also responsible for the term “Peacemaker” for the Single Action Army. Old West Outlaw John Wesley Hardin frequently used both “Lightning” and “Thunderer” versions of the Colt 1877 revolver.”. The M1877 revolvers were made with and without ejector rods, and the short-barreled versions, such as this one, were marketed as “Shopkeeper’s Specials”. This revolver was made in 1877, the first year of production, and has all matching serial numbers. It comes with a vintage inside the pocket holster by Charles Gaskill of El Paso. This revolver is in Fair condition with about 55% of its original finish remaining. The bore is bright with sharp rifling, but the cylinder timing is off and the half-cock and full-notch hammer notches have been removed. It shouldn’t be too hard to take this apart and figure out what is wrong. At worst, one probably has to weld-up the hammer a little and re-grind the notches to restore single action functionality, but fixing the timing may be more complicated. If its mechanical problems can be fixed, this will make a great addition to ANY Colt collection. We see these come through our shop fairly often, but we have never seen one made in 1877, and very few have had an original finish as nice as the one on this revolver. Please see our pictures and good luck in your bidding.

CA Legal or CA Private Party Transferable: This Antique revolver CAN be transferred/sold in California. All cartridge firing handguns (even C&R’s and antiques) sold to a California resident must be DROS’d. This does not apply to out of state residents.