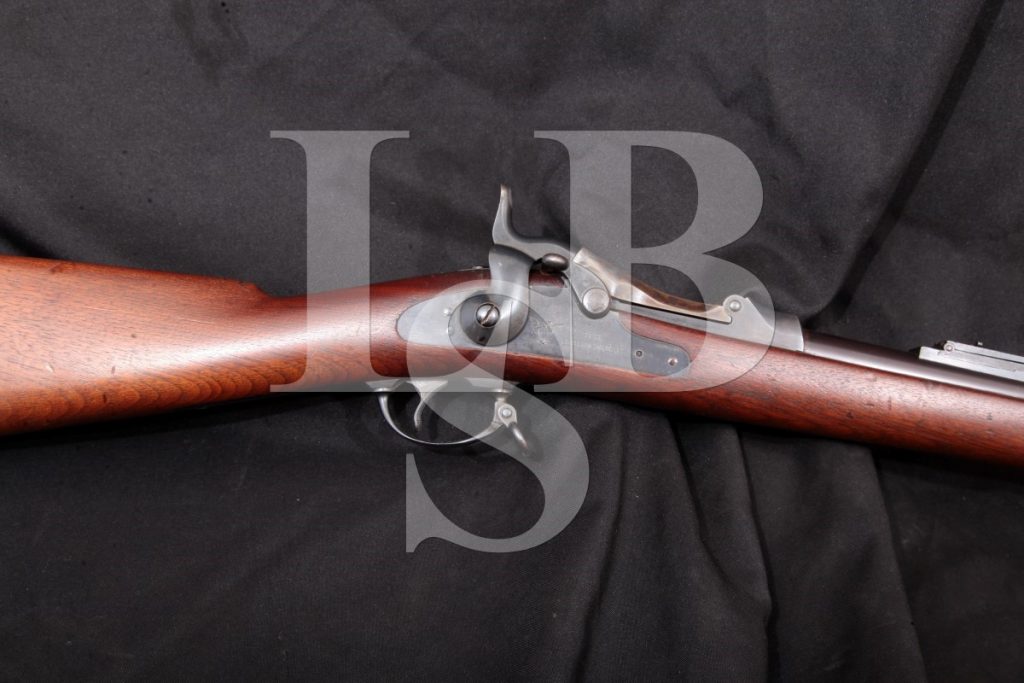 Year of Manufacture: 1888 (From Cartouche)

Stock Configuration & Condition: The stock is a one-piece walnut with a smooth straight grip. The buttstock has a blue steel carbine style buttplate. The forend is nearly as long as the barrel, with a blued steel nosecap. The forend is held with two blue steel barrel bands. The underside of the nosecap and the front part of the forend are grooved for a cleaning rod. There is a sling swivel at the front of the two-piece trigger guard and a sling swivel and stacking swivel on the bottom of the front barrel band. There are several dings, bruises, and drag lines scattered over the surfaces, with a gouge in the left side of the buttstock near the belly. There are no cracks or chips noted and the wood to metal fit is excellent. The comb is 10 ½” in length and the LOP measures 13 ¼” from the front of the trigger to the back of the buttplate. The buttplate shows heavy erosion at the heel with finish loss and light wear at the toe. The buttplate is in about Good condition. The stock rates in about Fine Plus condition.

Type of Finish: The rifle is blued with a case colored breechblock and upper tang. The receiver has a dark oil quenched finish.

Overall Condition: This rifle retains about 92% of its metal finish. The front section of the barrel shows thinning and several small scratches. The center section of the barrel shows a spot of thinning behind the front barrel band, a drag line, four tiny spots of solid erosion and a few tiny sharp dings. There are a few tiny spots of surface frosting in the lockplate and a drag line and a few light handling marks in the trigger guard and thinning and a light sprinkling of pinprick surface erosion in the lower tang. The case coloring in the breechblock and upper tang is vivid. There is a small mark on the top of the breechblock from the extractor and a spot of finish loss on the left edge of the breechblock latch.  The hammer knurling shows light wear and is still sharp to the touch. The upper tang screw and the hammer screw are disfigured. The markings are crisp. Overall, this rifle rates in about Excellent condition.

Mechanics: The action functions correctly. The hammer has quarter and half cock safety positions. The trigger guard is two pieces and the trigger has a serrated front face with knurling at the bottom. We have not fired this rifle. As with all used firearms, a thorough cleaning may be necessary to meet your maintenance standards.

Box, Paperwork & Accessories: A cleaning rod comes with the rifle and is stored under the forend. The rod is blued, with a button tip and a slot for a patch just behind the tip. The rod is in about Excellent condition.

Our Assessment: The Model 1873 “Trapdoor” Springfield was the first standard-issue breech-loading rifle adopted by the United States Army and it and the Model 1884 and 1888 Trapdoors were the main service rifles of the U.S. Military until they were gradually replaced by the Springfield Model 1892 bolt-action rifle. George Custer’s troops were armed with them at the Battle of the Little Bighorn, and they were still used by secondary units during the Spanish-American war in 1898. This Model 1884 Trapdoor rifle is immaculate, with the most vivid case coloring on the breechblock and the crispest barrel markings we have ever seen on a trapdoor. Even the stock cartouche and the script “P” in the belly are crisp. The rifle has the correct Buffington rear sight and “SWP” cartouche dated 1888, which is correct for the serial number on the gun. The rifle comes with the correct cleaning rod stored under the barrel. The rifle is in about Excellent condition with about 92% of its original finish remaining. The bore bright with sharp rifling and no erosion. This is an extremely nice-looking rifle about the best trapdoor we have ever seen. It should garner a lot of attention from the collectors. According to Flayderman’s, there were about 200,000 of the 1884 Trapdoors made in rifle configuration, but there are a lot less remaining to this day, and very few in this nice of a condition.

CA Legal or CA Private Party Transferable: This antique rifle can be transferred/sold in California.