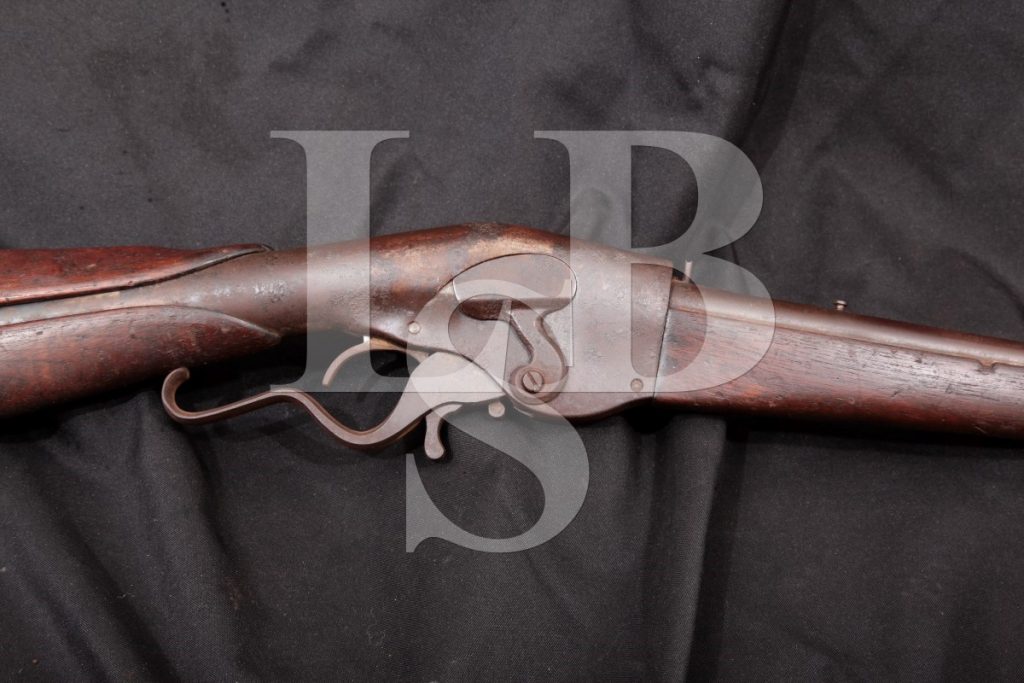 Barrel Length: The round barrel is 22” in length.

Sights / Optics: The front sight is a tall blade dovetailed into the barrel. The rear sight is missing, but its mounting screws were retained.

Stock Configuration & Condition: The stocks are three pieces consisting of a forend and a two-piece buttstock. The buttstocks are screwed to the tubular frame that houses the receiver and magazine. There is a steel carbine style buttplate mounted on the butt with a trapdoor covering a hole for loading cartridges into the magazine. The forend is held with a single barrel band. There is a sling swivel attached to the underside of the bottom buttstock piece and hole in the bottom of the forend barrel band for mounting a 2nd swivel. The wood is dark with oil staining, and very dark around the metal surfaces. In general, the wood to metal fit is excellent, and there are no cracks noted. There is a small divot in both the left and right top edges of the forend. There are multiple dings and bruises scattered over the stocks, with abrasions at the toe and a bruise with finish loss in the underside of the buttstock where it has been hit by the rear edge of the lever. The LOP measures 13” from the front of the trigger to the back of the buttplate. The buttplate shows a thick plum colored patina with light erosion and a few tiny dings. The buttplate is in Good condition. The stocks rate in about Very Good overall condition.

Type of Finish: There is no finish remaining. We think the original finish was blued with a case colored lever.

Finish Originality: There is no indication that the rifle was ever refinished.

Bore Condition: The bore is dark with moderate wear in the rifling. There is light erosion throughout the bore with moderate to heavy erosion from the muzzle back a few inches.

Overall Condition: This rifle retains about 0% of its original metal finish. The barrel and receiver show a thick, dark, plum colored patina. There are spots of light erosion in the barrel with thick scabs of erosion on the receiver. The screw heads are mostly sharp, with light marks from a screwdriver, except for the trigger screw, which is badly disfigured and may be unserviceable. The barrel markings are clear, but these carbines were supposedly serialized, and there are no numbers visible on the receiver. Overall, this rifle rates in about Good overall condition with the exception of the missing rear sight and light mainspring.

Mechanics: The magazine revolves and the cover over the loading port opens and closes when the lever is opened and closed. This rifle has a hammer that resides underneath the front of the lever, and is cocked when the lever is operated. The action functions correctly, except that the mainspring is weak, resulting in the hammer falling slowly when the trigger is pulled. We have not fired this rifle. As with all used firearms, a thorough cleaning may be necessary to meet your maintenance standards.

Our Assessment: The Evans lever action rifles were unique in several ways. In addition to its tubular framed receiver/magazine and its under-the-lever hammer, it was the only mass produced rifle ever attempted in the state of Maine and also holds the record for the greatest capacity of any repeating rifle with an internal magazine. The rotary magazine fed through the trapdoor in the buttplate held 34 of the Short rounds used with the Old and Transitional Models and 28 of the Long rounds used with the New Models. Flayderman’s Guide indicates about 4000 plus New Model Carbines were made between 1877 and 1879, with about 7000 more evenly split between Sporting Rifle and Musket models. This is a New Model Carbine with a 22” barrel in about Good condition with the exception of its missing rear sight and light mainspring. The action functions properly, including the rotating magazine and rotating dust cover. This is a nice example of one of the most unique American made rifles of the late 19th Century, and deserves a spot in any collection of early American firearms.

CA Legal or CA Private Party Transferable: This Antique rifle can be transferred in California.