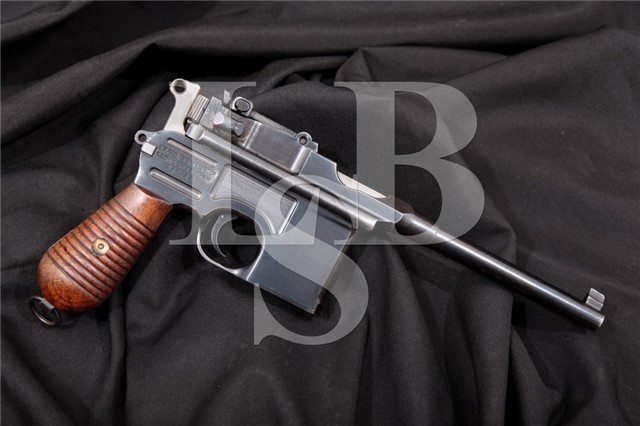 Sights / Optics: The pistol is mounted with a “V” notched rear sliding elevator sight with markings from “50-1000” that is pinned to the barrel extension. The front sight is an inverted “V” notch fixed to a rectangular base on the barrel.

Stock Configuration & Condition: The stocks are grooved walnut with a satin finish on a grip frame slotted for a wooden stock. There are 12 grooves in each grip, which is the correct number for this model pistol. There is a brass escutcheon around the grip screw in the left grip. There is light oil staining towards the bottoms of the grips. The bottoms of the grips show a few dings from impact with the lanyard ring and there is also a sharp ding and a drag line in the lower section of the right grip. There is a bruise in the top edge of the right grip and a few light marks in the top section of the left grip. The edges of the grooves show moderate wear with a few small dings in the flats between the grooves. The grips are in about Fine overall condition.

Type of Finish: The pistol is blued. The bolt and hammer are “in The White”, and the rear sight slider and extractor have a polished blue finish which may have been fire blue at one time.

Finish Originality: The finishes are original except for the bolt stop, which has been refinished. There are a few deep spots of erosion under the finish in the bolt stop.

Bore Condition: The bore is mostly bright with sharp rifling and no erosion. There is, however, a narrow ring about ½” behind the muzzle that is fairly deep and we can barely see a slight bulge on the outside of the barrel at the back edge of the front sight.

Mechanics: The rear of the frame is slotted for a shoulder stock. The barrel extension is tight to the frame. This pistol has a universal safety, which can be applied with one hand when the hammer is cocked. The action functions correctly. We did not fire this pistol. As with all used firearms, a thorough cleaning may be necessary to meet your maintenance standards

Box, Paperwork & Accessories: A lanyard ring is attached to the bottom of the grip frame.

Our Assessment:The Broomhandle Model 1896 Mauser is certainly an interesting looking firearm. Its features are the most distinctive of any other pistol. In addition to being popularized in Soviet films as the iconic weapon of the Russian revolution and civil war, it was even used as a basis for futuristic weapons like the blaster used by Han Solo in Star Wars. This pistol is a Late 1930 Commercial model, the last model of this pistol made. The pistol still has its original finish except for the bolt stop, which has been refinished, and the grips are the correct 12 groove grips used on this model. The pistol is in about Very Good condition with about 75% of its finish remaining. The bore is bright with sharp rifling, but there is a narrow bulge near the muzzle: the bulge requires a magnifying glass to be seen on the outside of the barrel, and should not affect the collectable value of the gun. This is a very nice-looking pistol which some of the sharpest markings we have seen. The “PM” mark on the front face of the hammer and the “S” and “F” marks on the safety lead us to believe this may have been owned by the Brazilians as these same marks appear on some of the Schnellfeuer Machine Pistols they purchased (PASAM Machine Pistol).  The Broomhandle Mausers are very collectable, and there is no doubt the collectors will be interested in this one as well.