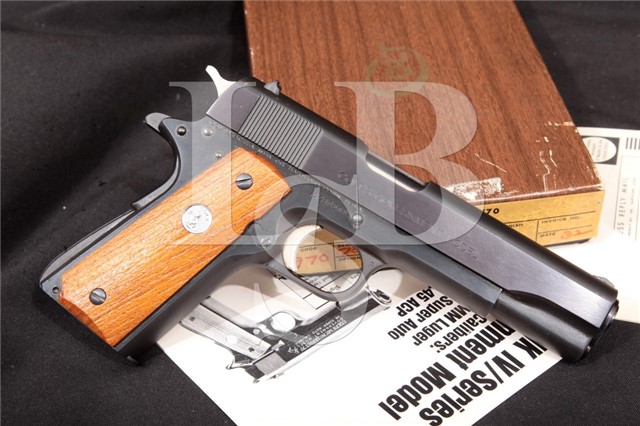 Sights / Optics: The front sight is a serrated ramp blade, fixed to the slide. The rear sight is a flat top-square notched base that is dovetailed onto the slide.

Stock Configuration & Condition: The grips are smooth walnut with silver-colored Colt logo medallions. There is no notable wear or damage to the grips. The grips are in Excellent overall condition.

Overall Condition: This pistol retains about 97% of its metal finish. The slide has thinning on the top-right edge and a small, light mark on the top over the slide serrations on the left side. The frame has a light mark under the slide stop which continues onto the trigger. The barrel and hammer have light operational wear. The screw heads are sharp. The markings are clear. Overall, this gun rates in about Excellent condition.

Mechanics: The action functions correctly. The mechanics are crisp and the pistol shows little evidence of having been used. We have not fired this handgun.

Box, Paperwork & Accessories: Included is one blue factory 7-round magazine, showing a few minor marks and operational rubbing from normal use, in Excellent condition. The spring is strong with un-marred feed lips. A factory two-piece faux-wood cardboard box with serial-matching end lable and owner’s manual is also included. The box has very light wear, mostly at edges and corners in about Fine-plus condition.

Our Assessment: Colt’s Patent Firearms Mfg. Co. is well known as the original and most recognized maker of 1911-type pistols. Ever since the design’s military acceptance in March of 1911, and the beginning of production in January of 1912 Colt has never ceased manufacturing pistols based off the original 1911 design, known in commercial trim as simply the Government Model. However, in its 100-plus years of production the design has seen many slight evolutionary changes in the name of improved (or cheaper) manufacture, product safety, and market trends. From 1911 until 1970 there were virtually no significant changes to the basic design, but the year 1971 saw the first mechanical “improvement” to the 1911-type pistol. Colt redesigned the barrel bushing from a solid cylindrical type to a spring-steel, “finger collet” bushing that gripped the end of the barrel, which had also been slightly redesigned with a slight belled end to accommodate the collet bushing. The new “Accurizor” barrel and bushing was intended to improve the intrinsic accuracy of the new Colt Government Model pistols, which were then designated the MK IV/Series 70 to differentiate them from all prior variations of the Government Model. While not as capable of superb accuracy as a true hand-fit barrel and match bushing, the new setup nonetheless allowed the typical mass-produced Colt shoot better than the older military-spec pistols with their loosely fit solid bushings and straight barrels. The new setup was successful enough that the full-sized Gold Cup National Match pistols also incorporated the finger collet bushings, although the shorter Commander models retained the use of their shorter solid bushings.

This is a beautiful Series 70 with about 97% of its blue finish remaining. Sporting a strong bore and crisp mechanics. Included is a factory magazine, box and owner’s manual. If you are a Colt collector, chances are you have a Series 70 in the safe already, but in this condition, one would be more than happy to add this one and maybe take the other one out shooting! Please see our pictures and good luck.

CA Legal or CA Private Party Transferable: This handgun CANNOT be transferred as a dealer sale in CA but can be sold as a PPT at our shop in Simi Valley. This does not apply to out of state residents.