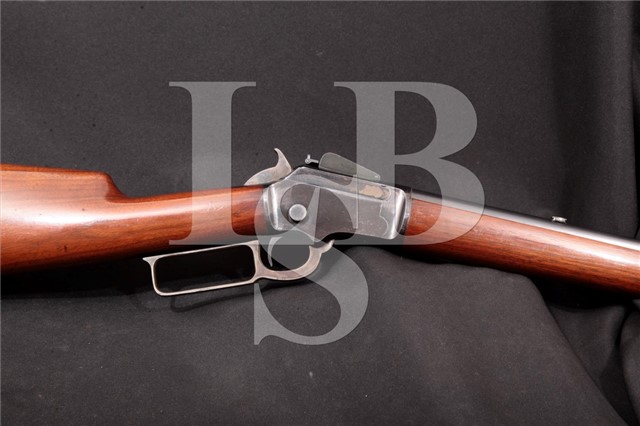 Barrel Length: The round barrel is 24” in length and the magazine tube is full length.

Sights / Optics: The front sight is a Lyman No. 5 Combination “Beech” sight that is dovetailed into the barrel. It has a folding globe, and when the globe is folded up, a pin and ball are presented, and then folded down, an ivory post is presented. The rear sight dovetail is filled with a blank. There is a L. L. Hepburn peep sight mounted to the top of the receiver. The elevator’s height is adjusted by lifting or lowering the elevator while pushing the rear of the elevator forwards, and then releasing the back of the elevator so that its tab on the left side engages one of the tiny notches on the left side of the sight’s base. The rear sight does not have a windage adjustment.

Stock Configuration & Condition: The stocks are walnut with a lacquered finish that show oil staining around the receiver. The buttstock has a straight grip and an “S” shaped carbine style steel buttplate. The forend is smooth with a blued steel nosecap. There are spots of finish loss on the left side of the buttstock where the finish was scraped off, scratches at the heel and right side of the buttstock, and fine crazing on the right side of the buttstock. There is a long sharp ding in the bottom surface of the forend. There are light handling marks and tiny dings scattered over the stocks. There are no cracks or chips noted and the wood to metal fit is excellent. The LOP measures 13 1/8” from the front of the trigger to the back of the buttplate. The buttplate shows thinning, light handling marks and tiny spots of surface frosting. The buttplate rates in about Fine condition. The stocks rate in about Fine overall condition.

Type of Finish: The rifle is blued, with a case colored lever and hammer.

Bore Condition: The bore is mostly bright with very light wear in the rifling. There is no erosion in the bore.

Overall Condition: This rifle retains about 75% of its metal finish. There are a few spots of pitting in the top of the barrel and a scrape mark through the finish on the right side between the muzzle and the forend. There is light erosion scattered over the receiver with finish loss on the upper tang and a spot of finish loss on the breechblock.There is extremely light thinning in the barrel and magazine tube, with several light handling marks scattered over the surfaces. The magazine tube knurling shows very light wear and the hammer knurling shows moderate to heavy wear at the rear. The sideplate thumb screw serrations are sharp. The case coloring on the lever is slightly subdued. The screw heads are sharp and the markings are clear. Overall, this rifle rates in about Very Good to Fine condition.

Mechanics: The action functions correctly. The right side plate is held with a thumb screw which makes taking apart the action for cleaning easy to do. The hammer has a half-cock safety. We have not fired this rifle. As with all used firearms, a thorough cleaning may be necessary to meet your maintenance standards.

Our Assessment: This is Marlin Model 1892 takedown lever action rifle chambered in .32 Short or Long Rimfire, and was designed so that it could shoot .32 Colt centerfire cartridges by simply replacing the firing pin. This model was the follow-on to the Model 1891, which had a side loading gate similar to that used on Winchesters. It proved difficult to load the tiny cartridges through the loading gate, so in 1892 the rifle was re-designed to provide a magazine tube that could be easily loaded by just pulling the cover forward. The Model 1892 was redesigned in 1897 to add a takedown feature, with the .22 caliber version becoming the Model 1897 and modified yet again in 1921 to make the bolt stronger (Model 39). The rifle was so popular over the years that variants of the Model 39 (e.g. 39A) are still being made today. The rifle requires no tools to take it apart – simply turn a thumb screw on the right side of the receiver and the side plate comes off, exposing the entire action. This rifle is in about Very Good to Fine condition, and the bore is bright with very light wear in the rifling and no erosion. It has a Lyman No. 5 combination front sight (Beech style globe with ball and pin and an ivory post) and a L. L. Hepburn peep sight mounted on the top of the receiver. We would expect serious collector interest in this rifle based on the amount of original finish still remaining, and the vintage sights will be like icing on the cake. The .32 caliber rifles aren’t as highly sought after as the .22s, but a nice rifle is still a nice rifle.