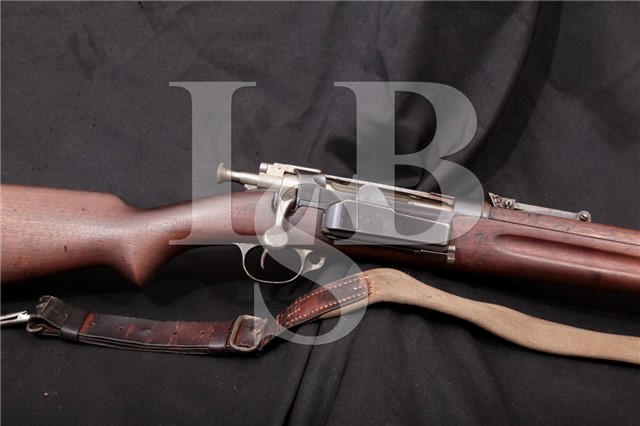 Sights / Optics: The front sight is an inverted “V” bladed post atop a small base. The rear sight is a “U” notched sliding escalator assembly. It is marked from “1 – 21” in increments of 2 and “2200” at the top. The rear sight blade is notched on the bottom as well. The rear sight is equipped to flip completely over onto a waiting stud to serve as a short range battle sight.

Stock Configuration & Condition: The hardwood stock has a pistol grip, cut out for the bolt handle, scallop for the safety, finger grooves, nosecap with a hole for the included cleaning rod, 2 sling loops, 2 barrel bands (large & small) and a metal buttplate. The buttplate, nosecap and barrel band each show scrapes & discoloration from oxidation. The buttplate also shows some surface erosion. The wood shows various scrapes and scratches. These marks have been oiled over. The LOP measures 13 ½ inches from the front of the trigger to the back of the buttplate. The stock rates in about Very Good Plus to Fine condition.

Bore Condition: The bore is dark. The rifling is deep; less pronounced at the muzzle. There is erosion present in the bore.

Overall Condition: This rifle retains about 90% of its metal finish. The receiver & magazine have been treated with cold blue. Oxidation & light surface erosion show through the cold blue finish. The bottom metal shows surface erosion, thinning & discoloration. The metal also shows discoloration & thinning as well as various scrapes & small scratches. The screw heads show use. The markings are deep. Overall, this rifle rates in about Very Good Plus condition.

Box, Paperwork & Accessories: The rifle comes with a Norwegian carry sling made of leather & canvas. It shows discoloration, light cracking & some surface loss on the leather. There is a tear on the leather at the buckle. The sling will have to be repaired to mount it on the rifle. It is in about Poor condition due to the tear.

Here is some Norwegian Krag information from Wikipedia: “The M1912 Carbine, M1912/16 Carbine, M1912/18 Carbine (“short rifle”), was made after it became clear that the long barreled M1894 left something to be desired. The M1912 was adopted after experiments with shorter, thicker barrels and different projectiles. It differed from the earlier models by being stocked all the way to the muzzle; the bracket for the bayonet was moved from the barrel to under the stock. The M1912 carbine also featured an improved (strengthened) action which differed from the M/94 action on several points. It was soon clear that the nose band was too weak, which led to the /16 and /18 modifications of the basic design. A total of 30,118 were produced in the military serial number range between 1913 and 1926.”