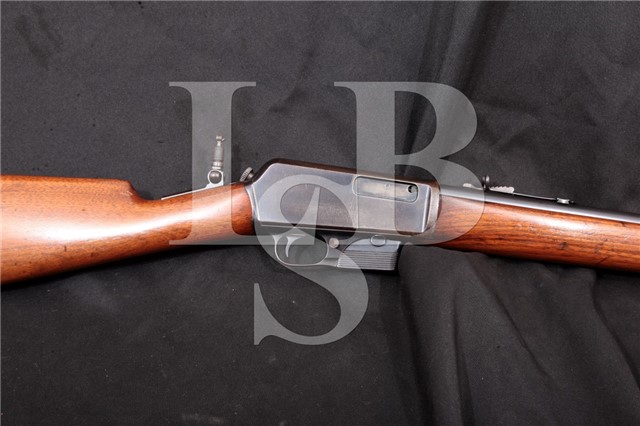 Sights / Optics: The front sight is a brass blade dovetailed into the top of the barrel. The rear sight is a “U” notched semi-buckhorn elevator sight dovetailed into the barrel. There is a Lyman No. 1 Combination Tang Sight, Second Variation, mounted on the upper tang. The sight folds, and locks into position with a detent. The sight has a tiny aperture for target shooting that can be folded down, revealing a large aperture that can be used for close or moving targets.

Stock Configuration & Condition: The stocks are two-piece walnut with a lacquered finish. The buttstock has a straight grip and a black hard rubber checkered buttplate marked with the “Winchester Repeating Arms” logo. The forend has a blued steel nosecap, with the operating rod protruding through the front face of the nosecap. The forend show oil staining around the receiver. There are two tiny dings in the front of the comb, two scrape marks through the finish in the front right side of the comb and two wide drag lines and two small dings in the left side of the buttstock. There are several small dings and drag lines in the forend, and a few light handling marks scattered over the forend and the buttstock. The wood to metal fit is excellent. The LOP measures 13 13/16” from the front of the trigger to the back of the buttplate, which shows light wear at the heel and toe and light wear in the checkering. The buttplate is in about Fine condition. The stocks rate in about Fine overall condition.

Bore Condition: The bore is bright with light wear in the rifling. There is no erosion in the bore.

Overall Condition: This rifle retains about 80% of its metal finish. There are several small spots of solid erosion scattered over the barrel and the nosecap with a few spots of very light erosion on the top of the receiver and light surface frosting on the trigger guard. There is thinning at the front edge of the barrel, and on the nosecap and receiver. There are light handling marks scattered over the surfaces, with a small sharp ding at the right rear of the rear sight, and light scratches on the sides of the receiver. The serrations on the operating rod are sharp but there are tool marks visible in the serrations of the takedown screw. The screw heads are sharp and the markings are clear. Overall, this rifle rates in about Fine condition.

Mechanics: The action functions correctly. There is a cross bolt safety at the front of the trigger guard. We have not fired this rifle. As with all used firearms, a thorough cleaning may be necessary to meet your maintenance standards.

Box, Paperwork & Accessories: This rifle comes with one five round blued magazine. The magazine shows thinning on its edges and light wear. It is in about Fine condition.

Our Assessment: From Wikipedia: “The Winchester Model 1905 is a blowback-operated, semi-automatic rifle produced by the Winchester Repeating Arms Company beginning in 1905, with production ending in 1920 after a little over 29,000 had been built.  It was fed from a 5 or 10-round capacity, detachable box magazine located immediately forward of the trigger guard. Two factory chamberings were offered: .32 SL and .35 WSL. In 1906, Winchester released a modified design with a slightly larger action, the Model 1907, which remained in production until 1958. It was chambered in .351 SL, a much hotter round than the .35 WSL, and was immensely popular with police departments and even saw use during WWI by the French.”. The .35 WSL cartridge used in the M1905 was intended as a short-range cartridge for deer and black bear, but was superseded by the .351 SL and is now obsolete. This rifle is a M1905 chambered in .35 WSL. The rifle is in about Fine condition with about 80% of its original finish remaining. The bore is bright with light wear in the rifling and no erosion. This rifle was made in 1905, the first year of production, and is in remarkable condition for being 113 years old. In this condition, it is sure to find a home in a high-end Winchester collection.