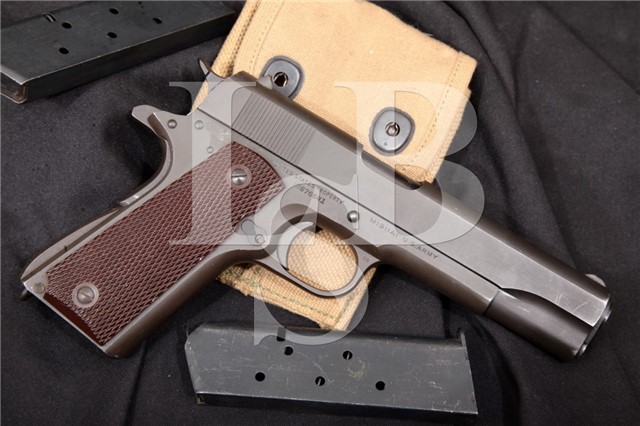 Sights / Optics: The front sight is a short blade with a serrated and slightly ramped rear face. The rear sight is a “U” notch dovetailed into the top of the slide.

Stock Configuration & Condition: The grips are checkered reddish brown plastic. The checkering is sharp and without mars. The grips rate in about Excellent overall condition.

Type of Finish: This pistol has a dark gray Parkerized finish. The slide has a two-tone finish, with the front two inches slightly darker than the rest – caused by heat treating of slides by Colt. The mainspring housing and the front face of the trigger are knurled.

Bore Condition: The bore is mostly bright with sharp rifling. There is no erosion in the bore, but there are a few light tool marks in the lands.

Overall Condition: This pistol retains about 93% of its metal finish. There is finish loss on the front edges of the slide and frame, with strips of finish loss on the sides of the slide at the front from rubbing on the frame. There is thinning on the side release, safety and the rear edges of the slide, with a scratch below the slide release on the left side of the frame, and small marks through the finish on the sides of the grip safety. There are few light handling marks scattered over the surfaces. The tips of the serrations on the right side of the slide have been ground flat. The hammer and recoil spring plug knurling show light wear, the mainspring housing knurling shows moderate wear and the knurling on the rest of the small parts is sharp. The grip screws are sharp and the markings are clear and crisp, except for the ordnance mark, which is thin. Overall, this pistol rates in about Fine condition.

Mechanics: The trigger pull is crisp. The slide is tight on the frame. The action functions correctly. We have not fired this pistol. As with all used firearms, a thorough cleaning may be necessary to meet your maintenance standards.

Box, Paperwork & Accessories: This pistol comes with 2 black parkerized 7 round magazines and a US M1910 double magazine pouch. The magazines show light handling marks and are in Fine overall condition. The pouch is khaki drab in color, holds two magazines and is design to slip over the end of a web belt. The flap is secured with two bronze snaps. The inside of the flap is marked “F.S.F. / 519 / 7  1918” indicating it was made by the FSF company in July 1918. The pouch shows minimal wear and is in Excellent condition.

Our Assessment: The 1911 and 1911-A1 pistols served the military of the United States from 1911 to 1985, through two World Wars and the Korean and Vietnam wars. They gained a reputation as a reliable handgun with plenty of stopping power, and are held in high regard by those who have used them. This is Colt Model 1911-A1 pistol was made in February of 1943. The pistol is correctly marked, but although the barrel is from WWII, it was manufactured by the Flannery Bolt Company, who did not furnish barrels to Colt, and didn’t begin making barrels until late 1943. The pistol is in about Fine condition with 93% of its original parkerized finish remaining. We are a little bothered by the right side slide serrations and the wear in the mainspring housing knurling, but the markings are all clear and mostly crisp, so we think the finish is original. The bore is mostly bright with sharp rifling and no erosion. With its original finish, and with its two magazines and WWI era magazine pouch, the Colt collectors and collectors of WWII weapons should be interested in this pistol. The barrel isn’t correct, but Colt barrels from WWII aren’t hard to come by on the various auction sites.