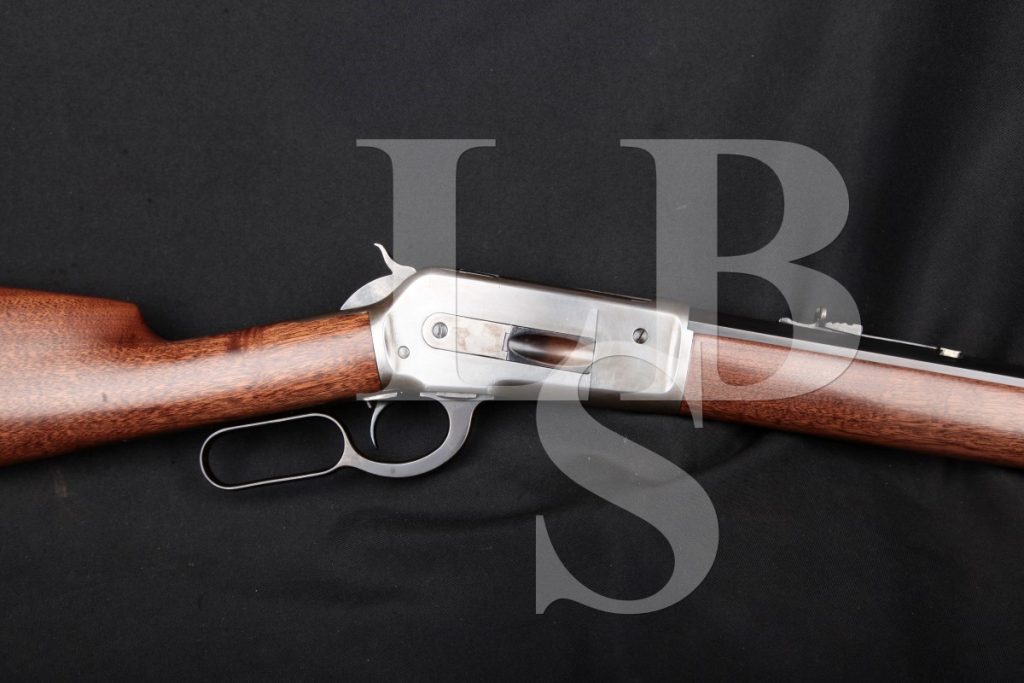 Year of Manufacture: 1894 (Made several years before Winchester changed to a blued receiver in 1902.)

Sights / Optics: The front sight is a similar to the old Beech combination sight (Later Lyman No. 5). When the globe is folded down, a brass post is presented and then folded up, a pin and ball globe is presented. There is a “U” notched semi-buckhorn elevator sight dovetailed into the top of the barrel at the rear. The upper tang is drilled and tapped for a tang sight.

Stock Configuration & Condition: The stocks are two-piece walnut with a satin finish. The buttstock has a straight grip with a checkered black hard rubber buttplate marked with a circular Winchester Repeating Arms logo. The forend has a case colored steel nosecap. There are only a few light handling marks in the stocks. The wood to metal fit around the receiver is excellent, but the top edge of the forend doesn’t quite line-up with the top edge of the nosecap, especially on the left side. Our guess is that the stocks and the buttplate have been replaced. The shotgun style buttstock available on special order up to about SN 145,000 had a small cut-out for a spur or tang at the top front of the buttplate. The LOP measures 13 5/16” from the front of the trigger to the back of the buttplate. The buttplate shows a light mark at the toe, and its checkering is sharp. The buttplate is in about Excellent condition and the stocks are in about Excellent condition.

Type of Finish: The rifle is blued with a case colored nosecap and receiver.

Finish Originality: We think the finish on the barrel, magazine tube and lever has been professionally restored, and the receiver lightly polished. If the receiver was originally case colored, the lever should have been as well.

Bore Condition: The bore is bright, tending to gray at the muzzle. The rifling is sharp. There are a very few tiny spots of light erosion in the grooves near the muzzle.

Overall Condition: This rifle retains about 72% of its current metal finish. There are a few scattered spots of pinprick surface erosion in the barrel. There are spots of thinning in the barrel and lever, with very light thinning on their edges, and thinning in the finish of the breech bolt. There are traces of case coloring visible on the nosecap, but the receiver has been lightly polished and has no finish remaining. There is a narrow ding in the left side of the barrel at the magazine hangar, and a small nick in the right side, also at the magazine hangar. The hangar has a deep drag line under its finish, and there are wirewheel marks under the finish of the magazine tube. There are a few very light marks in the barrel and magazine tube, light scratches on the sides of the receiver, and a string of tiny marks on the left side of the receiver. The screw heads are sharp. The markings are clear, but several are thin where they were polished. Overall, this rifle rates in about Fine condition as refinished.

Mechanics: The action functions correctly, but the lever is sticky on closing because the breech bolt is rubbing on the hammer. The hammer doesn’t have the half-cock notch it is supposed to, and the full cock notch is worn so that the hammer rides much higher than normal when it is cocked, resulting in it rubbing on the breechblock when the action is closed. We have not fired this rifle. As with all used firearms, a thorough cleaning may be necessary to meet your maintenance standards.

Our Assessment: Winchester’s first attempt at a lever action rifle capable of handling a rifle cartridge was the Model 1876, which was a heavier framed version of the Model 1873. However, the toggle-link action used in the gun was still limited to short cartridges like the .40-60 and .45-60 Win. The Model 1886 was made to handle longer cartridges like the .45-70 Govt., and the .45-90 Win. and .50-110 Win. cartridges. The Model 1886 utilized a locked-bolt action that was much strong than the M1876, and some seem to think it is faster and smoother as well. The Winchester Model 1886 was touted as a lever action express model, capable of handling any of the North American game animals. This rifle is chambered in .38-70 Winchester, a cartridge based on a necked-down .45-90 Win., not a .45-70. The cartridge was introduced in 1894, the year this rifle was made, and stayed in production until 1918. According to “Winchester Lever Action Repeating Firearms Volume 2” by Arthur Pickle, only 830 M1886 rifles were chambered in this caliber, making it the 2nd rarest caliber used in the M1886 after the .40-70 Win. This is an early M1886, made during the period when Winchester was producing the rifle with a case colored finish to the receiver, lever and nosecap. The finish on the barrel, magazine tube and lever have been professionally restored in blue, with the receiver lightly polished. While this is appealing to the eye, the lever has a noticeably different finish that it had originally. Also, the stocks and buttplate have been replaced. This is an extremely nice-looking rifle, so please see our pictures. With only 830 of the M1886 rifles chambered in .38-70, this rifle is extremely rare, and we suspect the collectors are going to be very interested.