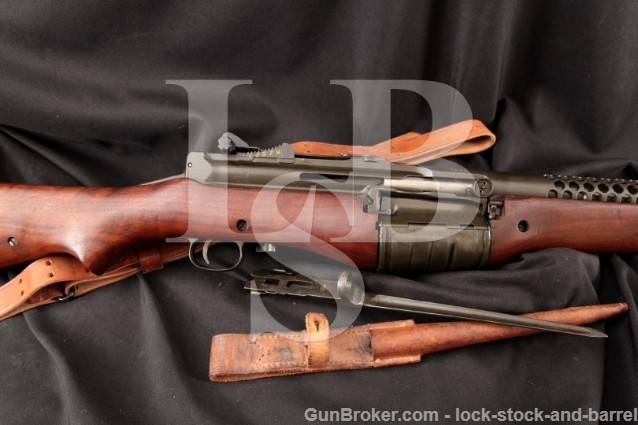 Markings: The top of the receiver is marked with 5 lines of patent information, the serial number, “CAL. 30-’06 SEMI AUTO.” and “’JOHNSON AUTOMATICS’ / MODEL OF 1941 / MADE IN PROVIDENCE, R.I., U.S.A.”. The right side of the bolt is marked “B6280”. Johnson rifles do not come with matching part numbers. NOTE, according to page 251 of Bruce Canfield’s book, Johnson Rifles and Machine Guns: “there apparently was no attempt at the Cranston Factory to assemble rifles with all matching parts”. The right rear of the receiver is marked “CRANSTON / ARMS / CO” in an inverted “triangle” with a small “star” above it. The “triangle” was the Dutch National symbol and the small “star” is a Dutch acceptance marking (page 251). The face of the metal barrel shroud is marked “.30-06” on top and “41” on the bottom; this piece of circular metal is attached to the barrel. The top rear of the barrel is marked “J.A. / .30-06”. The bayonets muzzle ring is marked “1629”. The following is from World of Bayonets “Serial numbering of the muzzle ring is believed to have been done by the Netherlands, indicating that this example likely saw service in the Far East with Dutch Naval Forces or the Koninklijk Nederlands Indisch Leger or KNIL (Royal Netherlands East Indies Army).” Page 252 of Canfield’s Book notes that the rifles were not marked at the factory and were most likely marked in the field by the Dutch.

Sights / Optics: The front sight is a post set between two protective ears. The rear sight is a fully adjustable aperture. The windage adjustment knob functions. The top of the sight is marked with a “0” and with hash marks. The aperture is set on an elevator that is marked “M2” on the left. It is marked “METERS 0-1000” and “1 3 5 7 9” on the right.

Stock Configuration & Condition: The two piece oil stained walnut stock has a pistol grip, several holes for mounting screws, a channel under the forearm for the takedown lever, a metal barrel shroud, two sling swivels and a metal buttplate. The hole on the right front of the forearm is a takedown button. It can be pressed with the tip of a bullet to release the barrel takedown lever that is on the bottom front of the forearm. The buttplate shows a few scrapes. The wood shows various light scrapes, small scratches & compression marks. These marks have been oiled over. The LOP measures 13 1/4 inches from the front of the trigger to the back of the buttplate. The stock rates in about Fine overall condition.

Bore Condition: The bore is semi bright and the rifling is deep. There is no visible erosion. The bore shows an M.E. of 0.2.

Overall Condition: This rifle retains about 97% of its metal finish. The barrel shroud shows light scrapes at the front. The metal shows various light handling marks and some discoloration from oxidation. The screw heads are intact. Most of the markings are deep. Overall, this rifle rates in about Excellent condition.

Mechanics: The action functions correctly. We have not fired this rifle. The bayonet secures to the rifle properly. As with all previously owned firearms, a thorough cleaning may be necessary to meet your maintenance standards.

Box, Paperwork& Accessories: The rifle comes the correct Johnson Model 1941 bayonet and scabbard; see worldbayonets.com. The bayonet mounts to the rifle properly. It shows scrapes from being mounted, dings on the edges and discoloration from oxidation. It is in about Fine condition. The leather scabbard shows discoloration, light scrapes and compression marks. The scabbard has not been oiled and retains most of its original light color. The scabbard is in about Very Good Plus condition. From worldbayonets.com: “…Triangular bayonet for the caliber .30-06 Johnson Model of 1941 self-loading rifle…The Model of 1941 was an innovative rifle design developed by U.S.M.C. Capt. Melvin M. Johnson as an alternative to the M1 Garand. The rifle’s recoil-operated action required a lightweight bayonet, which accounts for the bayonet’s skeletal appearance. Essentially, a socket bayonet without a socket, this bayonet mounts to the rifle by means of an ingenious flat spring. The scabbard is leather with a brass thorn to secure the hilt strap.”
The rifle comes with a Model 1907 leather sling. It is not a Johnson M1941 sling but is correct for a M1941 issued to US military personnel. The original slings were swapped out by military personnel with M1907 slings. An original M1941 sling is Rare (page 252 of Bruce Canfield’s book, Johnson Rifles and Machine Guns). The sling shows discoloration and scrapes. It is in about Very Good to Fine condition.

Our Assessment: Our Assessment: This Rare Johnson Automatics Model 1941 is in GREAT shape for a Military service rifle. The finish is original and the properly “aged” metal looks beautiful set in the hardwood stock. This M1941 even has a strong bright bore. We don’t see these rifles much as not many were made and those that are still around live in very nice safes with other very collectible rifles. This rifle was made as part of the Dutch contract to defend the East Indies. It is marked with a Dutch acceptance mark, a small “star” on the right rear of the receiver. After the Japanese overran the East Indies the Dutch had little use for many of their M1941 Johnsons. Some of these Dutch M1941 rifles were later used (liberated or stolen out of storage) by Marine Paratroopers who loved the fact that the rifle’s barrel was easily removed & replaced in order to break down the weapons for a jump. In 1942 and 1943 small batches of Dutch M1941 rifles were also purchased by the Marines. For more see Bruce Canfield’s book, Johnson Rifles and Machine Guns.
“Melvin Johnson was a gun designer who felt that the M1 Garand rifle had several significant flaws – so he developed his own semiauto .30-06 rifle to supplement the M1. His thought was that if problems arose with the M1 in combat, production of his rifle could provide a continuing supply of arms while problems with the M1 were worked out. The rifle he designed was a short-recoil system with a multi-lug rotating bolt (which was the direct ancestor of the AR bolt design). When the Johnson rifle was tested formally alongside the M1, the two were found to be pretty much evenly matched – which led the Army to dismiss the Johnson. If it wasn’t a significant improvement over the Garand, Ordnance didn’t see the use in siphoning off resources to produce a second rifle…The Johnson had some interesting features – primarily its magazine design. It used a fixed 10-round rotary magazine, which could be fed by 5-round standard stripper clips or loose individual cartridges. It could also be topped up without interfering with the rifle’s action, unlike the M1…Johnson was able to make sales of the rifle to the Dutch government, which was in urgent need of arms for the East Indies colonies. This is where the M1941 designation came from – it was the Dutch model name. Only a few of the 30,000 manufactured rifles were delivered before the Japanese overran the Dutch islands, rendering the rest of the shipment moot. At this point, Johnson was also working to interest the newly-formed Marine Paratroop battalions in a light machine gun version of his rifle. The Paramarines needed an LMG which could be broken down for jumping, light enough for a single man to effectively carry, and quick to reassemble upon landing. The Johnson LMG met these requirements extremely well, and was adopted for the purpose…Someone noticed that thousands of M1941 Johnson rifles (which could also have their barrel quickly and easily removed for compact storage) were effectively sitting abandoned on the docks, and the Para Marines liberated more than a few of them. These rifles were never officially on the US Army books, but they were used on Bougainville and a few other small islands.”