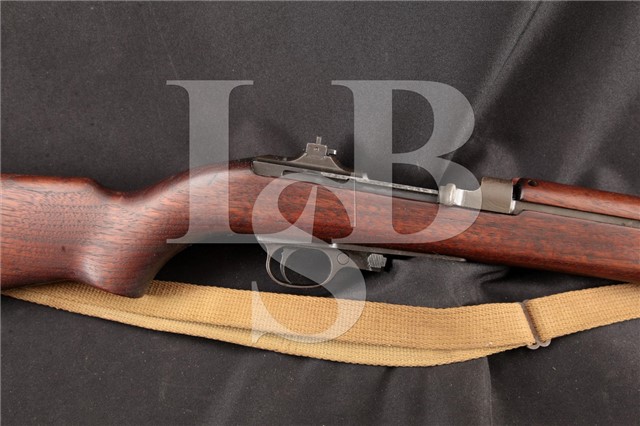 Markings: There is no visible import mark. The top of the receiver is marked “U.S. CARBINE / CAL. .30 M1” on the front and “INLAND DIV. / 2442” on the rear. The top of the barrel is marked “INLAND MFG. DIV. / GENERAL MOTORS / 7 – 42” and “P”. The barrel shank is marked with a “flaming bomb” and a few small inspection stamps. The right rear of the trigger group is marked “INLAND” which is an Inland mark (page 78 of Craig Riesch’s book, U.S. M1 Carbines Wartime Production 7th Edition). The hammer is marked with a “flaming bomb” and an “H in a shield”. The “H in a shield” is an early Inland mark (page 89). The serrated Type A magazine was used during 1942 production (pages 97). The checkered push button safety is beveled on the edge which makes it an Inland part (pages 93). The inside of the operating slide is marked “PI in a circle” which is an Inland mark (page 65). The bolt is marked “OI in a circle” on the right lug which is an Inland mark (page 36). The Type II recoil plate is unmarked which is consistent with Inland (page 135). The use of Type II recoil plates was implemented mid 1942 (page 133). The front sight is marked “N” which is consistent for Inland and others (page 56). The Type I rear sight is marked with a faded “S” on the left. All Type I sights are marked this way (page 27). The Type I barrel band is unmarked which is consistent with Inland & others (page 58- 59). The sling well is marked with an Ordnance Department “crossed cannons” cartouche, with a “flaming bomb”, “0” and “AI” which are Inland marks (page 108-109). The inside of the handguard is marked “flaming bomb” and “O” which are Inland marks (page 138).

Sights / Optics: The front sight is a post set between two protective wings. The rear sight is a flip up Type I dual aperture assembly.

Stock Configuration & Condition: The Type I stock has a pistol grip, metal barrel band with sling loop, sling well, sling pass through, and a metal buttplate. The stock has an “I” cutout for the oiler & sling. The right side of the stock shows a long crack from the top edge near the rear of the receiver to the area forward of the charging handle. This crack has been glued. The wood shows various scrapes, scratches and compression marks which have been oiled over. The LOP measures 13 1/4 inches from the front of the trigger to the back of the buttplate. The stock rates in about Very Good Plus overall condition as repaired.

Bore Condition: The bore is mostly bright and the rifling is crisp. There is a patch of light erosion near the muzzle. The bore shows an M.E. of 1.

Overall Condition: This rifle retains about 97% of its metal finish. The barrel shows some light scrapes & a few small scratches. The right side of the receiver shows some thinning from cycling. The finish shows light discoloration from oxidation. The screw heads are intact. The markings are deep. Overall, this rifle rates in about Very Good Plus to Fine condition.

Box, Paperwork & Accessories: The rifle comes with a canvas sling that shows discoloration, fraying and soiling. It is in about Very Good condition.

Our Assessment: This first year production M1 Carbine was made in 1942 with a low serial number “2442” and an early Type I trigger housing retaining pin. The retaining pin was made with a retaining spring so you wouldn’t lose it in the field (page 79 of Craig Riesch’s book, U.S. M1 Carbines Wartime Production 7th Edition). The rifle has lots of nice markings which are consistent with an early manufacture Inland M1 Carbine. Best of all it is an all Matching Inland M1 Carbine. This is a nice M1 for your collection. Good luck.