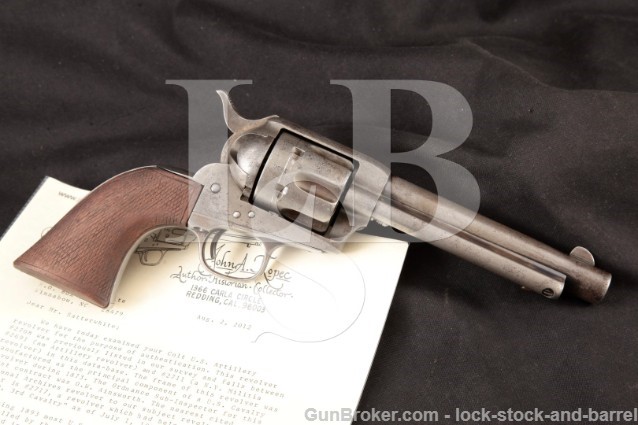 Year of Manufacture: The Frame was manufactured in 1874

Sights / Optics: This revolver is mounted with a “V” notch in the top strap for a rear sight and a quarter round blade front sight fixed to the barrel.

Stock Configuration & Condition: The grip is a one piece hand checkered piece of walnut that is dark with oil staining but cleaned and lightly sanded at the time of the checkering. There are several dings and scratches to the surfaces, with some warping. The surfaces are dry and rough to the touch, and the work was imperfect. There is some shrinkage affecting the fit. The grips are in about Fair – Good overall condition.

Type of Finish: The pistol is blued.

Finish Originality: None Remains… Possibly refinished at time of assembly.

Bore Condition: The bore is between bright and gray with light wear in the rifling. There is light erosion the length of the bore but it is definitely better than average.

Overall Condition: This revolver retains about 2% of its current metal finish in protected areas only. The surfaces are generally gray/brown with scattered erosion, some pitting on the cylinder and soft edges. That said, the metal to metal fit is still very good, the markings are still very legible and though a bit eroded, we like the general condition of the metal. The screws are distressed but are all still serviceable. The markings are all still clear. Overall, the revolver is in about Good condition.

Mechanics: The cylinder lockup shows a small amount of play on all six chambers. The trigger pull is light and crisp. The action functions correctly. We have not fired this revolver. As with all used firearms, a thorough cleaning may be necessary to meet your maintenance standards.

Our Assessment: This revolver started out life in 1874, the 2nd year of production, as a Calvary Model SAA revolver with 7 ½” barrel made for the U.S. Army. In their book “Colt Calvary and Artillery Revolvers”, Kopec and Fenn indicate that between 1900 and 1903, Colt altered and refinished 5444 revolvers into Artillery models (5 ½” barrel) with serial numbers between 177 and 8762. Per Kopec and Fenn, “A single Artillery revolver often will have parts from three or four different Cavalry revolvers”.

We believe that this is one of those 5444 revolvers converted by Colt into an Artillery model. The cylinder retains its “DFC” inspection mark, with different inspector initials on other parts… The revolver is in about Good condition with 5% of its finish remaining. The bore is gray with light wear in the rifling and the cylinder lockup shows a small amount of play.

This revolver probably saw service during the Indian Wars and later again in the Philippines after being converted to an Artillery model (if not during the Philippine-American war, then in the Moro Rebellion). This revolver must have a very interesting history, if only it could be told. All of the Colt 1st Generation revolvers are heavily collected, and this very early Cavalry Model conversion to Artillery Model will not be an exception.