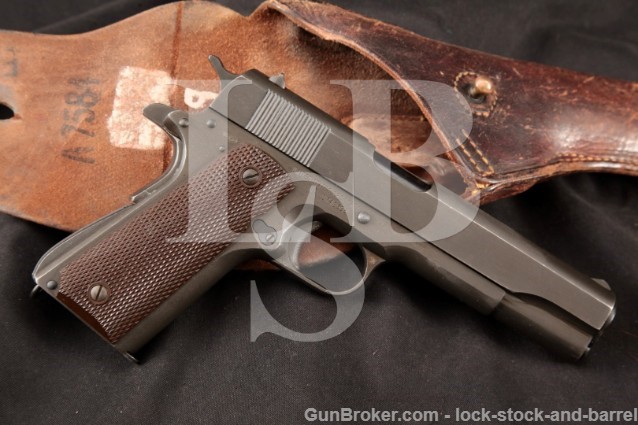 Stock Configuration & Condition: The grips are checkered reddish-brown reinforced Keyes panels. The left is a #18 and the right a #21, both are marked with the star inside. There are a few light handling marks on the smooth bottom surfaces of the grips. The checkering shows only light wear and is now without mars. The grips rate in about Fine to Excellent condition.

Type of Finish: The slide and frame have a dark grey parkerized finish. The barrel is blued. The mainspring housing is serrated and the trigger is finely knurled.

Finish Originality: The finish is original. (see the ordinance wheel)

Overall Condition: This pistol retains about 93% of its metal finish. There is thinning on the edges of the slide, safety, sights and mainspring housing. the right side of the dust cover has a rub through the finish. There are a few very light handling marks throughout, but this is a very sharp pistol. the thumb safety shows mottled finish loss and is really the only instance of surface erosion. There is a mark through the finish on the left side of the slide underneath the slide release. The serrations on the slide, slide release and mainspring housing are sharp, the knurling on the hammer shows little wear and the knurling on the magazine release is sharp. The grip screws are sharp and the markings are crisp. Overall, this pistol rates in about Fine – Excellent condition.

Mechanics: The trigger pull is crisp. The slide is tight to the frame. This pistol has manual and grip safeties, and this model does not have a magazine disconnect. The action functions correctly. We have not fired this pistol. As with all used firearms, a thorough cleaning may be necessary to meet your maintenance standards.

Box, Paperwork & Accessories: This pistol comes with a brown GI flap holster in Fair-Good condition. The markings on the back are not clear any longer but appear to read “… SADDLERY / 1944”. .

Our Assessment: The 1911 and 1911-A1 pistols served the military of the United States from 1911 to 1985, through two World Wars and the Korean and Vietnam wars. They gained a reputation as a reliable handgun with plenty of stopping power, and are held in high regard by those who have used them. This is a 1911-A1 pistol made by Remington Rand in 1944 during WWII. It is correctly marked for a Remington produced pistol and has a barrel by High Standard, who supplied barrels to Remington Rand. The pistol is in about almost Excellent condition with 93% of its parkerized finish remaining. The bore is bright with sharp rifling and no erosion.

In his book “Colt .45 Service Pistols”, page 313, Clawson indicates that by the end of the war, Remington Rand produced the lowest cost pistol and that “during 1944 and 1945 they produced a superior weapon, equal to or better than those produced by other companies”. This says a lot for Remington Rand, despite having a few problems in the early part of 1943 as they tried to ramp up production. This is a fantastic package for the serious collectors of WWII pistols and 1911A1’s in particular. Early 1944 pistols with a finish this nice are hard to find anymore. Please see our pictures and good luck!