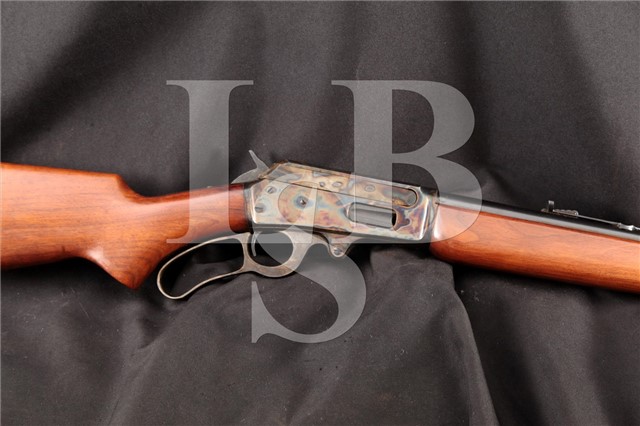 Stock Configuration & Condition: The stocks are two-piece walnut with a lacquered finish. The buttstock has a pistol grip with a black serrated hard rubber buttplate. The perch belly forend curves up sharply at the rear to conform to the edges of the receiver and has a blued steel nosecap. There are sling swivels mounted in the belly and the underside of the forend, and a “Marlin Bullseye” in the belly of the stock. There are a few light handling marks scattered over the stocks, with a few shallow dings on the left side of the forend. The LOP measures 13 3/8” from the front of the trigger to the back of the buttplate. The buttplate shows minimal wear and is in Excellent condition. The stocks rate in about Excellent condition.

Type of Finish: The rifle is blued with a case colored receiver, lever and lower tang.

Bore Condition: The bore is bright and the rifling is sharp. There is no erosion in the bore. Our bore gauge measures a ME of 0.8.

Mechanics: The action functions correctly. The lever is tight and the action is relatively smooth. The hammer has a half-cock safety. We did not fire this rifle. As with all used firearms, a thorough cleaning may be necessary to meet your maintenance standards.

Our Assessment: This is a Marlin Model 1836 lever action rifle with a 24” barrel, 2/3 magazine tube, and chambered in .30-30 Win. This model was only made for a little longer than a year, from 1936 into the first months of 1937. It was intended as a stop-gap between the prior Model 1893 and the Model 36, which was in design in1936 with a release date in 1937. This model was made with the flat bolt of the M1893 and the early 1st Variation had a fluted comb, but this 2nd Variation has the non-fluted comb of the Model 36. The first variation had no prefix in the serial number, the 2nd variation had a “B” and the Model 36 rifles started with a “C”. Most of the 1936 variation were the 1st Variation, with most of the 2nd Variation made in the early months of 1937. The rifle has very few handling marks, but there are thin strips of varnish along the sides of the barrel just above the forend that would have us believe the stocks have had a coat of varnish applied since they left the factory, probably directly over their original finish. This is a very rare model, and the 2nd Variation is even rarer, having been made for only a few months. This is a must-have for any collector of Marlin rifles and to find one nearly unmarked is a fantastic opportunity to add one of these to your collection.