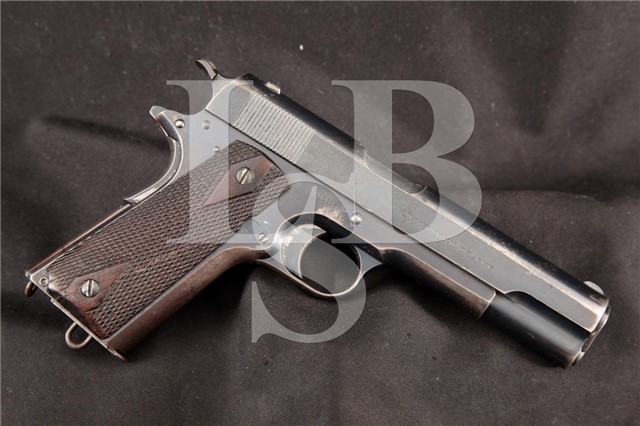 Sights / Optics: The pistol is mounted with a “U” notched round-top rear sight, dovetailed into the slide and a short rounded blade front sight fixed to the slide. The front sight blade is tapered and both sights are correct for the range.

Stock Configuration & Condition: The grips are checkered walnut that are dark with oil staining, a little smooth from handling and showing a repaired crack in the right panel. 15 rows of checkering are between the large diamonds on the right panel and 15 rows are between the diamonds on the left panel. The panels both show general handling wear, surface marking, wear around the screw holes and a few damaged checkers. That said, the grips are complete and still relatively sharp, but with the repair, the rating is only about Fair overall condition.

Type of Finish: The finish is known as Colt’s Fine Finish, which had small parts “showing a slight tinge of fire blue”. This finish was approved and used after serial number 2400 and before 1917 when the finish was modified again to a more Brushed Blue look.

Bore Condition: The bore is a little gray and the rifling is sharp. There is light erosion trending towards mild pitting in the grooves. The bore is still a 5 out of 10.

Overall Condition: This pistol retains better than 60% of its metal finish. There is surface loss to gray on the right and left sides of the slide, mainspring housing, front strap and trigger guard. The edges have also drifted towards gray, while the grip straps and trigger guard are now largely brown. There is some mild etching to the bare metal. The slide shows holster wear and there is thinning on the right side of the frame above the trigger from a trigger finger. Despite this wear, it is all honest and the majority of the original finish is retained. The serrations on the slide are sharp. The hammer and safety knurling show only light wear and the knurling on the slide release and magazine release are still attractive. The takedown mark is visible and there is some surface marking here as well from poor reassembly. The grip screws are a little distressed. The markings are clear. Overall, this pistol rates in about Fine condition.

Box, Paperwork & Accessories: This pistol comes with one (now brown) originally two-tone, pinned, lanyard loop magazine. The magazine shows thinning and surface loss and is spotted with solid erosion. The magazine is in about Fair condition.

Our Assessment: Almost every modern handgun can trace its roots to the 1911, or the continuing “attempt” to improve the design. The 1911 and 1911-A1 pistols served the military of the United States from 1911 to 1985, through two World Wars and the Korean and Vietnam wars. They gained a reputation as a reliable handgun with plenty of stopping power, and are held in high regard by those who have used them – in fact, we and many others will tell you it is the greatest gun ever designed.

This is a U.S. Government issue Colt 1911 pistol made in late 1912, the first year! The pistol is in about Fine condition with about 60% of its original blued finish remaining. First year guns are about the most desirable of them all, especially when they are parts correct and attractive like this one. This is a nice and honest pistol, in a seldom encountered shipment of 450 guns to the Commanding Officer at Augusta Arsenal in Ga. on December 6th 1912. This is certainly a gun worthy of a collection, please see our pictures and good luck!