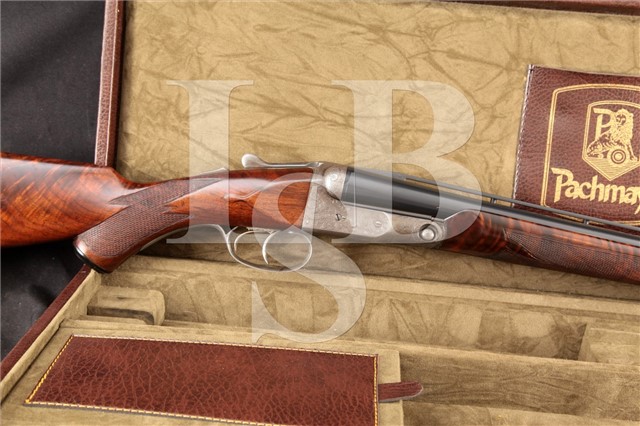 Action Type: Side by Side, Double Non-Selective Trigger Shotgun with Ejectors

Sights / Optics: This shotgun is mounted with a front bead, set into the ventilated rib; the top of the rib is milled in a wave-like pattern for glare reduction, the details are still highly formed.

Stock Configuration & Condition: The stocks are a two piece walnut set. The beavertail forend has underside checkering; the wood is slightly proud to the metal, all of the checkers are still defined, there are a few compressions scattered throughout. The forearm has no chips or cracks. The butt stock has a checkered grip area on its capped pistol grip, with few scattered compressions throughout. There are no chips or cracks in the buttstock. Drop at comb is 1 3/4”, drop at heel is 2 1/2″, the cast is about neutral. The LOP measures 13 3/8″ and 12 7/16″ from the trigger to the back of the wooden portion of the stock (not including the buttpad). The checkering is in a fancy pattern and the buttstock has a simple raised design on either side immediately behind the receiver. The stocks rate in Excellent overall condition.

Overall Condition: This shotgun retains about 85% of its original finish. The balance of which is found in muted to lost case color on the receiver. Receiver color is strongest on the top of and underneath the thumb latch, followed by the bottom of the receiver. The bottom tang has lost the most finish. Engraving is still sharp on the setter scene (left side), the pointer scene (right side), the pigeon scene “bottom” and scrollwork and markings throughout. Color is still strong in the forend bracket and latch. Engraving is still sharp on the forend engraving as well. The barrels retain nearly all of their finish with only a few minor handling marks. The wave pattern on the top rib stops a fraction of an inch from the muzzle and the barrels meet at the muzzle indicating that the barrels have not been cut. The wave pattern stops as the vent rib descents towards the receiver, replaced with a stippled texturing surrounding a shallow, concave, triangle-shaped trough pointed towards the user with a different, checkered pattern on the squared doll’s head barrel extension. The beavertail forend, ejectors, and vent rib are all optional extras (manufacturer code 20) which were provided by Parker Brothers at the factory per “Parker Gun Identification & Serialization” by Charles E. Price and S.P. Fjestad in which this shotgun is recorded by serial number (p581). Overall, this shotgun is in Excellent condition.

Mechanics: The action functions correctly. The shotgun features dual non-selective triggers and ejectors; the tang mounted safety returns to ‘safe’ when the action is opened. The shotgun weighs 7lbs 9oz with no play in the frame to barrel fit. The hammers fall with authority and the triggers are crisp. We have not fired this shotgun. As with all used firearms, a thorough cleaning may be necessary to meet your maintenance standards.

Box, Paperwork & Accessories: This shotgun comes in a brown leather hard-sided Pachmayr case with brass fixtures and English style leather straps. The interior of the case is felt lined with separate compartments for the receiver and buttstock assembly which has a leather and velcro strap to secure the assembly, the barrel, and forend assembly, a compartment with a leather pull-tab operated leather topped lid which contains the straps, and a fourth long, thin compartment. The exterior of the case has raised corners on top and bottom with stitching around the raised sections and at the corners. The stitching and exterior of the case are in Excellent condition. The interior and felt lining are in Excellent condition. Overall, the case is in Excellent condition. The case has combination locking latches at either end.

Our Assessment: Parker Brothers was one of the original makers of fine quality double-barreled shotguns in the United States. While other companies had offerings in the double-barreled shotgun market, Parker Brothers focused on making nothing but. Their dedication, attention to detail, and experience shine in this example of their work. Not content with factory upgrades which are documented in the most authoritative reference source for these shotguns, it also comes with a beautiful case in even better condition than the gun. While this shotgun will really shine as a presentation piece, it will also make its owner the envy of the shooting range and perform up to or even beyond the abilities of its user. Please see our photos and good luck!