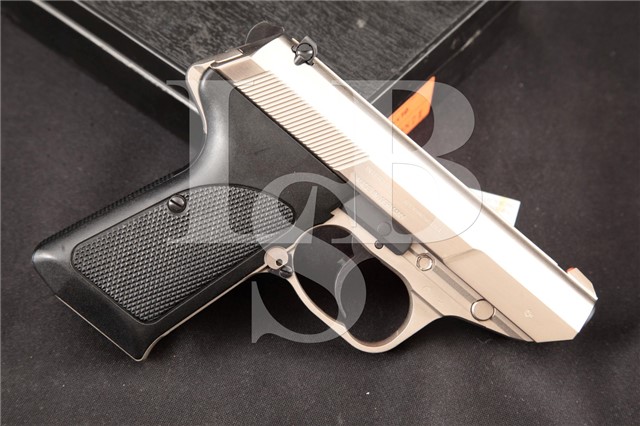 Make: This pistol was manufactured by Carl Walther in Germany.

Action Type: Single or Double Action Semi-Auto with 8 Round Removable Magazine (Magazines hold the same 8 rounds as the full-sized P5).

Sights / Optics: The front sight is a low-profile blade with a red dot that is fixed to the slide. The rear sight is a square notch dovetailed into the slide with a white dot on both sides of notch. The top of the slide has a thin rib, which is serrated to reduce glare.

Stock Configuration & Condition: The grips are black checkered plastic that enclose the backstrap. In addition to the sides of the grip, the mainspring housing is also checkered. The non-checkered areas are lightly textured. The checkering is sharp with the faintest of wear in the right grip. There is also a very light mark in the area above the checkering in the right grip. The grips rate in about Excellent overall condition.

Type of Finish: The gun appears to have a Nickel finish

Finish Originality: We scoured the internet, but never found any indication that this pistol was made in other than a blued finish. It appears original to us.

Overall Condition: This handgun retains about 99+% of its metal finish. There is a very light mark on the exposed part of the barrel at the port. The slide serrations are sharp. The markings are clear, except for the markings on the right side of the frame, which are very faint. Overall, this handgun rates in about Excellent condition.

Mechanics: The action functions correctly. The double action trigger pull is relatively smooth and the single action pull has a small amount of creep. This pistol has a decocker. With the slide locked back, the first depression of the decocker releases the slide into battery. The second depression lowers the hammer without firing the pistol. There is a curved “safety” in front of the decocker that is used to lock the slide back without a magazine inserted by pushing it up. We did not fire this handgun. As with all used firearms, a thorough cleaning may be necessary to meet your maintenance standards.

Our Assessment: The P5 was a further development of the famous Walther P38 and P1 series. Development began following requests by German police and federal agencies for a new sidearm. Walther engineers decided to use the P1 model as the basis of the P5 and gave it a similar locking system, reinforced frame, and dual recoil springs. In addition, the Walther improved the extractor, shortened the barrel, and increased the slide length. Safety was enhanced by utilizing an innovative pivoting firing pin that can move forward only when the trigger is pulled. In addition, the P1’s slide-mounted decocker/safety was moved to a frame mounted decocker/slide stop multi-lever. The P5 was in production from 1978 until 1993, and underwent 7 design changes, resulting in 8 variations. The P5 Compact was a smaller and lighter version of the P5, with only 6500 made for the commercial market and 3000 for the British Army which adopted it as their Model L102A1. This P5 Compact is in about Near Mint condition, with the only a small mark on the exposed area of the barrel at the port. We could not find any information about this model ever being manufactured in any finish other than Blue, making this an extremely interesting piece. The bore is bright with sharp rifling and no erosion. This pistol may have been shot once or twice since it left the factory, but certainly not very many times. This is a great find for a Walther collector as there weren’t very many made, making it very rare.