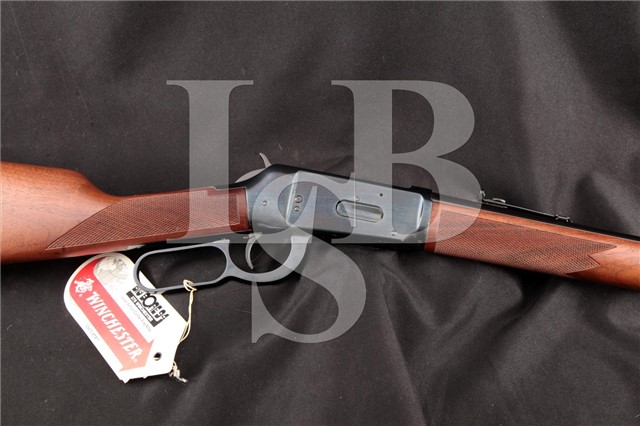 Sights / Optics: This carbine is mounted with a “U” notched rear leaf sight mounted in a dovetail and on a slide-step elevator. The front sight is a beaded blade, dovetail set in a base that is dovetailed onto a matted ramp base and covered with a blue steel sight hood.

Stock Configuration & Condition: The stocks are checkered walnut. The forend has a blue barrel band, the butt stock has a strait wrist and thin red rubber recoil pad. We were unable to find any notable marks besides one or two tiny dings on the left side of the stock. The rifle does not look to have seen much handling or use. The LOP measures 13 1/2” from the front of the trigger to the back of the red rubber recoil pad; the pad is set with a black spacer and shows a few small rub areas, without notable damages, in Excellent condition. The stocks rate in about Excellent overall condition.

Overall Condition: This rifle retains about 99% of its metal finish. The rifle does not have any notable damage or even marks that draw attention. We are close to calling this one un-fired out of the factory, within a few rounds, but we don’t ever like to assume that. The screw heads are sharp. The markings are crisp. Overall, this rifle rates in about Excellent condition.

Mechanics: The action functions correctly. The tube magazine holds 6 shots, the rifle weighs 6 1/8 lbs. The rifle has a lever safety and a half-cock hammer safety. We have not fired this rifle. As with all previously owned firearms, a thorough cleaning may be necessary to meet your maintenance standards.

Box, Paperwork & Accessories: The original hang tag is still on the rifle.

Our Assessment: “The Winchester Model 1894 rifle (also known as the Winchester 94 or Win 94) is a lever-action repeating rifle that became one of the most famous and popular hunting rifles. It was designed by John Browning in 1894 and originally chambered to fire two metallic black powder cartridges, the .32-40 Winchester and .38-55 Winchester. It was the first rifle to chamber the smokeless powder round, the .30 WCF (Winchester Center Fire, in time becoming known as the .30-30). The 1894 was produced by the Winchester Repeating Arms Company through 1980 and then by U.S. Repeating Arms under the Winchester brand until they ceased manufacturing rifles in 2006. Reproductions are being made by the Miroku company of Japan and imported into the United States by the Browning Arms company of Morgan, Utah. The Model 1894 has been referred to as the “ultimate lever-action design” by firearms historians such as R. L. Wilson and Hal Herring. The Model 1894 is the rifle credited with the name “Winchester” being used to refer to all rifles of this type and was the first commercial sporting rifle to sell over 7,000,000 units…

The .375 Winchester is a modernized version of the .38-55 Winchester, a black powder cartridge from the 1880s. It was introduced in 1978 along with the Winchester Model 94 “Big Bore” lever action rifle. Though very similar in appearance to the parent .38-55, the .375 has a shorter case length and operates at much higher pressures (50,000 CUP).”

This is a 1979 manufactured Big Bore 94 in .375 Winchester, which is enough cartridge for nearly all of North America’s big game. The rifle doesn’t look to have put more than a handful of rounds down range, some of which were at the factory. This is a first or second-year rifle in damn near MINT condition. Please see our pictures and good luck.