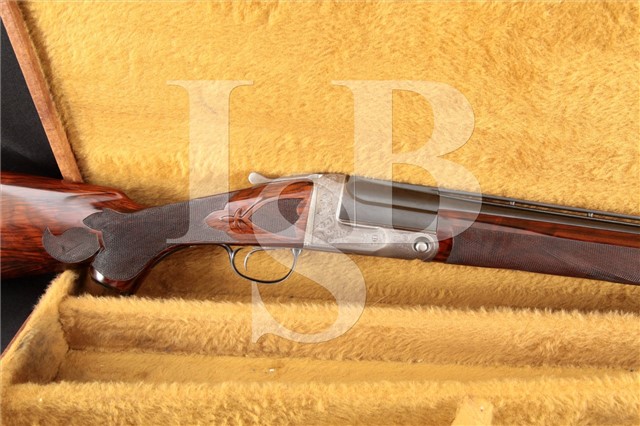 Markings: The left and right sides of the receiver are marked “PARKER BROS.”, the water table is marked “PAT’D OCT. 25, 1910. / C / 178184 / 4”, the interior of the trigger plate, visible between the lugs of the water table, is marked “184” and the lower tang behind the trigger guard is marked “178184”. The receiver, lever, and trigger guard are finely engraved with scroll engraving with fine stippling in the area without scrollwork. The all-scroll trigger plate is indicative of the early production guns and considerably more rare than the later pigeon scenes which would become standard. The interior of the forearm bracket is marked “178184 PATD, MAY 7, 1901” and the external portions of the forearm bracket are also engraved and stippled. The rib of the barrel is marked “PARKER BROS. MAKERS. MERIDEN CONN. MADE IN. U.S.A.” and has wavy matting which stops a fraction of an inch from the muzzle.

Sights / Optics: This shotgun is mounted with a white front bead installed onto the rib and a smaller, white mid bead. Also included is a replacement white front bead set in a mount which raises it up off the rib slightly.

Stock Configuration & Condition: The stocks are a two piece walnut beautifully figured set with a bright finish. The tapered beavertail forend has an ebony insert at the front and checkering; the checkering is still well defined. The forend has a series of four vertical compression lines in front of the checkering on the left side and three in a similar location on the right. The forend has no cracks or chips. The butt stock has a raised comb and checkered grip area on its squared off pistol grip with a cap of dark wood with gold hue. The cap has a gold nameplate inlayed which is blank. In addition to the grip checkering, there are shield-shaped checkered areas on the flats immediately behind the recevier. The flats terminate in a raised fleur de lis whose shape is echoed in the border shape of the grip checkering. There are two light compressions on either side of the comb and a few very light handling marks. Drop at comb is 1 7/16”, drop at heel is 1 1/2″, the drop at the rear of the raised portion of the comb is 1 1/4″ the cast is about neutral. The LOP measures 14 1/8″ from the front of the trigger to the back of the brown ventilated rubber, aggressively serrated Pachmayr White Line pad. The stock appears to be a replacement as it was constructed from at least three pieces. There are very fine seams between the comb and toe line and the center portion of the stock. There is also a very fine V-shaped seam behind the lower tang. The stock also appears to be a replacement as the raised fleur de lis does not appear on other examples of C grade Single Barrel Trap Guns we have found photos for. As a replacement stock it is of very high grade wood, very well fit and finely checkered. The stocks rate in about Excellent overall condition as replacements.

Overall Condition: This shotgun retains about 70% of its original finish. The barrel retains nearly all of its blued finish with a thinned area on the right side near the breech and some light handling marks. The receiver has lost nearly all of its case-color with what little remains concentrated in the trigger plate under the trigger guard and on the top tang near the front of the lever. Finish on the trigger guard has thinned on the edges. The receiver has only a few light handling marks. Overall, this shotgun is in Fine condition.

Mechanics: The action functions correctly including the ejector. We have not fired this shotgun. As with all used firearms, a thorough cleaning may be necessary to meet your maintenance standards.

Box, Paperwork & Accessories: This shotgun comes in a brown leather English style hard-sided case with two leather wrap-around straps, steel fixtures and leather carry handle. The interior of the case is felt lined separate with compartments for the receiver and buttstock assembly with a leather strap to secure it, the barrel and forend assembly, a compartment for an additional (not included) barrel assembly and a fourth compartment for accessories. The exterior of the case has light wear at the edges and on the bottom face of the English style straps. The front of the case near the carry handle has been labeled “PARKER C” on red label. The lid of the case has a name plate which is not marked. The interior and felt lining are in Excellent condition with only minor wear at the bearing surfaces which contact the firearm. Overall, the case is in Very Good-plus condition. The key for the lock is not included. Also included in this case is the spare bead as described in the Sights / Optics section.

Our Assessment: This Fine condition Parker Brothers SC Grade Single Barrel Trap Gun comes to us from 1917. This was the first year of production for the Single Barrel Trap and only about 1900 of these were ever made. While it has lost much of its case color, the receiver is no less beautiful for it thanks to the wonderful engraving and its being surrounded by beautiful wood, which may have been installed after purchase. Even so, the stock was clearly made and installed by a talented professional. With blank name plates on both the shotgun and the fine quality case included, this is just waiting for you to put your name on it. Please see our photos and good luck!