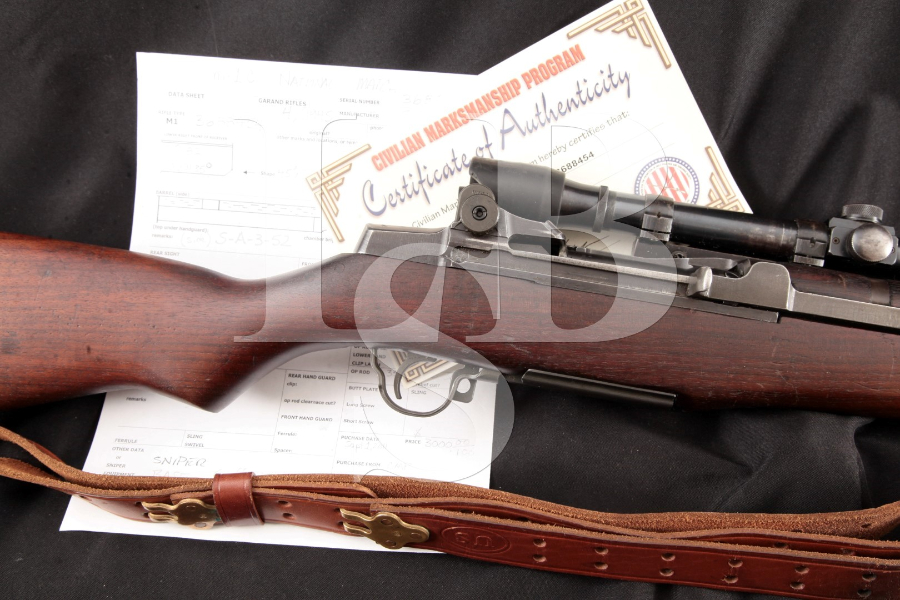 The 2.5 fixed power scope uses a crosshair reticle. The glass appears clear and the adjustment knobs turn. The rubber eye piece shows scrapes & scratches. The scope tube uses scrapes, small scratches & discoloration from oxidation. The front sun shade slides back & forth. Overall the scope is in about Very Good Plus condition. The scope base assembly & rings show scrapes, discoloration and some pin prick surface erosion. The screw heads show use. Overall the scope base & rings are in about Very Good condition.

Stock Configuration & Condition: The face of the pistol grip is marked with a faded “P” proof. The bottom of the grip is marked “2”.  The three piece stock has a pistol grip, metal nose caps, 2 sling loops, a stacking loop and a metal buttplate with a hinged door for storage in the butt. There are cleaning tools stored in the butt. The wood shows several scrapes, scratches & compression marks. Several are deep and have removed small amounts of surface wood. These marks have been oiled over. The LOP measures 13 1/4 inches from the front of the trigger to the back of the buttplate. The stock rates in about Very Good Plus overall condition.

Bore Condition: The bore is bright, semi bright at the muzzle. The rifling is deep. There is no erosion. The bore shows an M.E. of 1.2. The throat shows a T.E. of 2.

Overall Condition: This rifle retains about 96% of its metal finish. The barrel, gas tube & trigger guard show various scrapes. The right side of the receiver shows thinning consistent with cycling. The receiver edges show light thinning. The metal shows various other scuffs & handling marks. The screw heads show some use. The markings are deep. Overall, this rifle rates in about Very Good Plus to Fine condition.

Box, Paperwork & Accessories: The rifle comes with a Commercial Lyman Alaskan scope and a 2 piece Griffin & Howe mount; see above.

A 4 piece cleaning rod is stored in the butt. It is held in a torn & soiled nylon pouch. The rods show oxidation. There is no loop. Overall the cleaning tools are in about Good condition. The rifle comes with a leather sling marked “US”. It shows scrapes, creasing and some discoloration. It is in about Very Good Plus to Fine condition.

Our Assessment: This is a Springfield Armory M1C Garand; a Garand Sniper. It is in nice shape with a strong bright bore. This M1C comes with a correct Commercial Lyman Alaskan Scope (there were other M1C scope variations) and the proper Griffin & Howe mount. The rifle has been Arsenal Rebuilt and has a 1952 dated barrel. All of the major components are Springfield Armory parts. This is a Rare rifle that is highly collectible. It has great markings and important CMP paperwork is provided. The CMP Certificate lists the rifle’s serial number and lists the rifle as an “M1C Garand”.

According to our consignor this M1C rifle was built by Master Sergeant Gerald “Hook” Boutin. Master Sergeant Gerald Boutin was involved in sniper training in Vietnam from 1965 to 1971. The consignor also advises that the rifle has been back to the “Old World Craftsmen” at Griffin and Howe where it was fitted with the Lyman Alaskan Scope & Mount per WW II specifications. According to the consignor the Lyman Alaskan Scope has been to Ironsight Inc. and reconditioned (http://www.ironsightinc.com/).

The following is from Master Sergeant Gerald “Ol’ Hook” Joseph Boutin’s obituary posted at http://www.hutchesonsmemorialchapel.com/obits/obituary.php?id=551382: “Hook was retired from the United States Army with thirty years of honorable service. He served in combat in World War II, seeing combat action in the Battle of the Bulge, Belgium, France and Germany, the Korean War and two tours of duty in Viet Nam retiring from the Army in 1974. After his Army retirement he continued his work as a civilian with the U.S. Army Marksmanship Training Unit shops continually seeking better improvements on service weapons for competition and sniper weapons platforms. He was instrumental in developing the accurizing techniques for the M1 Garand and the M14 rifle systems for those purposes. He is a double inductee into the United States Army Marksmanship Training Unit Hall of Fame both for his work as an exceptional armorer and for his accomplishments in long range shooting to include international skeet shooting”.