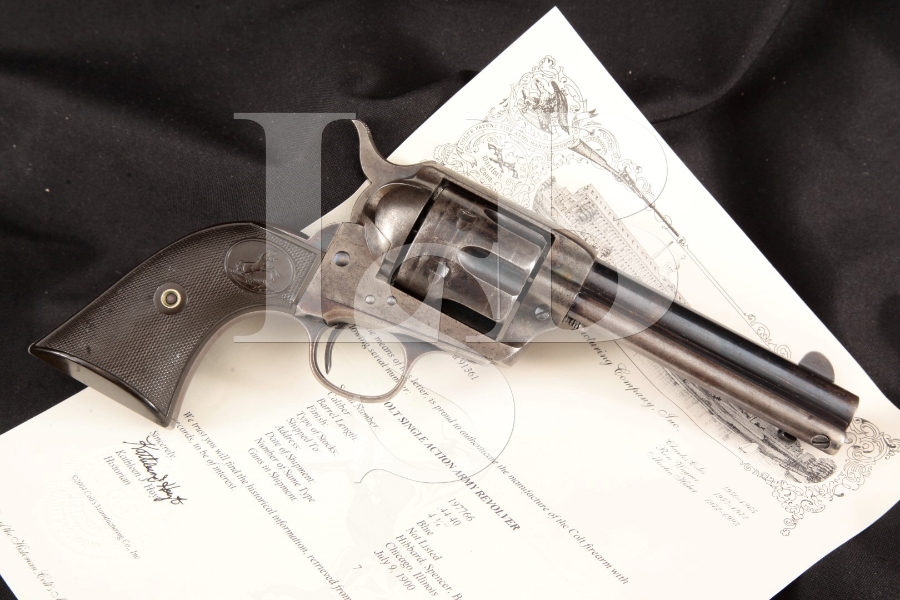 Sights / Optics: The front sight is a tall quarter-round blade fixed to the barrel. The rear sight is a “V” groove in the top strap.

Stock Configuration & Condition: The grips are black checkered hard rubber with an ovalled Rampant Colt logo at the tops of the grips. The smooth borders show a few tiny nicks and a wide shallow bruise at the lower edge of the left grip. The checkering shows light wear with a light mar near the rear lower corner of the right grip. The grip rates in about Fine Plus condition.

Type of Finish: The revolver is blued with a case colored frame and hammer.

Bore Condition: The bore is gray with light to moderate wear in the rifling. There is moderate erosion scattered over the bore.

Overall Condition: This revolver retains a lot of its original metal finish. There are tiny spots of solid erosion scattered over the frame and the flutes of the cylinder, with spots of pinprick surface erosion on the right side of the barrel and the circumference of the cylinder, with slightly heavier erosion on the ejector rod housing. There is thinning in the barrel, the sides of the trigger guard and backstrap, the underside of the backstrap and the cylinder, with surface loss on the ejector rod housing, the underside of the trigger guard and the backstrap. The case coloring on the frame is muted and is developing a gray patina. There are small dings scattered over the underside of the barrel and at the front of the ejector rod housing, with a few deep scratches in the left side of the barrel. There is a ding at the right front of the frame at the rear of the ejector rod housing, a gouge on the left side of the trigger guard, and a few small dings in the cylinder. The cylinder shows a light drag line through the bolt stop cuts and two more behind the bolt stop cuts. The hammer knurling is sharp. The screw heads are sharp and the markings are clear. Overall, this revolver rates in about Very Good to Fine condition Regarding the finish. It should be downgraded for the slight operational issue.

Mechanics: The cylinder turns when the hammer is cocked and the hammer falls when the trigger is pulled. The hammer has ¼ and ½ cock safety positions. However, the bolt does not rise to lock-up the cylinder. We suspect the bolt spring is broken. We did not fire this revolver. As with all used firearms, a thorough cleaning may be necessary to meet your maintenance standards.

Box, Paperwork & Accessories: This revolver comes with a letter from Colt stating it was shipped on July 9, 1900 to Hibbard, Spencer, Bartlett & Company of Chicago, Illinois.

Our Assessment: Winchester developed the .44-40 W.C.F. round for their Model 1873 rifle, and Colt offered in their Model 1873 pistols starting in 1878, giving them the designation “Frontier Six Shooter”. Settlers, cowboys and lawmen appreciated the convenience of being able to carry a single caliber of ammunition which they could fire in both pistol and rifle. In both law enforcement and hunting usage, the .44-40 became the most popular cartridge in the United States and to this day has the reputation of killing more deer than any other save the .30-30 Winchester. This is an Early Smokeless Powder Colt 1st Generation Frontier Six Shooter in .44-40 Win. with a 4 ¾” barrel. Its serial numbers are matching and it still has its original blue finish with a case colored frame. This is a well preserved revolver but the bolt is not operable, probably due to a broken spring. The 1st Generation Colts are very collectible, and this one isn’t going to be an exception. There are dozens of variations of Colt SAA revolvers to collect between the three generations, blackpowder vs. smokeless frames, army marked vs. civilian, etc. making it almost impossible for the collector to obtain one of each, and making all of them desirable. If the only problem is a broken spring, Wolff makes a sear/bolt spring replacement for about $6.50 that is available from a number of sources.