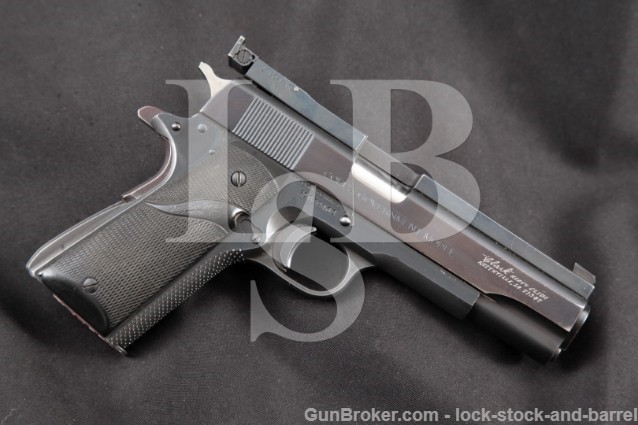 Stock Configuration & Condition: The grips are two-piece checkered rubber Pachmayr scales. The right panel has a small loss at the bottom rear corner at the edge of the cutout for the mainspring pin. Both scales show light wear from honest use. Overall, the grips are in Fine condition.

Overall Condition: This handgun retains about 85% of its metal finish. The finish is thinning at most edges, most prominent at the front corners of the slide. The heavy rib has light scratches along the left side with the worst being about 2″ behind the front sight with a similar mark beneath on the left side of the slide. The right side of the heavy rib likewise has light marks throughout with one deeper scratch approximately 1.5″ behind the front sight. The right side of the dust cover has a series of marks at the top. The left side of the frame has a light takedown mark. The trigger has had a wide shoe installed and the front strap has been stippled with punch marks raising a small amount of material in a very regular pattern in the Clark Custom style. This handgun would be in Very Good-plus condition, but given the bulges in the barrel is only in Good condition, overall.

Mechanics: The action functions correctly. There have been numerous upgrades to this gun including parts, polishing of surfaces, and fitting. Everything appears to work together well delivering a tight fit and smooth action. The barrel will almost certainly need to be replaced before it is safe to fire. We did not fire this handgun. As with all used firearms, a thorough cleaning may be necessary to meet your maintenance requirements.

Box, Paperwork & Accessories: None. The gun has some aftermarket parts and some factory parts have been modified. Please see our pictures for a better idea of the modifications made.

Our Assessment: Founded in 1950, Clark Custom Gunsmithing is now owned and operated by its third generation of Clarks. In those 68 years, they have developed a well-earned reputation for some of the best gunsmithing on the planet. This pistol was clearly set up as a bullseye gun with a heavy slide and adjustable sights, wide trigger shoe, and custom fit barrel bushing. It’s unfortunate that the previous owner apparently had some ammunition trouble, but a new barrel fit to the bushing would likely make this pistol shoot like it just got back from Clark. Please see our photos and good luck!