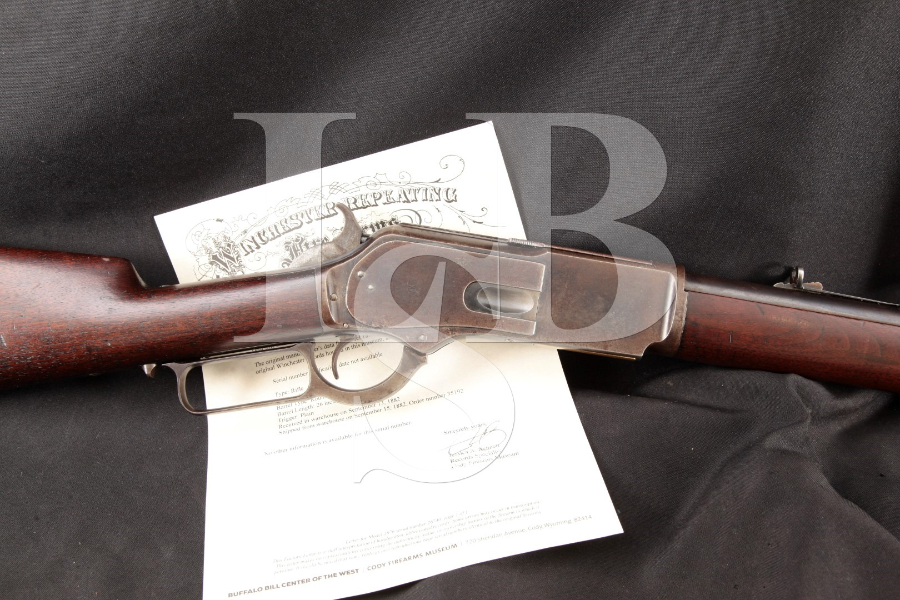 Stock Configuration & Condition: The stocks are two-piece smooth walnut with a lacquered finish that are dark with oil staining. The buttstock has a smooth, straight grip and a blued crescent shaped buttplate with a brass trapdoor in the center or storage of cleaning equipment. The forend has a blued nosecap. The wood to metal fit is excellent and there are no cracks or chips noted. There wood is slightly abraded at the toe, with multiple dings and bruises scattered over the belly and comb, with a long scratch in the belly and a drag line in the comb. There are several dings and drag lines with a few scrapes in the finish in the sides of the buttstock and in the forend, with multiple light handling marks scattered over the surfaces. The LOP measures 13 1/8” from the front of the trigger to the back of the buttplate. The buttplate shows finish loss with a plum colored patina developing, with light wear at the heel and toe. The buttplate is in about Very Good condition. The stocks are in about Very Good overall condition.

Type of Finish: The rifle is blued.  We think the hammer, trigger and lever were case colored.

Bore Condition: The bore mostly bright, tending to gray at the muzzle. The rifling shows light wear. There is light erosion in the bore from the muzzle back several inches with a few small spots of moderate erosion about 3” from the muzzle.

Overall Condition: This rifle retains about 40% of its metal finish. The barrel, magazine tube, forend nosecap and tangs show mainly finish loss with a dark colored patina formed. The receiver has a somewhat mottled finish with traces of bluing interspersed with plum colored patina. There are scattered spots of light pitting and dark spots of erosion in the barrel and the upper surface of the lever with light pinprick surface erosion scattered over the receiver and its sideplates. There are several light scratches in the patina of the barrel and magazine tube, with slightly deeper scratches in the receiver and its sideplates. The hammer checkering shows very light wear. The screw heads are mostly sharp, with a few light marks from a screwdriver. The markings are clear. Overall, this rifle rates in about Very Good condition.

Mechanics: The action functions correctly. The hammer has a half-cock safety and the lever safety is operational. We have not fired this rifle. It has a smooth dust cover on the receiver that slides on a rail integral to the top of the receiver, typical of the 3rd Models. As with all used firearms, a thorough cleaning may be necessary to meet your maintenance standards.

Box, Paperwork & Accessories: This rifle comes with a letter from the Cody Museum stating that this rifle was shipped in Sept. of 1882 with a 26” round barrel.

Our Assessment: Per Wikipedia: “The Winchester Model 1876 was a heavier-framed rifle than the Model 1873, and was the first to be chambered for full-powered centerfire rifle cartridges, as opposed to rimfire cartridges or handgun-sized centerfire rounds. While similar in design to the 1873, the 1876 was actually based on the prototype 1868 lever-action rifle that was never commercially produced by Winchester. It was introduced to celebrate the American Centennial, and earned a reputation as a durable and powerful hunting rifle that was also used by the Canadian North-West Mounted Police and the Texas Rangers. Theodore Roosevelt used one on his early hunting expeditions in the West and one was found in the possession of Apache warrior Geronimo after his surrender in 1886.”. Unfortunately, the 1876 lost popularity when the Model 1886 was introduced in heavier calibers. This rifle is chambered in .45-60 Win., a cartridge designed for the short action Model 1876 rifle by shorting the .45-70 Govt. The cartridge is capable of pushing a 300 grain lead bullet to 1390 fps., and while it may not offer a flat trajectory, it has enough knock-down power for elk and moose. This is a 3rd Model 1876 rifle that comes with a letter from the Cody Museum that indicates the barrel has been changed sometime in its distant past. There are no markings on the barrel or receiver that indicate this, nor on the left side of the upper tang where they are sometimes stamped, but the barrel is 28”, not 26” as the letter states. This rifle is in about Very Good condition with a fully operational action. The 1876 Winchester was only made for 21 years, with a total of about 63,871 made in rifle, carbine and musket formats, with the result that ALL are collectable, some just more so than others. This rifle has its original metal and wood finishes, and is perfect for the high-end collector who needs a ’76 to put between the ’73 and ’86 that are already in his safe.