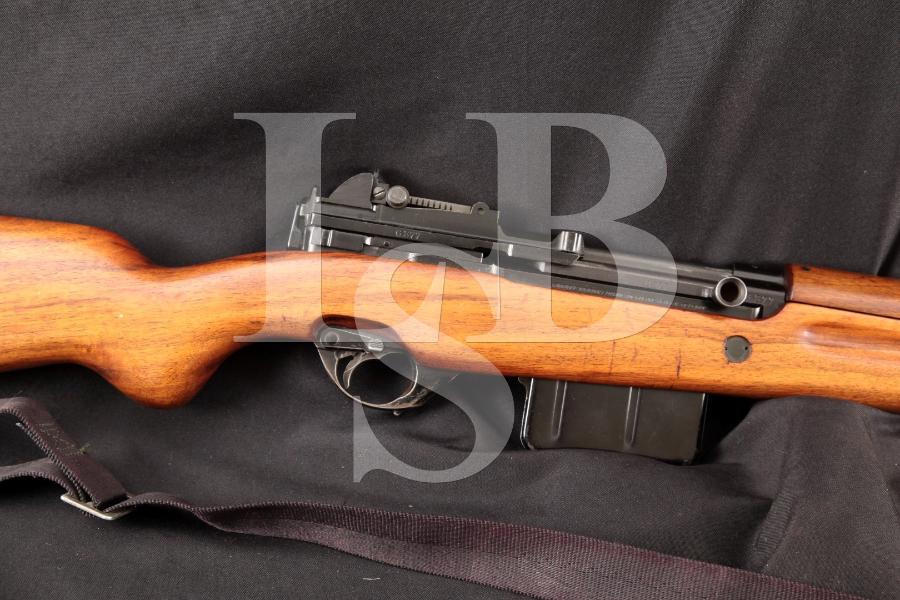 Sights / Optics: The front sight is a dovetail set, bladed post set between two protective ears. The rear sight is an aperture tangent sight marked from “1-10”.

Stock Configuration & Condition: The two piece gloss finished hardwood stock has a pistol grip, finger grooves, metal nosecaps, barrel band, two sling swivels and a metal buttplate with hinged door for storage in the butt. The butt has two drilled circular holes for cleaning gear under the buttplate door. The holes are approximately 1 inch wide. The buttplate shows scrapes, scratches & thinning. The wood shows deep scratches under the right side of the receiver. The wood shows several other small or thin scrapes & scratches. The LOP measures 13 1/4 inches from the front of the trigger to the back of the buttplate. The stock rates in about Very Good Plus overall condition.

Bore Condition: The bore is bright and the rifling is deep. There is no erosion. The bore shows an M.E. of -1 (negative 1).

Our Assessment: This rare Luxembourg contract FN 49 was made sometime during in the early 1950’s by Fabrique Nationale of Belgium. Luxembourg purchased a total of 6,003 FN 49 rifles. This one has the large “AL” marking on the top of the receiver that identifies the rifle as a Luxembourg contract FN 49. It is chambered in .30-06 Springfield and has a strong bright bore. It will be putting .30-06 ammo down range long after you are gone…if properly cared for.

Some basics from Wikipedia: “The Fabrique Nationale Model 1949 (often referred to as the FN-49 or SAFN) is a semi-automatic rifle designed by Dieudonné Saive and manufactured by Fabrique Nationale. It was used by the militaries of Argentina, Belgium, the Belgian Congo, Brazil, Colombia, Egypt, Indonesia, Luxembourg, and Venezuela. While well regarded for its high build quality and reliability in comparison to the rifles of the time, its marketability was limited, as it was not developed in time for use in World War II but later, as many militaries had already begun the switch to selective fire assault rifles. As a result, it found itself in direct competition with a number of more modern rifles such as the Heckler & Koch G3 and Fabrique Nationale de Herstal’s own FN FAL, resulting in limited sales.”