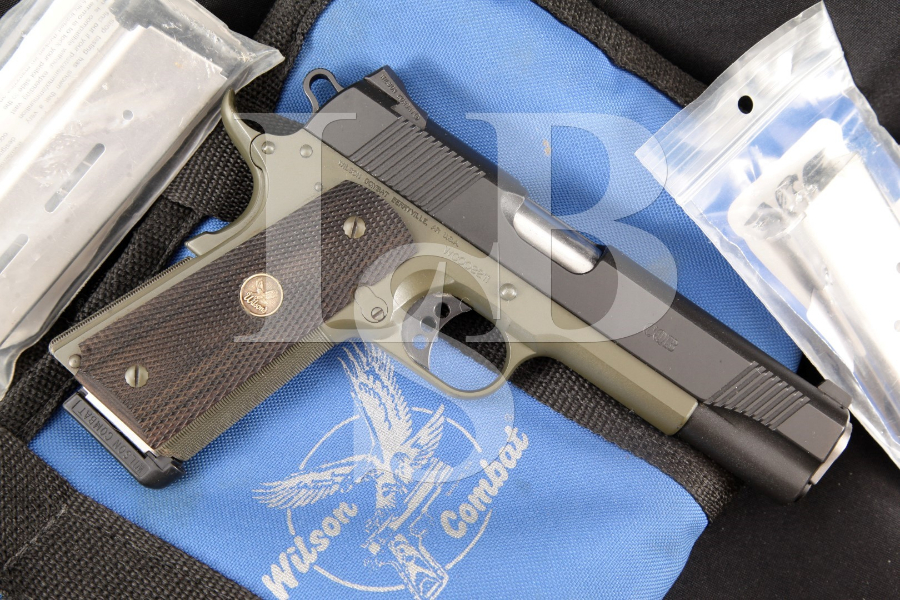 Year of Manufacture: 2003 (Per Wilson Combat)

Sights / Optics: The sights are Wilson Combat branded Trijicon type night sights. The rear lamps have dimmed / died. The front lamp is useable in very low light, but also has dimmed. Both are dovetailed into the slide.

Stock Configuration & Condition: The grips are laminate wood checkered with Wilson Combat medallions. The grip checkering has softened some from handling, but most checkering is still sharp. There are no deep gouges or bruising. No chips or cracks to the stocks. The grips rate in about Excellent overall condition.

Bore Condition: The bore is Bright and the rifling is Sharp. There is No erosion in the bore.

Overall Condition: This handgun retains about 98% of its metal finish. There is a light mark below the slide stop as from re-assembly. This mark does not go through the finish. There is a light scuff in front of the front slide serration on the left as well as a light scuff above and to the rear of the “Wilson Combat” marking on the left. The screw heads are Sharp. The front and back stippling is sharp. Front and rear slide serrations are sharp. The markings are Clear. Overall, this handgun rates in about Fine condition.

Mechanics: The action functions correctly with no play between slide and frame at the rear. The barrel has no play when in battery. Trigger is very crisp. We did not fire this handgun.

Our Assessment: Wilson Combat has long been known as one of the best manufacturers of custom and semi-custom 1911s in the world. This pistol is an excellent example of why they have earned this reputation. Wilson has combined the most desired upgrades including front and rear slide serrations, front and back strap stippling, flat mainspring housing, extended beavertail grip safety, and skeletonized hammer and trigger with their legendary craftsmanship quality. Quality that will make this an excellent target pistol as well as a defensive pistol to which you can trust your life.