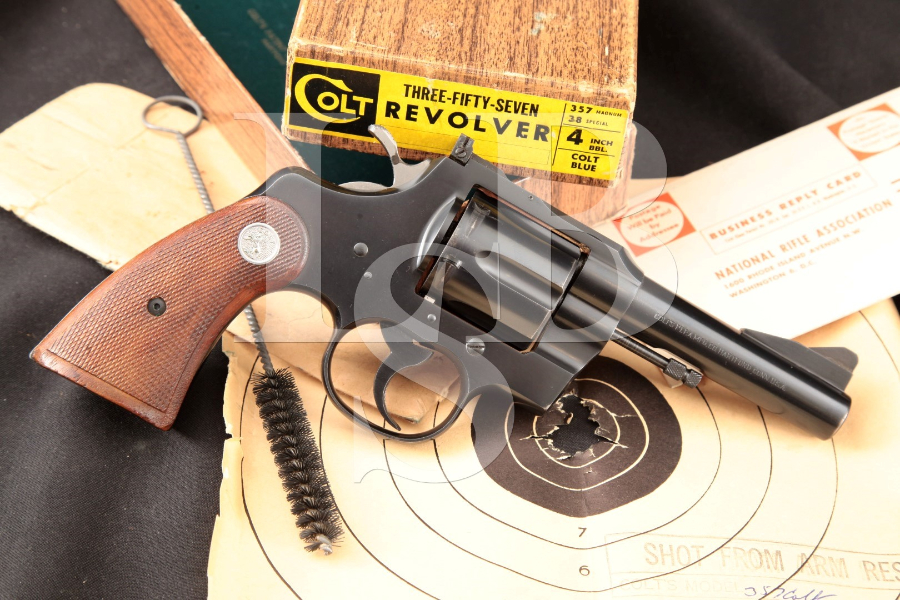 Barrel Length: The barrel is 4”.

Sights / Optics: This revolver is mounted with a square notched flat topped rear sight adjustable for windage and elevation and pinned into the top strap. The front sight is a serrated ramp fixed to a serrated ramped base on the barrel. The top strap has a matte finish to reduce glare.

Bore Condition: The bore is bright and the rifling is sharp. There is a little lead fouling in one of the grooves near the muzzle, but no erosion.

Overall Condition: This revolver retains about 98% of its finish. There is thinning on the front edges of the barrel and cylinder, and the front corners of the frame. There are a few light handling marks in the cylinder, but the cylinder does not have a drag line. The hammer and ejector rod knurling and the backstrap serrations are sharp. The screw heads are sharp. The markings are clear. Overall, this gun rates in about Excellent condition.

Mechanics: The lock-up on this revolver is SOLID on all 6 chambers. The trigger is very smooth in double action, and crisp and light in single action. The action functions correctly. This revolver has a standard width hammer and trigger. We have not fired this revolver. As with all used firearms, a thorough cleaning may be necessary to meet your maintenance requirements.

Box, Paperwork & Accessories: This revolver comes with its factory box, test target, warranty card and cleaning brush. The box is cardboard with an imitation brown wood covering, marked on the lid with “COLT” in gold lettering. One end panel has a label correctly marked with the make, model, barrel length and finish of this revolver. The serial number of this revolver is written with a black marking pen on the bottom of the box. The inside of the box is dark green with a large Rampant Colt logo in the underside of the lid and a Colt address in the bottom of the box. The outside of the box shows fraying at the corners and several handling marks. The inside shows abrasions from the sights and hammer. The box is in about Very Good to Fine condition. The test target is for 5 shots fired at 15 yards from an arm rest, and measures about 0.55” center-center. The target includes the serial number of this revolver and is signed by the factory technician. The cleaning brush is black nylon with a wire handle, and appears unused.

Our Assessment: In the early 1950’s, Colt realized that they were behind the times and didn’t have a revolver chambered for the .357 Magnum. The previous New Service model had been discontinued during WWII, and was a heavy frame, too heavy for constant carry use. Colt brushed off their medium E frame, changed it to add an internal spring-loaded firing pin and heat treated it to increase its strength, calling its new creation the “I” frame. The new gun was ready for production in 1953 and Colt called it “The Colt 357”. Colt outfitted the revolver with adjustable sights and gave it a more carefully fitted and tuned action. Colt used the old E frame for the Trooper, and gave it adjustable sights as well, chambered for .38 Special and .22 L.R. The Colt .357 was a big success, but then Colt came out with the Python, an even more upgraded revolver. Shooters who had the money went to the new Python and those who didn’t mostly bought the Trooper, leaving the Colt .357 in limbo. It was discontinued in 1961 after only 15,000 had been produced, at which time Colt moved the Trooper to the I frame and offered it in .357 Magnum as well as .38 and .22. This Colt .357 was made nearly at the end of its production life, in 1960. It has the desirable Colt Blue finish, with a very smooth double action trigger. It comes with its factory box, warranty card, test target and a bore brush. This revolver doesn’t look like it was shot very much, and spent most of its life inside its box. We think the Colt collectors will be interested, especially given the small numbers of this model produced. You are not going to find one in better condition with its box unless you are prepared to wait years while you are looking.