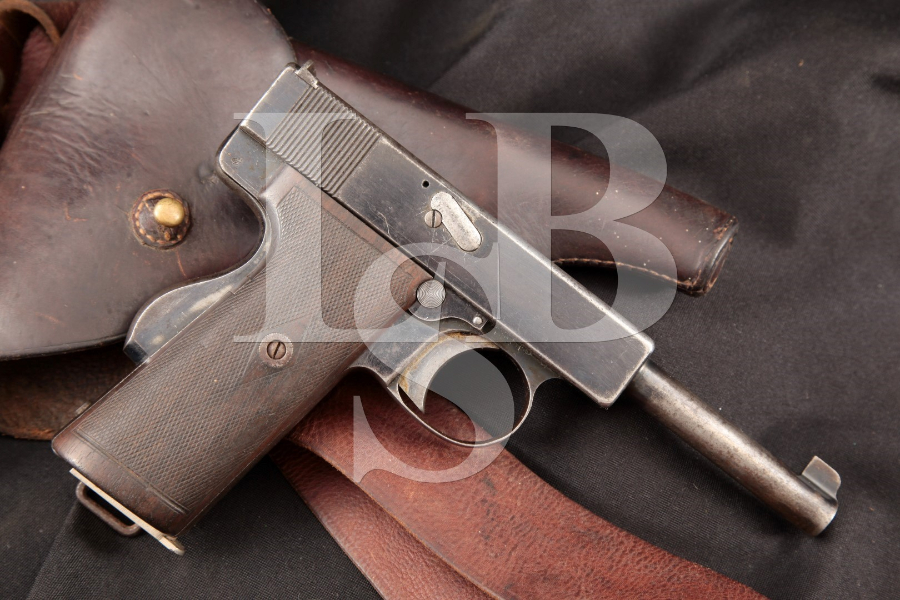 Year of Manufacture: February 1911 (There were only about 930 pistols manufactured between three different types over a period of three years, but there were only 22 pistols made the first two years, so production centered on 1911.)

Markings: The left side of the slide is marked with W&S “Winged Bullet” logo, “WEBLEY & SCOTT LTD / LONDON & BIRMINGHAM / ’38 AUTOMATIC PISTOL” and “WALTER LOCKE & CO  LTD CALCUTTA & LAHORE”. The left rear of the frame is marked “55969”. The inside surfaces of the grip panels are marked “969”. The flat top of the barrel is marked with a Crowned “BP” proof mark and a Crowned “BV” view mark, and the top of the slide just behind the barrel and the right rear of the frame are marked with a Crowned “BV” view mark. The left side of the grip safety is marked “69”.

Sights / Optics: The front sight is a post style blade, fixed to the top of the barrel. The rear sight is flat topped square notch dovetailed into the top rear of the slide and secured with a set screw.

Stock Configuration & Condition: The grips are checkered walnut with a smooth diamond shape around the grip screw in the center of the grip. There are a few small dings in the smooth borders of the grips. The checkering shows moderate to heavy wear with two bruises in the bottom half of the left grip. The checkering below and in front of the grip screw in the right grip is worn nearly smooth. The grips rate in about Very Good overall condition.

Overall Condition: This handgun retains about 50% of its metal finish. There are tiny spots of solid erosion scattered over the surfaces with pitting on the edges of the front strap and backstrap. There is finish loss on the barrel and the edges of the slide and frame, with thinning on the remainder. There is a dark plum colored patina developing on the front strap, backstrap and grip safety. There are several scratches scattered over the sides of the slide, frame and grip safety, with tool marks around the large pin on the left side of the slide. The grip screws are sharp but the screw at the back of the slide is disfigured. The markings are clear. Overall, this handgun rates in about Very Good condition.

Our Assessment: The Model 1910 .38 Military Model was based on the M1908 .32 pistol. Their small caliber pistols had been very successful, and they wished to attract military contracts for a larger caliber pistol. They chose the .38 ACP, as it had been used successfully by Colt in their M1900 and M1902 pistols. Only about 22 pistols were made in 1909 and 1910, with the production ending in Dec.1911 after 930 pistols had been produced. (From pg. 192 of “Webley & Scott Automatic Pistols” by Gordon Bruce). As of Feb. 1911, when this pistol was made, the design was still evolving. Pistols made before March 1911 were Type 1, Type 2 pistols were produced between March and September, and the last were made as a Type 3. Although the pistols functioned properly and had better penetration than most of the revolver in use on the continent, there wasn’t much interest for one reason or another, not the least of which was a rather high cost by British standards. The M1910 was not made during WWI, and following the war there were still a few unsold from those made in 1911. This Type 1 pistol is marked with the name “Walter Locke & Co.” of India, so it is clear it was meant for commercial sales, perhaps to British personages requiring self-protection. From what we can tell, there were only about 55 Type 1 pistols manufactured, making this an extremely rare pistol. To complete the package for the collector, it comes with a leather flap holster and shoulder strap. We expect all collectors of British Military Arms and of Webley and Scott pistols to be interested in this pistol.