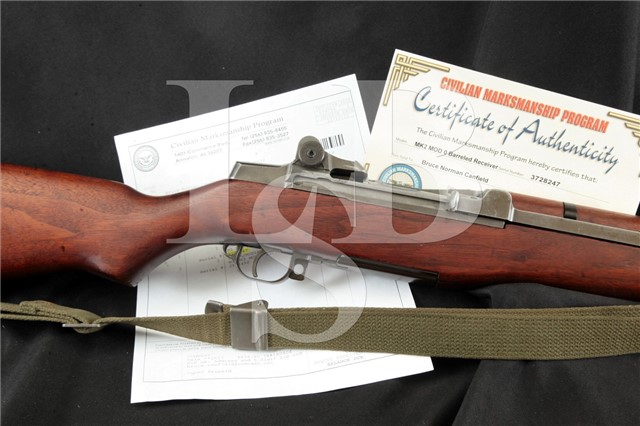 Markings: There is no visible import mark.

Stock Configuration & Condition: The three piece hardwood stock has a pistol grip, metal nose caps, a stacking loop, two sling loops and a metal buttplate with hinged door for storage in the butt. The refinished buttplate has small scratches & pin prick surface erosion showing through the finish. The main body of the stock shows scrapes, scratches & compression marks that have been oiled over. The most prominent are under the left side of the receiver. Some are deep and have removed small portions of surface wood. The LOP measures 13 1/4 inches from the front of the trigger to the back of the buttplate. The stock rates in about Very Good Plus to Fine overall condition.

Bore Condition: The bore is mostly bright. It is semi bright near the muzzle. The rifling is deep. There is no erosion. The bore shows an M.E. of 2.

Overall Condition: This rifle retains about 96% of its metal finish. The barrel shows a few small scrapes & scratches. The bottom metal shows a few light scrapes. The op rod shows a few scrapes. The receiver shows thinning on the leading edges of the metal as well as some discoloration. The right side of the receiver shows thinning consistent with cycling. The screw heads are intact. The markings are deep. Overall, this rifle rates in about Very Good Plus to Fine condition.

Box, Paperwork & Accessories: This rifle was built from an M1 Garand MK2 MOD 0 barreled receiver purchased by Bruce Canfield in Dec. of 2012. The rifle comes with a Civilian Marksmanship Program (CMP) Certificate of Authenticity marked with the rifle’s serial number, Mr. Canfield’s named and “MK2 MOD 0 Barreled Receiver”. A copy of the sales invoice from the CMP is also included. It lists this rifle’s serial number, M1 MK2 MOD 0 Barreled Receiver”, information about another M1 purchased and other shipping information. The paperwork & Certificate are in about Excellent condition.

Our Assessment: This Springfield Armory M1 Garand rifle was originally made back in 1945. Its barreled receiver was converted to a 7.62mm NATO chambered M1 MK2 MOD 0 between 1962 and 1965. The conversions were done as a Navy contract by Harrington & Richardson Arms. The M1 Garand Mk2 MOD 0 barreled receiver was purchased from Civilian Marksmanship Program (CMP) by Bruce Canfield in Dec. of 2012. This rifle was built from the M1 MK2 MOD 0 purchased from the CMP while Mr. Canfield owned it. Bruce Canfield is an internationally recognized weapons historian. He has written 12 books on military weaponry including books that cover the M1 Garand. He is a true collector. This is a rare M1 Garand with rare markings that will add nicely to your collection.