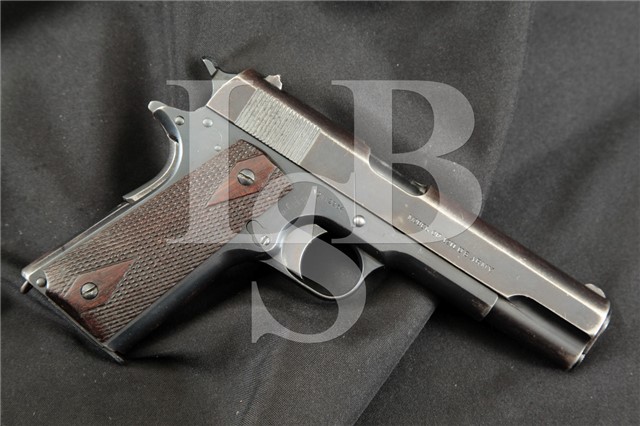 SOLD FOR: $1,450.00
LSB#: 180110JT10
Make: Colt
Model: 1911
Serial Number: 112234
Year of Manufacture: April 12, 1915 (Clawson)
Caliber: .45 ACP
Action Type: Single Action Semi-Auto with Removable Magazine
Markings: The right side of the frame is marked “NO 112234” and is also stamped “LINN” in two places. The right side of the slide is marked “MODEL OF 1911. U. S. ARMY”. The left side of the slide is marked “PATENTED APR.20.1897 / SEPT.9.1902 DEC.19.1905. FEB.14.1911”, “COLT’S PT. F.A. MFG. CO. / HARTFORD, CT. U.S.A.”, and at the rear with a Rampant Colt logo. The left side of the frame is marked “UNITED STATES PROPERTY” at the front and behind the trigger with a circled “GHS” (Col. Gilbert H. Stewart, S&W and Colt M1917 Revolvers, Colt M1911 and M1911A1 Pistols 1915-1919). The top of the barrel at the chamber is marked vertically with “P” and “H”, indicating the barrel was made by Colt between serial numbers 60,000 and 375,000. The flat on the bottom of the slide is marked with an arrowhead inspection mark, and the rear face of the slide above the firing pin retainer is marked “H”. The flat on the top of the frame in front of the hammer is marked “H” and “R”, and the right rail is marked with a diamond inspection mark. There is another mark in the “U” channel just in front of the magazine well that looks like a “U” with square corners.
Barrel Length: 5”
Sights / Optics: The pistol is mounted with a “U” notched rear sight dovetailed into the slide and a short rounded blade front sight fixed to the slide.
Stock Configuration & Condition: The grips are checkered walnut with smooth diamonds around the grip screws. The grips are dark with oil staining. There is a bruise, a tool mark and a ding in the diamonds on the left grip and light handling marks and two tiny surface chips in the smooth diamonds of the right grip. The checkering shows light to moderate wear tending to heavy wear at the bottom edges of the grips. The grips rate in about Fine overall condition.
Type of Finish: The finish is blued. The mainspring housing is smooth.
Finish Originality: The finish appears to have been refinished in the distant past. (The LINN marking on the frame was done after it was refinished, and could be the mark of a county police department or ?) .
Bore Condition: The bore is a mottled bright/gray with sharp rifling. There are spots of microscopic erosion scattered throughout the bore.
Overall Condition: This pistol retains about 80% of its current metal finish. There is light pitting at the left front edge of the slide and pinprick surface erosion under the finish on the top of the slide and under the finish of the mainspring housing. There is surface loss on the front edges of the slide and frame, and thinning on the remaining edges. There is also surface loss on the grip safety and at the bottom of the mainspring housing. There are a few small dings on the right bottom edge of the slide and a few more on the front strap. There are light handling marks scattered over the slide and frame. The knurling on the small parts shows light wear and the slide serrations are sharp but with several tiny dings in the edges on the right side. Three of the screw heads are disfigured. The markings are clear, and the “LINN” mark on the frame behind the trigger is crisp. Overall, this pistol rates in about Very Good condition as refinished.
Mechanics: The action functions correctly. It has both a manual and grip safety and the trigger pull is crisp. The slide is tight to the frame. We did not fire this pistol. As with all used firearms, a thorough cleaning may be necessary to meet your maintenance standards.
Box, Paperwork & Accessories: This pistol comes with single blued 7 round magazine with a flat floorplate (no lanyard ring). The magazine appears to have been refinished and light pitting under its finish. The magazine is in about Very Good overall condition.
Our Assessment: The 1911 and 1911-A1 pistols served the military of the United States from 1911 to 1985, through two World Wars and the Korean and Vietnam wars. They gained a reputation as a reliable handgun with plenty of stopping power, and are held in high regard by those who have used them. This is a U. S. Government marked Colt 1911 pistol made during WWI in 1915. The pistol has been refinished and the magazine is from a different era, but the markings on the pistol and barrel are correct for a pistol of that era. The only disconcerting mark is on the right side of the frame: LINN in two places, which could be a city or county, as there are several in the United States. The mark was made after the pistol was refinished, sometime in the distant past. The bore is bright with sharp rifling and the slide is tight to the frame. This pistol should be of interest to Colt collectors and collectors of WWI weapons as well as to shooters. This pistol would be great for home protection or for shooting in the Traditional category at SASS Wild Bunch matches, but WWI Colts are very collectable, and the shooters may not outbid the collectors on this one.
CA Legal or CA Private Party Transferable: This C&R eligible handgun CAN be transferred as a dealer sale in California and CAN be sold as a Private Party Transfer (PPT) at our Simi Valley shop. All cartridge firing handguns (even C&R’s and antiques) sold to a California resident must be DROS’d. This does not apply to out of state residents.