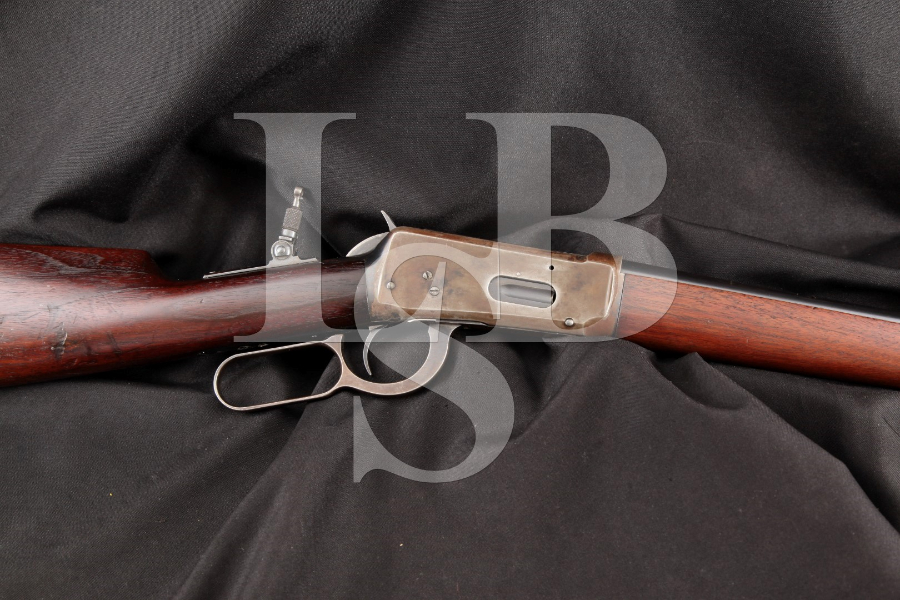 Action Type: This rifle has a lever action with a 2/3 length tubular magazine.

Markings: The left side of the barrel is marked “MANUFACTURED BY THE WINCHESTER REPEATING ARMS CO. / NEW HAVEN, CONN. U.S.A. PATENTED AUGUST 21, 1894.”, “NICKEL STEEL BARREL / ESPECIALLY FOR SMOKELESS POWDER” and “25-35 W.C.F.”. The top of the barrel at the receiver and the receiver’s chamber ring are marked with a circled “WP” proof. The underside of the receiver is marked “850222” and the bottom of the lower tang just in front of the trigger is marked “32”.

Barrel Length: The barrel is 20” in length.

Sights / Optics: The rear sight dovetail is empty. The front sight is a brass beaded blade pinned into a slotted rectangular base fixed to the barrel just behind the forward barrel band. The upper tang is mounted with a Lyman No. 1A combination aperture sight. The base of the sight is marked “LYMAN / MIDDLEFIELD / CONN. U.S.A.”. The sight has a lever on its left side for locking it into the upright position and has a tiny aperture that folds down, revealing a larger aperture. The small aperture is for use on distant targets and while target shooting, while the large aperture is for use on close targets and running game.

Stock Configuration & Condition: The stocks are 2-piece walnut with a lacquered finish, a smooth straight grip, and a blued steel crescent shaped buttplate. The forend is held with a single barrel band. The buttstock is noticeably darker than the forend, and has obviously been refinished. The forend shows a deep bruise and several deep dings on its left side, a sharp ding behind the barrel band on the right, and several lighter marks. The buttstock shows a long flat area on the right side of the wrist and another spot near the belly where the wood was sanded unevenly. There are several deep bruises on the right side of the buttstock, with several dings and draglines scattered over the rest of the buttstock. There are spots of paint transfer on both sides of the butt, a tiny surface chip at the right side of the buttstock tang, and abrasions at the toe. The LOP measures 13” from the front of the trigger to the back of the buttplate, which fits the wood well. The buttplate shows surface loss with light wear at the heel and toe and several tiny dings in the remainder. The buttplate is in Very Good condition. The stocks are in about Good condition.

Bore Condition: The bore is bright and the rifling shows moderate wear. There is no erosion in the bore.

Overall Condition: This rifle retains about 60% of its metal finish. The barrel band, the front of the magazine tube, the link and the receiver all show surface loss with a dark plum colored patina showing. There is also surface loss at the front edge of the barrel and on the lever. There is a tiny ding on each side of the magazine tube and a scratch through the finish on its left side, and several light handling marks and a few tiny dings in the barrel. The receiver shows tool marks around the screw heads, a light mark from rubbing on the saddle ring, tiny nicks around the top front edge of the port, and a few light marks on its sides. The lower tang shows tool marks around the screw heads, a spot of surface loss from rubbing on the lever and a few tiny dings. The screw heads are disfigured and the markings are crisp. The hammer knurling shows moderate wear. Overall, this rifle rates in about Very Good condition.

Mechanics: The action functions correctly. The hammer has a half-cock safety. The rifle is equipped with a lever safety, which is operational. The lever lock-up is tight and the trigger is crisp. We did not fire this rifle. As with all used firearms, a thorough cleaning may be necessary to meet your maintenance standards.

Box, Paperwork & Accessories: The saddle ring is present on the left side of the receiver.

Our Assessment: This is a Winchester Model 1894 Saddle Ring Carbine in .25-35 Win. that was made in 1913. The .25-35 Win. cartridge was based on a necked-down 30-30 Win. and when it was first introduced in 1895, it was intended for varmints and deer. Today, the cartridge is considered a little light for deer, but it is adequate in its heavier loading if the range is kept under 200 yards, but its best use would be for predators such as coyotes. This carbine is in Very Good condition with a bright bore that shows no erosion. With it’s original finish and pre-WWI manufacture date, this rifle will be of interest to the Winchester collectors.