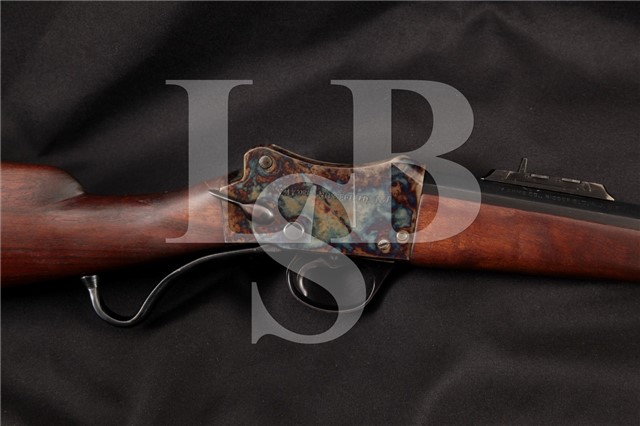 Barrel Length: The heavy target barrel is a part, round, part octagonal, 26” in length and is 0.892” in diameter at the muzzle.

Sights / Optics: There is a globe front sight base that is dovetailed onto a matted ramp base, fixed to the barrel. The globe allows interchangeable inserts, the insert installed is a clear yellow doughnut, with a beaded pin. NO ADDITIONAL SIGHT INSERTS The rear sight is a standing “V” express blade, marked for 100 yard usage, along with a 200 and 300 yard flip-up “V” leaf system, dovetailed onto a stepped base, fixed to the barrel.

Stock Configuration & Condition: The stocks are dark stained hardwood with a smooth matte finish. Both stocks have light scuffs, the top of the buttstock wrist has two holes drilled and a crack that has nearly reached all the way through the wood, please see our pictures. The LOP is 14 3/8” from the front of the trigger to the back of the Beretta marked black rubber recoil pad; the pad is in Excellent condition as not original to the rifle and has a nice fit to the wood. The forend is in Excellent condition, the buttstock is in Good condition.

Overall Condition: This rifle retains about 98% of its current metal finish. Only a few areas of scuffing occur on the barrel and receiver. The rear right in the octagonal portion of the barrel has some odd factory polishing blemishes under the finish, this is also seen on the receiver and more notably on the lever, this said, the construction is RIGID, the case coloring is bright and the bluing is deep. The screw heads are sharp. The markings are deep and defined. Overall, this rifle rates in about Fine condition and would rate much higher but for the buttstock.

Mechanics: The action functions correctly. The rifle is based on the Peabody model, improved by Friedrich von Martini, with a right side receiver mounted thumb safety that must be pushed before a shot is taken, helping with accidental discharges. We did not fire this rifle. As with all used firearms, a thorough cleaning may be necessary to meet your maintenance standards.

Our Assessment: This type of rifle and cartridge was most famously employed by British forces during the Anglo-Zulu War of 1879—which included the Battle of Isandlwana and the Battle of Rorke’s Drift—as well as during the Sudanese Campaign of 1884–1898, and in various other colonial conflicts in Africa and India. By the end of the 19th century, the .577/450 Martini–Henry cartridge was considered obsolete, though it was still in military production as late as World War I (for use by Royal Flying Corps observers and Zeppelin-buster aircrews, using an incendiary spitzer bullet), and in commercial production by Kynoch until the late 1950s. The load used has been used to hunt virtually every possible species of big game including deer, plains game, tiger, and even elephant. When shown this cartridge, one’s automatic reaction is usually priceless, it is certainly something to behold. In the 1970’s, Navy Arms commissioned W.W. Greener to make the acclaimed Martini-Henry again and it has been highly regarded as a brute for falling block firearms. This rifle is in about Fine condition with a strong bore and tight mechanics. It does not look to have seen much use, the recoil pad should help in case one is brave enough to shoulder such a round.