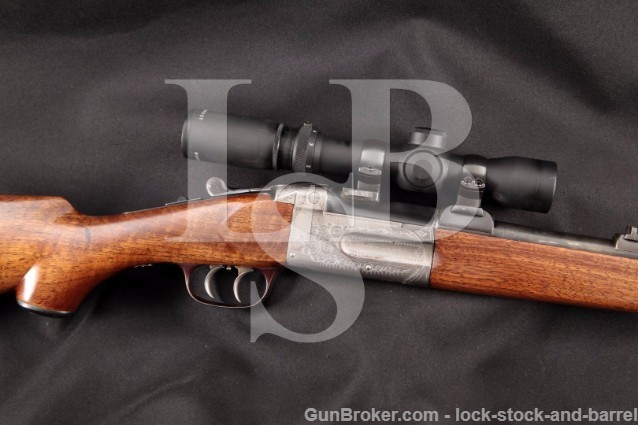 Make: The rifle was made in Birmingham England on a Remo in Suhl German receiver.

Year of Manufacture: The underside of the barrel is marked “12’26”, which we take to be the date of manufacture.

Caliber: The chamber was re-bored for .25-35 Ackley Improved Winchester.

Sights / Optics: The front sight is a steel beaded blade, slotted fore to aft into a matte finished ramp base, fixed to the barrel. The rear sight consists of a standing “U” notched base with one matte finished “U” notched leaf, dovetailed to a base that is fixed to the barrel. The breech area has a two-piece QD hook ring and base set with fine matting, the rings are holding a Burris 2-7x Compact duplex reticle scope. The scope has a few minor handling marks and rubbing at the edges, the objectives are free of visible damages. The scope and rings are in Fine condition.

Stock Configuration & Condition: The rifle has a two-piece smooth walnut set that was professionally restored at some point, evident by mild rounding before meeting the metal. The tall, slender forend has a black nose cap, the wood has a few minor handling marks. The buttstock has a black-capped pistol grip and left side cheek piece. A sling swivel is installed on the belly with the forward stud on the barrel. The buttstock has a few light dings but no cracks or major damages. The LOP measures 13 1/2” from the front of the trigger and 14 1/4″ from the front of the forward trigger to the back of the Remo brand polished horn butt plate; the plate has a nice fit to the stock, it shows mild wear and cleaning marks, in Fine condition. The stocks rate in about Fine overall condition.

Finish Originality: The rifle was professionally restored / might be original from the time of the build in England, the trigger guard has touch up cold bluing.

Bore Condition: The bore is light gray, the rifling is highly defined. There are spots of mild pitting scattered the length of the bore.

Overall Condition: The barrel has hand rubbing exposing darkening patina and spots of light erosion. Pitting can be seen under the finish, the nickel receiver has nice retention of its plating with a shift to dull luster from age. The trigger guard has a purple tone and smells of cold blue. The metal to metal fit and scroll engraving were retained well. The screw head slots range from sharp to moderately tooled. The markings are clear. Overall, this rifle rates in about Very Good Plus to Fine condition.

Mechanics: The action functions correctly. The rifle has a tang mounted safety, double set triggers, and boxlock action. The rear trigger sets the front trigger, which will break at about 2 3/4lbs. There is no play in the construction. We have not fired this rifle. As with all previously owned firearms, a thorough cleaning may be necessary to meet your maintenance standards.

Our Assessment: The receiver was manufactured by Remo in Germany. The rifle was later finished in England where it was proofed. This rifle has been re-bored for .25-35 Ackley Improved, a wildcat cartridge based on the Winchester .30-30 case and .25 caliber projectile, which would have been more than enough to burn through most medium game. The stocks are elegant and the engraving is something to marvel at.