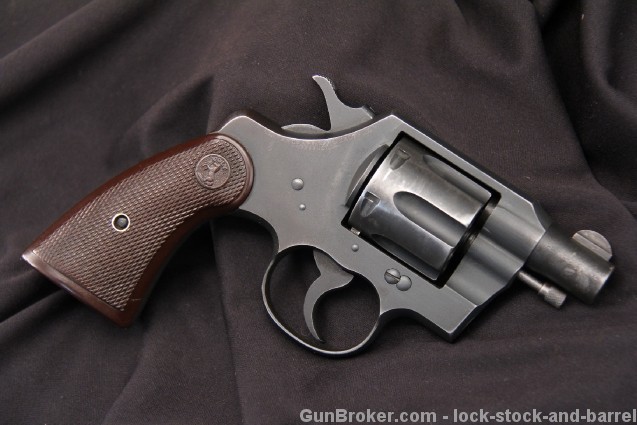 Sights / Optics: This revolver is mounted with a fixed blade front sight, and a trough in the frame rear sight.

Stock Configuration & Condition: The grips are checkered plastic with Colt logos. The checkering is still sharp. There are just a few compression marks on the grip panels. There are no chips cracks or losses. The grips rate in about Excellent overall condition.

Bore Condition: The bore is bright and the rifling is sharp and deep. There is minor erosion/fouling in the flats. This is a good shootable bore.

Overall Condition: This revolver retains about 80% of its metal finish. The high edges of the frame at the barrel, hinge , topstrap and trigger guard show wear, likely from holster use. The cylinder shows wear and thinning, also consistent with holster wear. There is a dragline present . The Screw heads are sharp and not disfigured. The markings are clear. Overall, this revolver rates in about Very Good – Fine condition.

Mechanics: The action functions correctly both single and double action. The lockup is tight. We did not fire this revolver.

Our Assessment: coolgunsite.com: “Approximately 50,000 Colt Commando revolvers were purchased by the government during World War II, Colt manufactured these revolvers from 1942-45 and they were used by several government organizations to include the military, defense plant guards, police departments and various governmental security personnel. The Defense Supplies Corporation (DSC) began purchasing firearms for authorized purchasers in October of 1941, in 1942 the Army Ordnance Department took over the responsibility of ordering future revolvers from Colt on the DSC’s behalf. Colt manufactured 2 and 4 inch versions of the Commando with the 2 inch version (AKA-Junior Commando) only being thought to number around 3,000 and valued at 2x the four inch version by collectorrs”.

Our research shows a “Clarence J. Lefty Gerstner” born 1914, died 1994 buried in North Dakota. We cannot find a war record for Mr. Gerstner though he certainly warrants further research. From manatarmsbooks.com “This revolver gave a very good performance and was distributed through Defense Supplies Corporation to police officers, factory guards and other nonmilitary personnel. Military use of this model was not extensive.”. This is a good condition totally functional, collectable revolver. This revolver is still a good choice for concealed car and home defense carry.