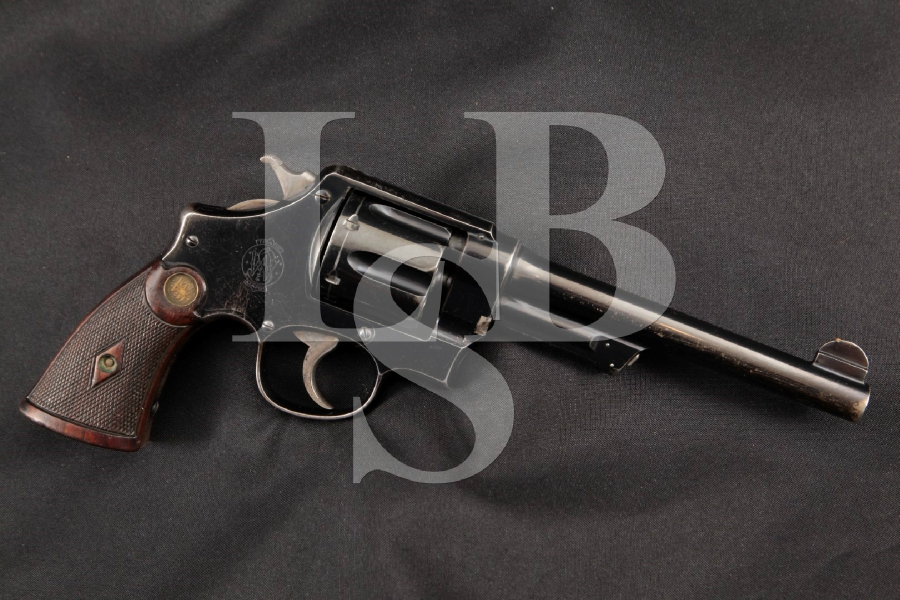 Barrel Length: The pinned barrel is 6 ½” in length and has an underlug that protects the ejector rod.

Sights / Optics: The front sight is a rounded blade atop a rectangular base fixed to the barrel. A brass bead has been inlet into the rear face of the blade near the top. The rear sight is a “U” shaped groove in the top of the frame.

Stock Configuration & Condition: The grips are checkered walnut with smooth diamonds around the grip screw and brass medallions at the top of the grips. The smooth borders show several small dings. There are also several dings and drag lines in the bottom surfaces of the grips with a divot out of the bottom of the right grip. The checkering shows moderate wear with a mar in the upper half of the left grip. The grips are in about Very Good overall condition.

Type of Finish: The revolver is blued.

Bore Condition: The bore is a mottled bright and gray with light wear in the rifling. There is light erosion in the bore from the muzzle back about one inch.

Overall Condition: This handgun retains about 75% of its metal finish. There is thinning and pinprick surface erosion on the front strap and backstrap. There is surface loss from holster wear at the muzzle, the front edges of the cylinder, frame and ejector rod housing, and the edges of the top strap. There is thinning on the ejector rod, the edges of the trigger guard, the lower edges of the frame, and the remaining edges of the cylinder, which also has a pronounced drag line. There are multiple light handling marks scattered over the barrel, frame and cylinder and a tiny ding in the right side of the top strap. The screw heads are sharp but a few show light marks from a screwdriver. The markings are clear. The hammer checkering shows light wear and ejector rod knurling is sharp. Overall, this handgun rates in about Very Good condition.

Mechanics: The action functions correctly. The crane has a hole in its front face that locks into a spring-loaded pin in the ejector rod housing, forming the “Triple Lock”. The cylinder lock-up very tight with an almost non-perceptible amount of play. The SA trigger breaks crisply. We did not fire this handgun. As with all used firearms, a thorough cleaning may be necessary to meet your maintenance standards.

Our Assessment: This is a Smith and Wesson .44 Hand Ejector First Model, which was also called the Century Model and Triple-Lock. S&W named it the Century Model as it was the company’s first new design of the 20th Century. The Triple Lock nickname came about due to the third locking lug added to the front face of the cylinder crane. This was added because S&W thought it was necessary to lock the cylinder securely due to the added pressures generated by the new .44 Special cartridge. This was proven wrong when the British bought the hand ejector but wanted the lock removed because it was too expensive to machine and were worried that battlefield mud and debris would foul the lock. The lock was dropped on the Hand Ejector 2nd Model and never replaced, although the later magnum models all had underlugs that shrouded the ejector rod. Many, including Elmer Keith, handgun expert and enthusiast, considered the .44 Hand Ejector First Model to be the finest revolver ever made. This revolver is in about Very Good condition with about 75% of its original finish remaining. The bore is a mottled bright/gray with light wear in the rifling. There is light erosion in the bore from the muzzle back about one inch. The cylinder lockup is very tight. This model revolver is normally very collectable as it was an important step in the evolution of revolvers for Smith & Wesson and led directly to the Models 27 and 29, and all their derivatives. We are sure the S&W collectors out there will want to add this to their collection.