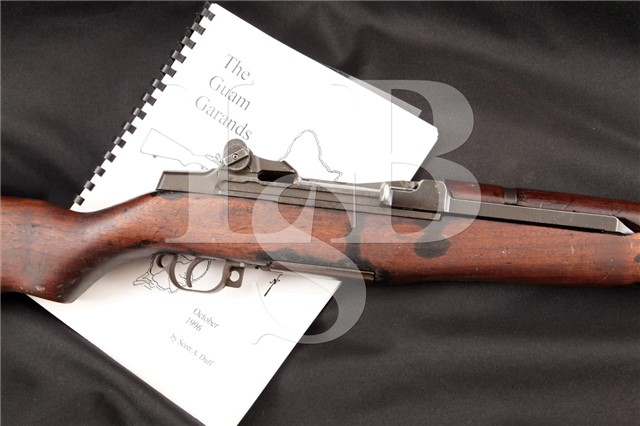 Sights / Optics: The front sight is a blade set between two protective wings. The rear sight is a fully adjustable aperture sight. The windage knob is marked “LEFT arrow” twice. The elevation knob is marked from “2-12” in increments of two as well as “UP arrow DOWN arrow” & “BATTTLE triangle RANGE”.

Stock Configuration & Condition: The bottom of the grip is marked with a faded “circled P” proof. The three piece stock is an oil finished hardwood that has a pistol grip, metal nosecaps, two sling loops and a metal buttplate with hinged metal door for storage in the buttstock. The refinished buttplate shows scratches and surface showing through the new finish. The rear sling loop has white paint on it; the wood shows flecks of paint residue. The wood is discolored around the metal and on the forearm. The left side of the butt shows a partially filled surface repair. The wood shows several scrapes, scratches & compression marks. Many are deep and have removed small portions of surface wood. Most of these marks have been oiled over. The LOP measures 13 1/8 inches from the front of the trigger to the back of the buttplate. The stock rates in about Very Good overall condition as refinished.

Bore Condition: The bore dark. The rifling is well defined. There is erosion present. The bore shows an M.E. of more than 5; our gauge tops out at 5. The throat shows a T.E. of 6.

Overall Condition: This rifle retains about 95+% of its metal finish, as refinished. Imperfections on the metal, such as pin prick surface erosion & a few spots of pitting, show through the new finish. The barrel & gas tube have been refinished black paint. They show scrapes that have removed the paint. The barrel shows a few small spots of light surface erosion. The bolt & right side of the receiver shows some thinning from cycling. The bottom metal shows scrapes. The screw heads are intact. The markings are deep. Overall, this rifle rates in about Very Good condition as refinished.

Box, Paperwork& Accessories: The rifle comes with a booklet titled “THE GUAM GARANDS / October / 1996 / by Scott A. Duff”. It shows some light discoloration on the cover as well as scuffs on the clear cover protector. It is in about Fine condition. The book contains detailed information on the 30 M1 Garands that were authenticated as being used during the Guam campaign.

Our Assessment: This is a RARE M1 Garand that is 1 of 30 Garands authenticated as being used during the Guam Campaign. The booklet that comes with the rifle explains how the rifle got to Guam and how it came back to the US. It also contains detailed information on each “Guam Garand.” It is one of only a few rifles that can be authenticated as being used in a specific military campaign. The rifle has seen better days as it has seen plenty of service. Initially is served the U.S. Military on Guam. it then severed the Local Security Patrol Force of Guam. Later, it was used by the Guam Police Department. In 1994 the Guam Police Force traded its small arms to a U.S. dealer in order to modernize & standardize its small arms inventory. Along the way Scott A. Duff did research on the Guam Garands and compiled a booklet on the rifles. He then offered the rifles for sale to the public. The booklet was offered for sale with the Guam Garands and one is included in this auction. If you do not know, Scott A. Duff is, he has written several books on M1 Garands, M14 rifles and even the AR-15. He is best known for his expertise on M1 Garands. This is a Rare find that will soon belong to a Garand collector.
The following is from the booklet that comes with the rifle:
“It is with great pride that Scott A. Duff offers 30 pieces of authenticated military history: The Guam Garands!
The 30 M1 Garands of the Local Security Patrol Force of Guam give the historian and arms collector a unique opportunity to own a weapon which is linked to a specific World War II campaign. These Garands are the only known group of M1 rifles documented to a World War II battle. Aside from minor parts replacement at field service level, they remain in circa 1944 configuration. As Guam is a United States territory, the rifles bear no “import stamps.” For the collector who appreciates provenance, it doesn’t get any better. The origin of the rifles and who used them may be deduced from research of the battle and its aftermath. During World War II, Springfield Armory shipped M1 rifles in roughly the order of assembly, test firing, and ordnance acceptance. Not in exact serial number sequence, but generally close. The quantities shipped and their destination was at the instruction of the Ordnance Department. Several factors contribute to validation of the theory that the 30 Guam Garands were initially in the hands of the Marine Corps…While a Marine provenance cannot be proven, it is a strong possibility. The odds heavily favor Marine Corps usage, probably 3rd Marine Division. The M1s may have been battlefield recovery weapons. Depending upon which area of operation from which they were recovered, it is also within the realm of possibility that some may have been used by the Army’s 77th Infantry Division.
Several books document that the Local Security Patrol Force of Guam was formed following the battle to join with Marines in sweeps seeking out remaining Japanese soldiers. These Guamanians were armed with U.S. surplus small arms and equipment… Attacks on Marines and Guamanians continued after the surrender of Japan in September 1945. It is highly likely that M1 rifles used by the Local Security Patrol Force were transferred to the new Guam Police to support continued anti-Japanese activity.” You can find the introduction to the booklet at http://www.scott-duff.com/GuamMono.htm .