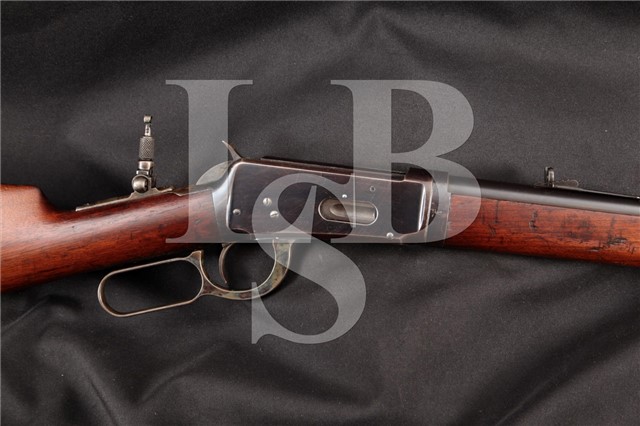 Barrel Length: The round barrel is 26” in length.

Sights / Optics: The front sight is a brass blade that is dovetailed into the barrel and secured with a set screw. There rear sight is a semi-buckhorn “U” notched elevator sight dovetailed into the top of the barrel. There is Lyman No. 1 Combination Tang Sight 2nd Variation mounted on the upper tang. It has a flip down tiny peep sight for target work, and when flipped down reveals a larger aperture in the stem for use on running or close range targets. The sight has a spring loaded detent that locks it into position when raised, but the spring that holds the tiny peep sight in position is broken.

Stock Configuration & Condition: The stocks are 2 piece dark walnut with a lacquered finish, straight grip and flat shotgun style blued steel buttplate. The front of the forend has a steel nosecap with the front of the magazine tube protruding through the nosecap for about two inches. The stocks show oil staining at the butt, in the wrist and in the old bruises and dings scattered over the buttstock and forend. There are numerous light handling marks and drag lines in the left side of the buttstock and forend. There are also several scrape marks through the finish on the left side of the buttstock and several deep dings on the right side of the forend. The wood fits the metal well. There are no cracks or chips noted. The LOP measures 13 1/16” from the front of the trigger to the back of the buttplate. The buttplate shows thinning with light wear at the toe and a strip of light surface frosting down its left side. The buttplate is in about Very Good condition. The stocks are in about Very Good overall condition.

Type of Finish: The rifle is blued, with a case colored lever.

Bore Condition: The bore is bright, tending to gray at the muzzle. The rifling shows light wear. There are a few spots of extremely light erosion in the grooves near the muzzle.

Overall Condition: This rifle retains about 80% of its finish. There is very light surface frosting scattered over the band at the back of the forend, the front of the receiver, and the top rear of the bolt. There are several tiny dings and small scratches through the finish in the front half of the barrel. There is thinning on the edges of the takedown latch and the forend nosecap, and surface loss on the upper tang, loading gate and the edges of the receiver. The remainder of the receiver shows thinning with several light scratches, a few drag lines and several tiny dings, most of which are on the underside of the receiver. There are also a few scratches and tiny dings in the right side of the band at the back of the forend. The ling shows thinning and a few light marks and the bottom of the trigger guard and lever show a few light marks and a muting of the case coloring, which is still brilliant on the top and inside surfaces of the lever. The lower tang shows a mark through the finish from the lever and tiny tool marks around the screw heads. About half of the screw heads are sharp and the remainder are disfigured. The markings are clear. Overall, this rifle rates in about Fine condition.

Mechanics: The action works correctly. This rifle was designed with a half-cock notch in the hammer for a safety and a lever safety. The action locks-up solidly. We did not fire this rifle. As with all used firearms, a thorough cleaning may be necessary to meet your maintenance standards.

Our Assessment: This is a Winchester Model 1894 Takedown Rifle that was made in 1 896, the third year of production. It has a 26” round barrel and a Lyman No. 1 Combination Tang Sight 2nd Variation in addition to its rear elevator sight. The rifle is chambered in .38-55 Win., a cartridge that started out as the .38-55 Ballard. It was designed by Charles Ballard and was first used in 1876 in the Marlin Ballard rifles. The cartridge was renowned for its exceptional accuracy at ranges up to 330 yards, and a Ballard rifle in .38-55 was used to shoot the first perfect score on the American Rest Target at 200 yards. The rifle is in about Fine condition with about 80%+ of its original finish remaining. The bore is bright, turning gray at the muzzle. The rifling shows light wear with a few spots of very light erosion in the grooves near the muzzle.