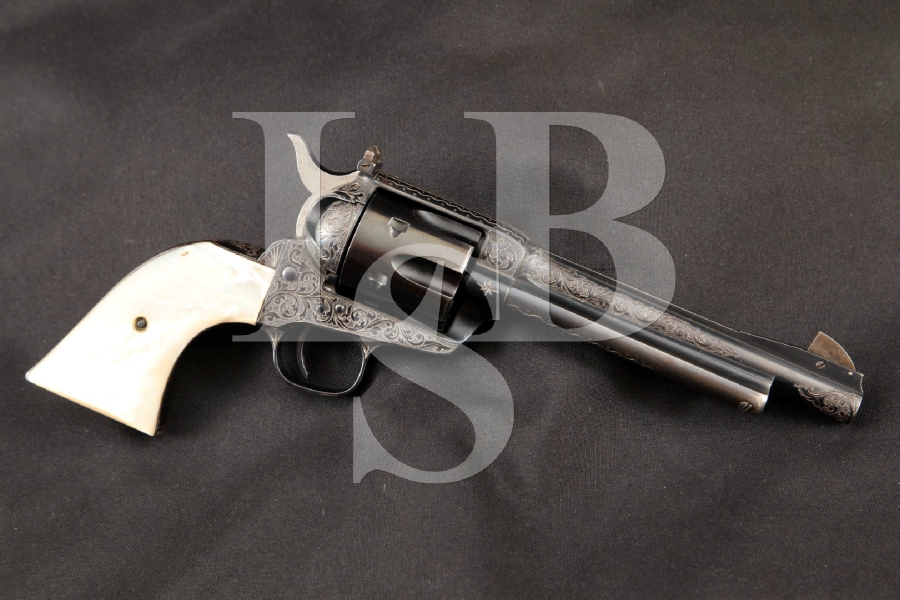 Caliber: There are no caliber markings, the cylinder fits .22 Long Rifle cartridges, the revolver has a Black Powder frame, we recommend a gunsmith’s nod before use. This pistol was modified for rimfire cartridges, Colt’s first .22 RF SAA revolvers were introduced in 1883, with a previous run of .44 RF manufactured in their own serial number range starting in 1875.

Sights / Optics: The front sight is a pinned ‘shark fin’ Patridge blade, slotted fore to aft into a ramp base on the barrel’s added rib; the blade is adjustable for elevation. The rear sight is a square notched base with rounded shoulders, on a base that is adjustable for windage, slotted onto the frame’s top strap; the top of the rib and frame are matted for glare reduction.

Stock Configuration & Condition: The grips are unmarked real mother of pearl. The grips have a slim profile and only small gaps in fit to the grip straps. There are a few dark gouges that look very old. There are a few scuffs and newer small scraps, most are lost in the beauty of the natural swirling. The grips are in about Fine condition as not original to the pistol.

Finish Originality: The pistol was engraved and professionally refinished after modification by Thomas Haas.

Bore Condition: The bore is semi-bright with sharply defined rifling. There is extremely light frosting near the muzzle.

Overall Condition: The revolver retains about 80+% of its current finish. There is a shift to brown patina in the engraved portions, there are some handling marks on the rib and flanks of the cylinder. The leading edges of the barrel, ejector rod, heel and toe of the grip straps and cylinder flutes have holster rubbing and small spots of frosting. The metal under the current finish has a few spots of pitting and fine cleaning marks. The center pin screw slot has mild tooling the rest are highly serviceable. The Thomas Haas markings are clear, most of the original Colt markings are faded or missing. Overall, this revolver rates in about Very Good Plus to Fine condition.

Mechanics: The action functions properly. The cylinder produces tight full lockup and the trigger pull is crisp. We did not fire this handgun. As with all used firearms, a thorough cleaning may be necessary to meet your maintenance standards.

Our Assessment: Thomas Haas was a famous gunsmith from Anderson, Indiana that went out of his way to completely customize high end firearms for his rapidly expanding customer base. He modified this early 1878 made Colt Single Action Army to fire .22 Long Rifle, he honed the action, timed the cylinder to tightly lock up, and he masterfully engraved the gun before applying a new blue finish. Haas served in World War Two and was very good friends with Elvis Presley, who was also a WWII veteran, those who had firearms customized by Haas would never forget his attention to detail and metal mastery. Early Colt SAA revolvers only appreciate down the road, this one should do so exponentially given its link to Mr. Haas, who died in the early 2000’s. This is a rare opportunity to own one of the world’s most famous firearms with a unique chambering and overall build. For a full read on Thomas Haas, visit http://forums.gunboards.com/showthread.php?379082-WHo-was-THOMAS-HAAS-Custom-antique-SAA-gun-builder.