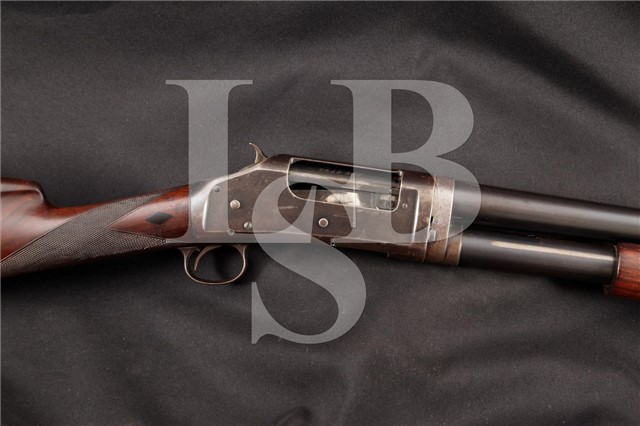 Choke: The barrel is choked FULL. It measures about 0.697” in diameter at the muzzle.

Stock Configuration & Condition: The stock and forend are fancy checkered walnut. There are ebony diamond inlays on the sides of the wrist in front of the checkering. The buttstock has a pistol grip and a curved black checkered hard rubber buttplate with a circled “WINCHESTER / REPEATING / ARMS CO.” logo in the center. The front edges of the forend and buttstock are dark from oil staining and there is light oil staining in the forend and wrist. There is a short hairline crack on the right side of the buttstock near the toe. There are several light handling marks and short drag lines in the right side of the buttstock and several light handling marks in the left side near the buttplate. There are few small dings in the smooth areas of the forend. The checkering shows light to moderate even wear with a tiny mar in the left side of the grip checkering. The left side of the buttstock has a slightly duller finish that the more polished finish on the right side. The LOP measures 13 ¾” in length from the front of the trigger to the back of the buttplate, which fits the stock perfectly. The buttplate tiny handling marks at the heel and toe and its checkering is sharp and without mars. The buttplate is in about Fine condition. The buttstock is in about Good condition and the forend in Fine condition.

Bore Condition: The bore is bright. There are a few tiny spots of extremely light erosion in the area of the choke.

Overall Condition: This shotgun retains about 65% of its metal finish. There are several spots of erosion scattered over the left side of the receiver and barrel extension, deeper erosion along the left upper shoulder and a few light spots on the right side. There are also several spots of pinprick surface erosion scattered over the barrel and magazine tube. The barrel shows thinning with a few tiny dings and several light handling marks in the front half. and there are streaks of surface loss in the magazine tube from rubbing on the slide. The magazine’s barrel band, the lock ring at the front of the forend, the barrel extension and slide all show surface loss with a plum colored patina starting to form. There is surface loss on the edges of the receiver and thinning on the remainder, with a light scratch on the right side of the receiver and a tiny ding on the left side. The screw heads are mostly sharp. The markings are clear and sharp. Overall, this shotgun rates in about Very Good condition.

Our Assessment: The Winchester Black Diamond Trap guns were the grand of dame of trapshooting – a special run of hand-made 97’s that were given special fitting and finishing by the plant’s best craftsman and specially marked with a “black diamond” on either side of the wrist. Per George Madis in “The Winchester Book”, Black Diamond guns were regarded by Winchester as the “top of the line”. Highly prized by trapshooters, they ruled the roost at the turn of the century. These guns were made with checkered fancy walnut pistol gripped stocks. This Black Diamond was made in 1911 and has a full choked 30” barrel. The name “Col. D. B. Dyer” is engraved on the left side of the receiver. Colonel Daniel B. Dyer was a former Indian Agent during the late 19th century who later became partners with William “Buffalo Bill” Cody in a mining partnership, fittingly named the Cody-Dyer Mining and Milling Company, which formed in 1902. With neither man knowing anything about mining, their newly formed company sought the expertise of a man named Lewis W. Getchell, a man notorious for finding worthless commercial property, and who clearly saw the naivety of the two men and convinced Buffalo Bill to invest in what would end up being a worthless claim. The company ended up spending a decade mining a claim with nothing but a few traces of gold to show for it. Col. Dyer died in 1912, just one year after this shotgun was made. The shotgun is in about Very Good condition with 50% of its original finish remaining. The bore is bright with a few spots of extremely light erosion in the area of the choke. The markings are clear and crisp. This shotgun would be a wonderful piece to add to one’s collection of historic Winchester or old west related arms. Please see our pictures, and good luck with your bidding.