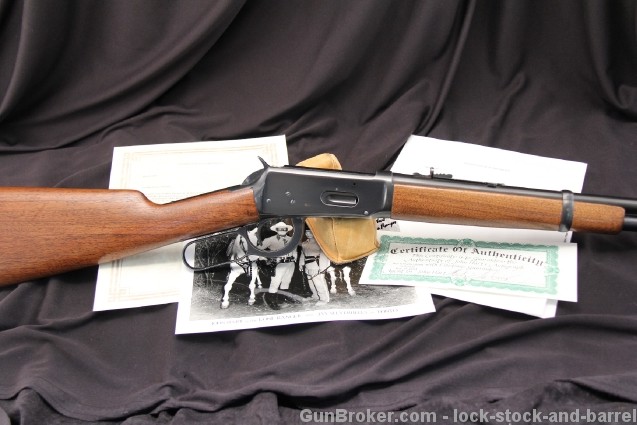 Sights / Optics: This carbine is mounted with a beaded blade front sight, on a ramp and with a hood. The rear sight is a dovetail set semi buckhorn, with elevator present.

Stock Configuration & Condition: The stocks are lightly finished wood. There are few marks, depressions and dings. There are no splits or cracks. The LOP measures about 13″ to the checkered steel buttplate. The stocks rate in about Fine overall condition.

Bore Condition: The bore is bright and the rifling is sharp and deep. There is no pitting or erosion.

Overall Condition: This carbine retains about 90% of its metal finish. The majority of the finish is retained on this rifle. There is one patch of surface frosting on the right side of the frame, behind the loading gate. There is edge wear throughout, and light surface marking on the magazine tube. The frame flats show scattered and light surface scratches. This carbine has a great appearance and is rare being from the early war years when production was severely restricted for the war effort. The Screw heads are sharp, with some wear. The markings are clear. Overall, this carbine rates in about Fine – Excellent condition.

1) An original signed picture of The Lone Ranger and Tonto, reading “Enjoy Our Winchester Serial #1407437, John Hart The Lone Ranger + Tonto”.
2) A letter signed by john Hart, acknowledging this as his rifle purchased from Jay Silverheels and giving a brief history of his relationship with Jay.
3) A Certificate of Authenticity, signed by “Mick Lafever, agent for John Hart”.
Our Assessment: In the early days of television, and the glory days of TV Westerns, there was no comparable program to the Lone Ranger. Ask anyone who grew up in the 50’s and 60’s, The Lone Ranger was huge. The show single handedly with Tonto of course entertained a generation of children, teaching them right and wrong in a way that only a Cowboy could – teaching them the Cowboy Way. The Lone Ranger literally defined a generation, and a rerun of the program today will attract a dozen Silver-Haired men, reminiscing of the simpler days 60 years before, when Americans were proud, the country was unified and a Cowboy (not a Teeny Bopper) dominated the Silver Screen.

Well, this was Tonto’s rifle, owned later by the Lone Ranger himself. True, most remember Clayton Moore as the Lone Ranger, but in 1952, Clayton Moore was replaced as the Lone Ranger on the popular television series – though Jay Silverheels was always The Long Ranger’s trusty sidekick “Tonto”. For 52 episodes, John Hart dashed across the television screen as the man behind the mask, and for 217, Jay played Tonto. John Hart played the part from 1952 to 1954 on 52 episodes when Moore held out in a contract dispute. Jay Silverheels was always Tonto, and apparently was not having the same dispute. (http://www.lonerangerfanclub.com/johnhart.html)

This carbine is as documented as could be hoped for. There is no doubt in our mind that this is Tonto’s rifle. We have an original picture of John Hart and Jay Silverheels, signed in John’s handwriting and listing this carbine by serial number. There is also another letter, in John’s handwriting, discussing this rifle (also by serial number) and his relationship with Jay. Finally, John’s well known agent Mick Lafever supplied a Certificate of Authenticity, further attesting to the rifle and the collection of paperwork, adding to the association of this rifle to our boyhood heroes. https://www.lsbauctions.com/803/the-lone-ranger-and-Tonto-s-winchester-model-1894s-straight-from-john-hart/ . Alright “KIMOSABE” here is your chance bid high.

CA Legal or CA Private Party Transferable: This C&R rifle can be transferred in California.