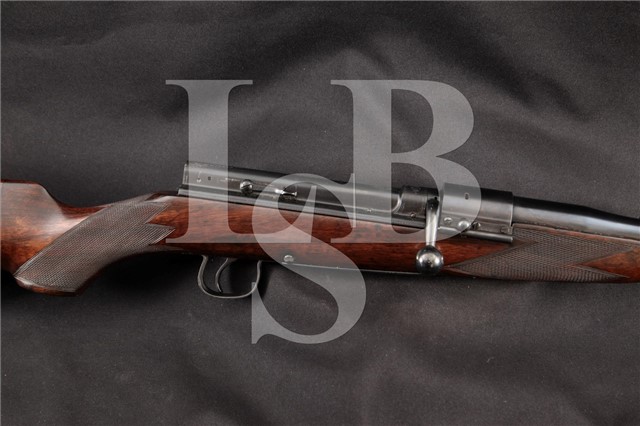 Sights / Optics: The front sight is a fine bead dovetailed into a ramped base fixed to the barrel. The rifle features an island rear sight base with one standing sight regulated at 50 yards and three folding leafs with wide shallow “V” notches marked for 100, 200, and 300 yards.

Stock Configuration & Condition: The stock is a one piece checkered English Walnut with a nice grain and a lacquered finish. The buttstock has a pistol grip and a slightly curved solid red rubber recoil pad with a black spacer. There is a large eyelet for a sling in the belly of the stock and another fixed to the underside of the barrel. The stock has been professionally repaired in what our consignor called the “English Method” in which a large “L” shape piece of wood comprising the butt of the stock and most of the comb was replaced. The wood is well matched, and one must look closely to see the fine seam between the new and old wood. There is also a repair at the front of the magazine where a trapezoidal shaped piece was inlet between the magazine and the stock screw. There is a small chip missing on the left edge of the magazine well and a hairline crack emanating from the left front corner of the well. There are a few light handling marks in the buttstock and forend, with a few drag lines in the left side of the stock above the magazine. The hand cut checkering shows light, even wear without mars. The LOP measures 14 5/16” from the front of the trigger to the back of the recoil pad. The pad shows minimal wear but has become hard with age. The pad is in about Good condition. The stock rates in about Very Good to Fine condition as repaired.

Finish Originality: The finish is not original. Our consignor states that he had the rifle refurbished in England.

Bore Condition: The bore is gray with moderate wear in the rifling. There is light erosion from the muzzle back several inches.

Overall Condition: This rifle retains about 98% of its current metal finish. There are a few light marks in the barrel, magazine floorplate and trigger guard, with a few tiny dings and scrape marks in the bolt knob. There are a few spots of light pitting under the finish to the right of the front sight, with many more sprinkled over the rest of the barrel, with heavier pitting around the rear sight base, the chamber ring and the left side of the bolt. The screw heads are sharp. The markings are very thin, and some of the barrel markings are entirely unreadable. Overall, this rifle rates in about Very Good to Fine condition as refinished.

Mechanics: The action functions correctly. It has a crisp trigger and the bolt slides smoothly. There is a small spring loaded bolt in front of the bolt on the right side of the receiver that automatically locks the bolt so that it cannot inadvertently open if snagged on a bush. We have not fired this rifle. As with all used firearms, a thorough cleaning may be necessary to meet your maintenance standards.

Our Assessment: Cogswell & Harrison was established in May 1770 and is London’s oldest surviving gun maker. The company has manufactured an exceptionally diverse range of sporting shotguns and rifles during its long and colorful history. In 1900, Edward Harrison patented the design for his new Certus big game rifle intended to be an affordable alternative to the Mauser and Mannlicher. An editor of a sporting magazine was quoted as saying “The mechanism is very strong, the parts few in number and simple in construction, as the breech block slides on a pair of flat guides, easiness of loading of the magazine is ensured”, and another as declaring, “The rifle action is not one that can be likened to that of any existing weapon, military or otherwise, upon the market. “. After 1906 no mention of the Certus rifle can be found in the Cogswell and Harrison advertisements, although they used the name Certus on falling block rifle and on several other bolt action rifles, including one currently being manufactured. Please see https://www.countryclubuk.com/ci/ci76_rifles.pdf for more information. This is a very rare Cogswell & Harrison Certus Safari Rifle in .450/400 3 ¼” Nitro Express. This round is capable of propelling a 400 grain bullet to 2150 fps., producing 4000 ft. lbs. of energy: suitable for the largest dangerous game. It was regarded as one of the earliest and greatest, all-around cartridges, used in both double and magazine rifles. This is a Certus rifle chambered in .450/400 3 ¼” Nitro Express with a 26 ½” barrel and safari sights with one fixed and three folding leaf. The metal surfaces and the stock have both been professionally refurbished, with a large piece of wood replaced along the comb and butt of the stock. The rifle retains about 98% of its current finish and is in about Very Good to Fine condition as refinished. The bore is gray with moderate wear in the rifling and light erosion from the muzzle back several inches. In 1900, this was an affordable and reliable dangerous big game rifle and it still is today. Many would be interested in taking this beauty on safari, as it is just feels great when shouldered. However, this model was only made for a few years and there are very few to be had anywhere. We think those who like to collect old and rare firearms are going to price this one far out of range of the shooters.