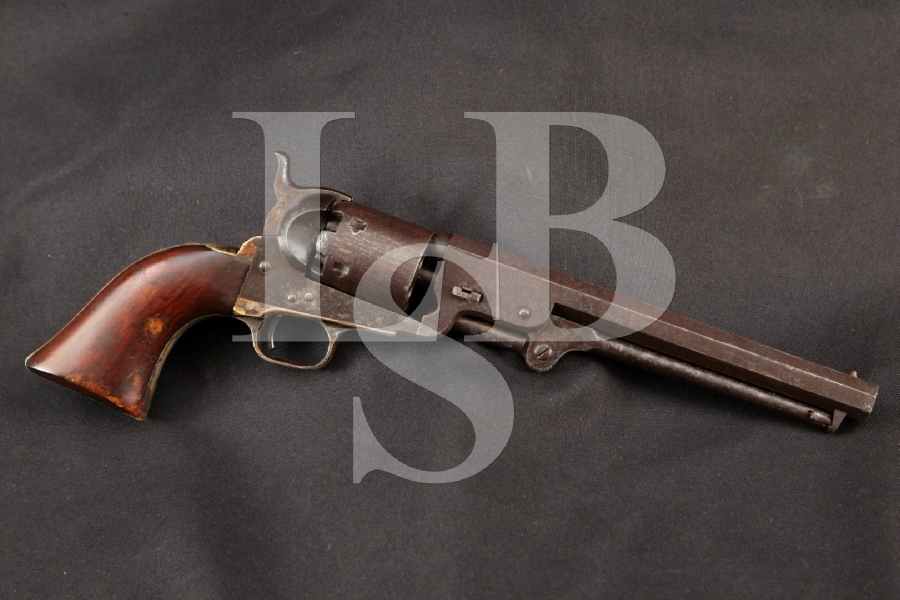 Markings: The top of the barrel is marked “ADDRESS SAML COLT NEW YORK CITY”. The underside of the barrel lug, frame, trigger guard plate and toe of the trigger guard frame’s butt are marked with the serial number. The underside of the barrel wedge, loading lever and cylinder pin are marked with the last four of the serial number. The cylinder has a few sparse areas of the Naval Engagement scene, “COLT’S PATENT N. 32204” is still legible. The left of the frame is marked “COLT’S / PATENT”.

Sights / Optics: The front sight is a conical brass post, screwed into the barrel. The rear sight is a “V” notch on top of the hammer.

Stock Configuration & Condition: The grips are a one piece walnut stock that retains nice fit to the grip straps; there is a small hairline crack at the butt, there are wood filler spots on both flanks of the stock, under the old varnished finish. The wood is very old and dark, there are scrapes and small dings but no major damages. The grips rate in about Good overall condition.

Bore Condition: The bore is dark and the rifling is still defined, but interrupted by light to moderate depth erosion with a few deeper spots of pitting. There is surface erosion throughout the bore.

Overall Condition: The grip straps still have silver plating clinging on, most is dark and chipping away. The blue and case colored finishes are covered with a blanket of heavy patina, there are heavy marks around the wedge area on the barrel. The pistol was hand cleaned over time with semi-abrasive marks found on the cylinder. The exposed brass grip straps have heavy orange patina and several deep bruises, the metal to metal is still very nice at the frame. There is an odd arrow-head shaped mark on the barrel before the address and once on the cylinder, it may have been an inspection mark of some sort. The screw head slots range from light to moderately tooled, the retaining screw is broken in half. The markings are faded. Overall, this handgun rates in about Good Plus to Very Good condition for being 164 years old.

Mechanics: The action functions correctly. There is nominal play in the barrel to frame fit, the cylinder produces light play in full lockup of all 6 chambers. The hammer has a strong mainspring. We did not fire this handgun. As with all used firearms, a thorough cleaning may be necessary to meet your maintenance requirements.

Our Assessment: One of Colt’s most famous line of revolvers was the 1851 Navy, in .36 Caliber, designed from 1847 to 1850 by Samuel Colt himself; despite the designation of “1851”, the first year was actually 18950, with about 2,500 units produced. It’s Dragoon and Walker forefathers had paved the way for repeating percussion military sidearms, eventually spreading to every corner of the earth in popularity. This pistol was made in 1853, some silver plating still remains on the grip straps, all serialized parts match and the action still functions correctly. We would love to hear this pistol’s stories of early American expansion, potentially getting involved in the American Civil War, or heading west to stake a claim, it has two arrow-head marks that add even more intrigue, as they look to be as old as the metal itself. These revolvers have been spotted in thousands of waistbands of soldiers both North and South, they made it all the way to the West Coast during the late years of the Gold Rush and were scattered throughout American boom towns during the railroad years. This should make for a fine addition to your early Colt collection.