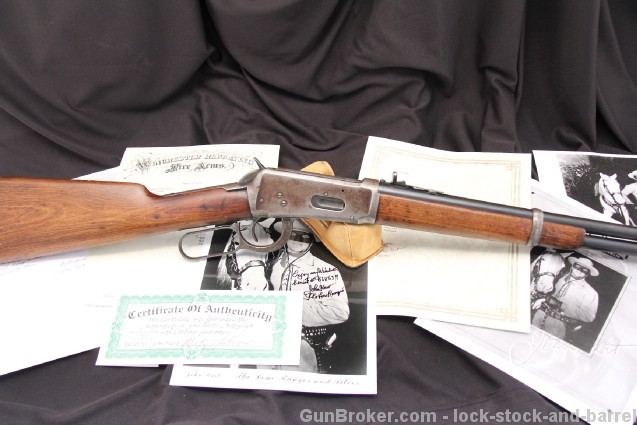 Markings: The left side of the barrel is marked “Manufactured By The Winchester Repeating Arms Co. / New Haven. Conn. U.S.A. Patented August 21. 1894” and “Nickel Steel Barrel / Especially For Smokeless Powder” and “30 W.C.F.”. The Winchester proof is on top of the barrel and the frame. The upper tang is marked “”Model 1894 / Winchester / Trade Mark Reg. In U.S. Pat. Off”. The serial number is on the underside of the frame, with a “93” stamped in front of the trigger.

Sights / Optics: This carbine is mounted with a fixed beaded blade front sight, by “Pacific”. The rear sight is a dovetail set semi buckhorn, from “King”.

Stock Configuration & Condition: The stocks are sanded and lightly refinished wood. There are numerous marks and dings, as well as some light sand lines. There is a hairline crack at the left wrist and another crack at the right of the rear upper tang. The wood remains sound and this age and marking just gives this carbine more character. The LOP measures about 13 1/8″. The stocks rate in about Good overall condition.

Bore Condition: The bore is a bit gray and the rifling is sharp and deep. There is mild erosion and frosting in the bore, though it remains sharp and very shootable.

Overall Condition: This gun retains about 45% of its metal finish. The balance of the finish shows much thinning and discoloration on the frame. This area has turned a mottled patina, with a few nicks and very mild erosion. The barrel shows the majority of its finish, with thinning primarily forward of the forearm. There are tooling marks on the underside of the barrel, ahead of the forearm. This gun has a great “Western” and naturally aged appearance. The Screw heads are serviceable, with some wear. The markings are clear. Overall, this gun rates in about Very Good condition.

1) A Winchester Letter is included, showing a date ca. 1912.
2) An original signed picture of “The Lone Ranger and Silver”, reading “Enjoy My Winchester Serial #568639, John Hart ‘The Lone Ranger'”.
3) A letter signed by John Hart, acknowledging this as his rifle and giving a brief history of his marksmanship.
4) A Certificate of Authenticity, signed by “Mick Lafever, agent for John Hart”. 5) A Xerox copy of correspondence between John Hart and our Consignor. This is in John Hart’s hand.

Our Assessment: In the early days of television, and the glory days of TV Westerns, there was no comparable character to the Lone Ranger. Ask anyone who grew up in the 50’s and 60’s, The Lone Ranger was huge. He single handedly (or at least with Silver and Tonto) entertained a generation of children, teaching them right and wrong in a way that only a Cowboy could – teaching them the Cowboy Way. The Lone Ranger literally defined a generation, and a rerun of the program today will attract a dozen Silver Haired men, reminiscing of the simpler days 60 years before, when Americans were proud, the country was unified and a Cowboy (not a Teeny Bopper) dominated the Silver Screen.

Well, this is his rifle. True, most remember Clayton Moore as the Lone Ranger, but in 1952, Clayton Moore was replaced as the Lone Ranger on the popular television series. For 52 episodes, John Hart dashed across the television screen as the man behind the mask. John Hart played the part from 1952 to 1954 on 52 episodes when Moore held out in a contract dispute. While Hart has done numerous television and film projects, he is often most remembered as the “other” Lone Ranger. (http://www.lonerangerfanclub.com/johnhart.html)

This carbine is as documented as could be hoped for. There is no doubt in our mind that this was his rifle. We have an original picture of him, signed in his handwriting and listing this carbine (by serial number) as belonging to him. There are also two letters, in John’s handwriting, discussing this rifle (also by serial number). Finally, his well known agent Mick Lafever supplied a Certificate of Authenticity, further attesting to the rifle and the collection of paperwork adding to the association of this rifle to our boyhood hero. https://www.lsbauctions.com/803/the-lone-ranger-and-Tonto-s-winchester-model-1894s-straight-from-john-hart/.

So with a hearty “Hi-Yo Silver “ get into the bidding for this special carbine.

CA Legal or CA Private Party Transferable: This C&R rifle can be transferred in California.