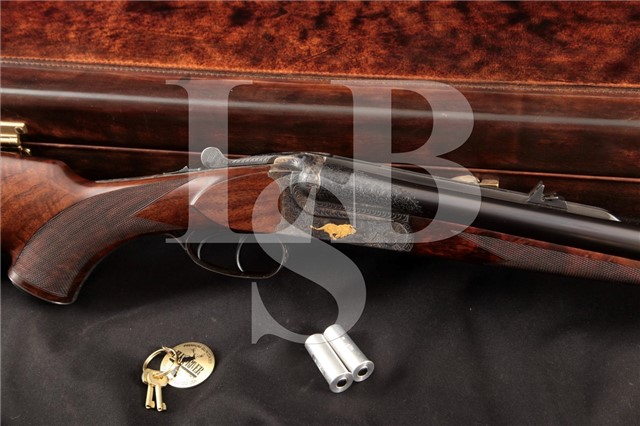 Model: Side by Side Hammerless Cape-Safari Rifle

Action Type: Side by Side, Internal Hammer, Top Break Double Rifle with Ejectors

Markings: The top of the barrel set’s ¼ length rib is marked “470 NITRO” in gold filling. The underside of the right barrel is marked “Rogue River Rifleworks / Paso Robles, CA”, the underside of the barrel set flat is marked with an Ulm eagle proof “10KE” and Suhl smokeless proof, the rear of the flat has “VZ” in oval twice. The left of the barrel lug is marked “JS” in circle and the serial number. The inside of the receiver’s lower plate is marked “0196”, the water table flat is marked with the serial number. The receiver has sculpted gold water buffalo, elephant and a running tiger, all beautifully formed without any blemishes to speak of. The trigger guard has a “JLN” monogram in sculpted gold as well. The receiver, its components, barrel, forend bracket and grip cap have beautiful scroll and floriated engraving, reminiscent of Rigby’s complexity and skill. The flanks of the receiver have scroll engraving and gold bands are surgically placed just before the crown. The recoil pad is marked “DECELERATOR”.

Barrel Length: 24″ long with a smooth fluted bridge between the two barrels.

Sights / Optics: The front sight is a beaded blade, set fore to aft into a pebble finished ramp base, fixed to the barrels. The rear sight is a “U” notched base with a gold sight reference and “50” on the rear face. The base has a second flip-up leaf marked “100”, the base is on a ¼ length matted rib on top of the barrel set.

Stock Configuration & Condition: The stocks are a two piece walnut set with exhibition grade high burl grain. The splinter forend has several small marks, becoming a tad deeper on the belly; the upper right edge has a spot of compression. The butt stock has a sharp fitting engraved grip cap, the checkers were masterfully cut on both stocks. The left of the butt stock has a sharply defined left side cheek piece. There are a few minor marks on the comb and belly, light rubbing is seen on some of the checkers. There are no visible cracks or major damages, both fit at the metal and at the spacer / recoil pad completely flush. Drop at comb is approximately 1 1/2″, drop at heel is approximately 2″, the heel remains about neutral in cast, the toe is cast off to benefit right handed shooters. The LOP measures 13 1/2″ from the front of the rear trigger and 14 1/2″ from the front of the forward trigger to the rear of the Pachmayr Decelerator recoil pad and black spacer. These items appear to have been fit to the stock at the factory; it will help with the shock wave of .470 Nitro Express. The stocks rate in about Excellent overall condition.

Type of Finish: The barrel, top lever, safety and trigger guard are blue, with a sculpted gold monogram on the trigger guard, gold filled lettering on the barrel set and gold bands at the muzzle, the receiver is case colored with sculpted gold animal inserts, the front tang strap and grip cap are silver plated.

Bore Condition: The bores are bright with deep, sharp rifling and no erosion.

Overall Condition: This rifle retains about 95+% of its finish. The upper tang has rubbing from the safety switch, the trigger guard and forend lever have a shift to plum tone. We do not think this rifle saw much use in its life; the metal to metal fit is completely flush without any flaws in the polishing or fit. The sights have faint rubbing, their gold leaf yardage and reference marks are still intact. The silver plating has a dull gray patina. The screw head slots are strait. The markings are clear. Overall, this rifle rates in about Excellent overall condition.

Mechanics: The action functions correctly and is rigid as hell! Everything fits together without any play, the construction is completely solid with incredibly tight tolerances on the Greener Cross bolt. This rifle is based off of the Anson & Deeley action, with Purdey double locking lugs and strong independent ejectors, the rifle weighs in at 11lbs 13oz. We have not fired this rifle. As with all previously owned firearms, a thorough cleaning may be necessary to meet your maintenance standards.

Box, Paperwork & Accessories: Included is the rifle’s original hard case with a brown canvas outer liner. The liner has rubbing wear and a few scrapes, in Fine condition. The case is dark stained leather with fine stitching and sharp lines. The exterior has light scuffs, the interior is green felt lined and holds two included snap caps in the lower tray. Two keys are included for the case. The case, snap caps and keys are in Excellent condition.

Our Assessment: Rogue River Rifleworks produced the .470 Nitro Express Safari rifle from about 1998-2000 in Paso Robles, California. This rifle is built to mirror the famous turn of the century John Rigby line of double guns, with all the bells and whistles Britain’s finest gun makers could conjure. Rogue River was formed in about 1997, having purchased the rights to Rigby’s name for production in the United States. The company became John Rigby & Co. and left Paso Robles, California to be produced by Blaser in Germany soon after this rifle was made, the Blaser line was then discontinued and production moved to England, where John Rigby & Co. still produces masterful firearms. This shotgun is simply beautiful, the fit, finish, engraving and material selection is top notch, its large bore caliber is capable of taking any big game animal with another shot just in case. With the luggage hard case, it will travel well and be the talk of the campfire while on Safari.