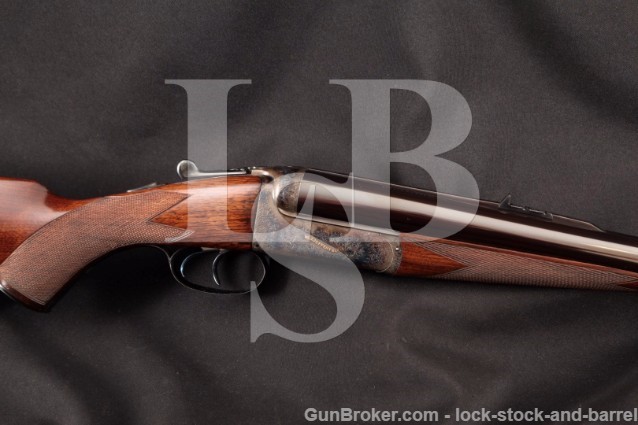 Action Type: Side by Side, Internal Hammer, Top Break Double Rifle with Ejectors

Barrel Length: The barrels are 24″ long with a concave and tapered rib, the top of the rib and sight bases are matted for glare reduction.

Sights / Optics: The front sight is a low profile blade, clipped into a slotted base on a ramp base, fixed to the rib. The rear sight is a standing “V” notched base with “100” and a linear reference on the rear face; the rear sight base has two other sighting leafs for 300 and 200 meters, these also have rear sighting references.

Stock Configuration & Condition: The stocks are a beautiful two piece walnut set with a fine semi-gloss finish, the splinter forend has wrap around checkering and nice fit to the bracket and nose cap. The butt stock has a flank checkered pistol grip, a belly mounted sling stud, with the forward stud on the underside of the barrel set. The belly also has a small metal oval plate that has not been engraved. The forend has a few tiny scuffs and rubbing on some checkers. The butt stock has slight rounding before meeting the receiver and grip cap, there are two small hairline cracks at the upper tang. Drop at comb is approximately 1 3/4″, drop at heel is approximately 2 3/8″, the cast appears neutral. The LOP measures 13 1/2″ from the front of the rear trigger and 14 3/8″ from the front of the forward trigger to the rear of the aftermarket black recoil pad; the stock looks to have been cut at the time of refurbishing. The stocks rate in about Fine overall condition as restored.

Finish Originality: Since the barrel set flat is marked “GRIFFIN & HOWE”, we assume this is who refurbished the gun. (?)

Bore Condition: The bores are mid gray, the rifling is highly defined. There is mild erosion seen in both bores, becoming heavier, developing deeper pits towards the muzzles. We do not recommend firing this rifle until it is deemed capable by a gunsmith.

Overall Condition: The rifle retains nearly all of its current finish, with portions of the barrel shifting to a plum color with age. The metal under the finish on the barrel shows heavy pitting, most is covered with the forend installed, though a few other pits are seen under the finish on top of the set. The flanks of the barrels have scrapes, the rib has mild dings. The case coloring was wonderfully done, the engraving was retained well, the underside receiver plate and trigger guard are finished blue with nice engraving, they are shifting to darker plum with a few tiny spots of frosting. The metal to metal fit is still flush. The screw head slots are strait. The markings are clear. Overall, this rifle rates in about Fine condition as refurbished.

Mechanics: The action functions correctly. The triggers are a little stiff with a crisp break, the ejectors function properly and there is no play in the construction with the action open or closed. The rifle weighs 11lbs. We have not fired this rifle. As with all previously owned firearms, a thorough cleaning may be necessary to meet your maintenance standards.

Our Assessment: W.J. Jeffery & Co. was founded by William Jackman Jeffery, who originally worked with Philip Webley in 1887, later partnering with a Mr. Davies until 1891. After W.J.’s death in 1909; after multiple location and management changes, the company tapered off in the late 1950’s but was still held in high regard for their outstanding attention to detail and attractive ‘big bore’ rifles that were not out of the reach of middle class consumers. The company’s work rivals that of Rigby and other fine British manufacturing firms of the era. The engraving is simply beautiful, the metal to metal fit is flush and the stocks are fine walnut with strict cut checkering. At some point, this rifle was refurbished by Griffin & Howe, they kept the markings and fine metal work well, the case coloring is top notch and the bluing is deep. With its huge .475 Nitro Express chambering, you can take any animal you want while on Safari, be it South America or Africa’s great plains. As a display piece, you could not go wrong at all; once approved by a gunsmith (we suggest this because of the pressures involved), you could impress on the next big game hunt!