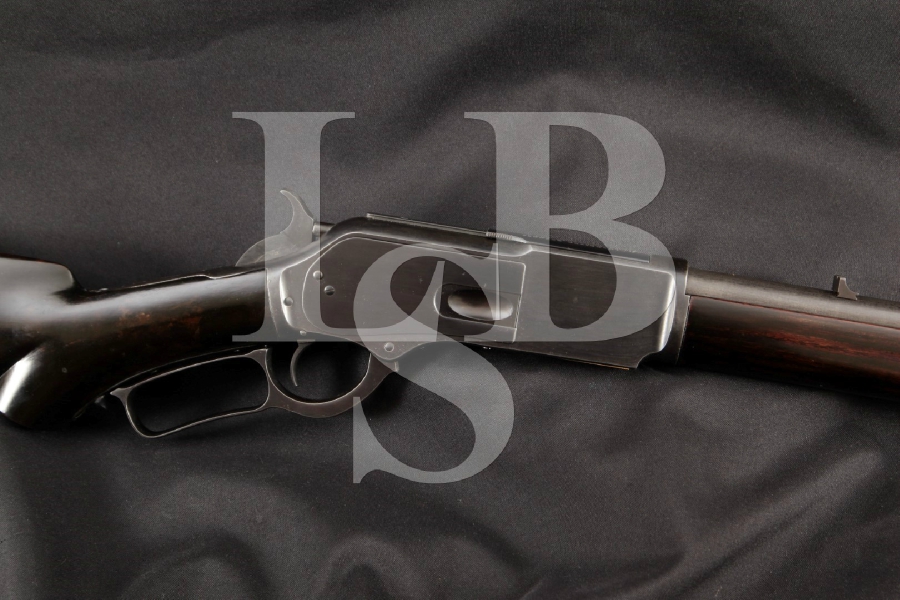 Year of Manufacture: According to the email correspondence provided with the Buffalo Bill Cody Museum, this rifle left the factory on August 26, 1881, finished two days before on the 24th.

Barrel Length: The full round barrel is 22” in length with a 1/2 length magazine, noted in the Cody Firearms Museum Buffalo Bill Historical Center’s ledgers.

Stock Configuration & Condition: The stocks are a two piece lacquered walnut set, which have been sanded and refinished but still retain nice fit to the metal in most areas, though the forend has slight rounding before the metal. Two thin cracks are on the underside of the forend. The butt stock has a pistol grip and fine fitting shotgun style metal butt plate, both noted in the Cody Firearms Museum Buffalo Bill Historical Center’s ledgers. The butt stock has sanding marks under the dark lacquered finish, though you can still make out beautiful deluxe grain below the surfaces. The LOP measures 13” from the front of the trigger to the back of the buttplate. The buttplate shows thinning, minor wear, several tiny scratches and a few dark spots of solid erosion. The buttplate is in about Very Good condition. The stocks are in about Very Good overall condition as refinished.

Bore Condition: The bore is mid gray with highly defined rifling. Light erosion covers most of the bore with a few moderate pits near the muzzle.

Overall Condition: This rifle retains about 80+% of its current metal finish. The barrel’s bluing has thinned to bare metal in some areas, the rear sight has several heavy marks. The metal under the surfaces has consistent horizontal sanding lines and cleaned erosion. The flat sides and rounded corners were retained well. The dust cover was re-stamped; the letters on the top line have a ‘waved’ appearance in their line. The lever and receiver have handling rub wear and light frosting. The brass lifter was polished and retains a high sheen. The metal around the lifter and tangs have gaps in flush fit to the surrounding material; some metal is scooped out of the dust cover by the front screw. A few other dings into the edges are seen, a light dusting of patina is seen on the barrel and receiver assembly. The screw heads are serviceable with mild tooling. The markings are clear. Overall, this rifle rates in about Very Good Plus condition as refinished.

Mechanics: The action functions correctly, though when the hammer is put at half cock, it can still strike the firing pin when the trigger is pulled. We have not fired this rifle. As with all used firearms, a thorough cleaning may be necessary to meet your maintenance standards.

Box, Paperwork & Accessories: This rifle comes with email correspondence with an employee from the Cody Buffalo Bill Museum, stating that the rifle was made August 24th 1881, leaving the factory two days later in a 10 gun order, no destination was noted.

Our Assessment: The 1876 is a beefier 1873, which become one of the most famous firearms in history before the close of the century. This is a special order 1876 in .50-95 Express; most with 22″ round barrels with half magazines in this caliber were sent to the corners of the British Empire, Teddy Roosevelt was famous for hunting big game with a 76 and many trophy kills were had indeed. The large bore cartridge was everything one would want if they were faced with a charging buffalo or mountain lion. This one letters with its current configuration with a pistol grip shotgun style butt stock, half magazine and 2nd model sliding dust cover. Some time ago, it was refurbished and whoever did the job was experienced, keeping the general form and line of the wood and metal. This antique should provoke interest in all Winchester collectors as it is a valid piece of U.S. history.