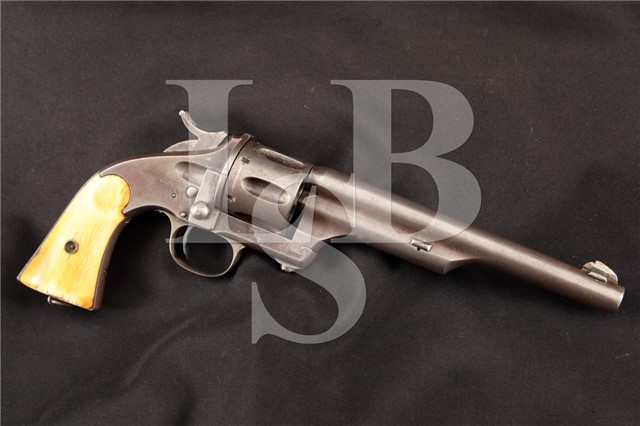 Make: The revolver was made by Hopkins & Allen for Merwin & Hulbert, who distributed the revolvers.

Model: Large Frame 1st Model Single Action Revolver: the features distinguishing the 1st and 2nd models are that the 2nd model had a shorter cylinder bolt and was made without a sideplate. This pistol was also called the “Frontier First Model”.

Barrel Length: The barrel is 7” in length with a 2/3 underlug.

Sights / Optics: The front sight is a rounded blade held in a slotted base which is dovetailed into the barrel. A piece of brass has been inlet and silver soldered into the top of the blade to form a brass bead. The rear sight is a small square notch at the top of the frame behind the cylinder.

Stock Configuration & Condition: The grips are bone on a square butt grip frame. The grips have yellowed with age and show crazing across the bottom surfaces. There are a few small surface cracks emanating from the grip screw escutcheons and a small chip out of the rear edge of the right grip. The grips are slightly shy of the metal along the front strap and backstrap. The grips rate in about Very Good to Fine overall condition.

Bore Condition: The bore is gray with light wear in the rifling. There is very light erosion scattered throughout the bore.

Overall Condition: This revolver retains about 10% of its metal finish. There is bluing left in the protected areas on the sides of the frame below the cylinder window, the left sideplate, at the rear of the recoil shield and in the cylinder grooves. The remainder of the surfaces show surface loss with several light handling marks scattered about. There are small dings in both sides of the barrel near its front wedge, tool marks around the screw heads in the left sideplate and the left side of the frame, and a few small dings in the right side of the frame behind the recoil shield. The bluing that remains is all thinned, and there is light pinprick surface erosion along the lower left edge of the frame above the front of the trigger guard. There are also a few tiny dings in the backstrap and a light drag line in the cylinder. The screw heads are disfigured. The markings on the top of the barrel are clear, but those on the left side are partially worn away at the front. Overall, this revolver rates in about Very Good condition.

Mechanics: The action functions correctly. The cylinder and barrel lockups both show a tiny amount of play. There is ¼ notch in the hammer, which holds the firing pin back just far enough to clear the cartridge heads but doesn’t lockout the trigger if pulled. We did not fire this handgun. As with all used firearms, a thorough cleaning may be necessary to meet your maintenance standards.

Box, Paperwork & Accessories: There is a lanyard ring on the bottom of the grip.

Our Assessment: Merwin, Hulbert & Co. were not manufacturers or makers of guns. There were a group of New York City gun and sporting goods dealers who had a major interest in Hopkins & Allen Firearms of Connecticut and had Hopkins & Allen make guns for them under their own name. Sometimes they sold guns marked with the Hopkins & Allen name, and some guns were marked with both names, but all were made by Hopkins & Allen in Connecticut. This is a Large Frame 1st Model Single Action revolver chambered in .44 Russian. It differs from the 2nd Model in that the 2nd Model has a shorter cylinder bolt and does not have a sideplate. This is a rare early model that was only made for two years, from 1876-1878, with this pistol made in either 1877 or 1878 (due to its 1877 patent markings on the barrel). The revolver is chambered in .44 Russian and has bone grips that have turned yellow with age. The numbers do not all match but were likely period swaps. The revolver is in about Very Good condition, with finish remaining. The bore is gray with light wear in the rifling and spots of very light erosion scattered throughout the bore. Although revolvers made by Hopkins & Allen were not normally considered high quality, the Large Frame Single Action revolvers were considered to be on a par or better than revolvers made by Smith & Wesson at the time. The tolerances held in manufacturing these pistols were so tight that loaded cartridges would stay in the cylinder when the barrel was pulled forwards while only the empty cartridges were ejected. Several infamous gunfighters, outlaws and lawmen used Merwin & Hulbert revolvers, including Jesse James, Pat Garret, Pearl Hart, Bob Dalton and Texas Ranger Frank Hamer, attesting to the reliability of these revolvers. This rare revolver is sure to gather a spot in a collection of early American revolvers.