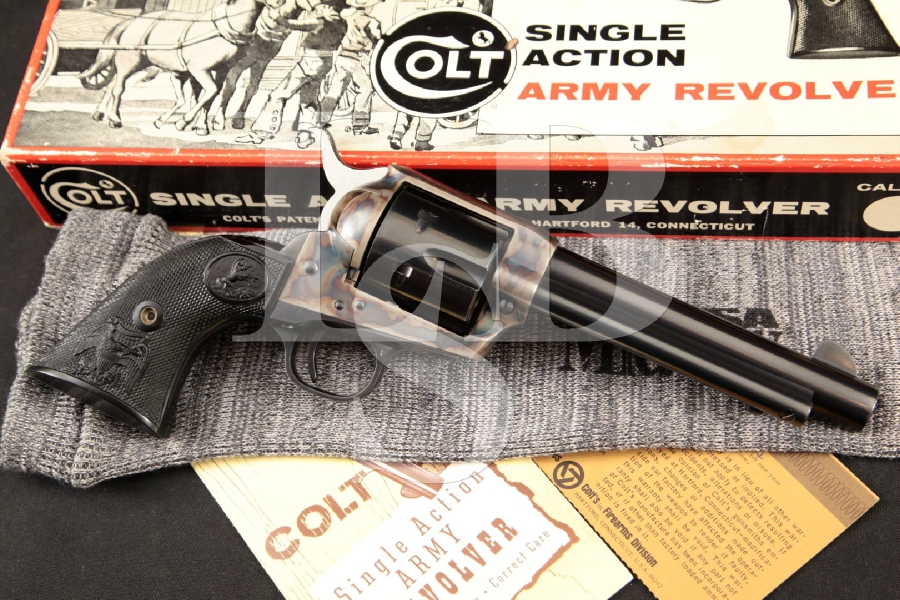 Stock Configuration & Condition: The grips are checkered black plastic with Rampant Colt logos at the tops of the grips and American eagles on the lower flanks, embossed with great detail. The checkers have fine detail, a few extremely light rub marks are seen but do not catch the eye until close examination. There are no cracks or major damages, the panels fit the grip straps flush. The grips rate about in Excellent condition.

Overall Condition: This revolver retains about 97% of its metal finish. The cylinder has several fine scuff marks, all of extremely light depth, resulting in small surface losses. The front sight has thinning on the top edges, the right of the trigger guard has a small scratch, the butt and straps of the grip frame have a few tiny marks. The pistol does not have an established drag line, it is possible this pistol saw only a few rounds go down range in its life. The metal to metal fit is flush, the corners are sharp and the curves are elegantly crafted. The screw heads are sharp and the markings are clear. Overall, this revolver rates in about Excellent condition.

Mechanics: The action functions correctly. The trigger pull is crisp. We did not fire this revolver. As with all used firearms, a thorough cleaning may be necessary to meet your maintenance requirements

Box, Paperwork & Accessories: Included is an original Colt Stagecoach cartoon factory two piece box, depicting the revolver imposed over a western stage scene. The narrow end flats of the lid have small white circled correctly marked “5 1/2 / 45” for this pistol’s configuration (seen also on the tray’s cut inner liner); there would have been an outer slip box with the serial number, this is not included. The interior has a layered cutout insert that shows mild wear and a few small tears. The exterior of the box is roughed at the edges, no major damages are seen. The box is in Fine condition. Also included is a period correct owner’s manual and a warranty card with the revolver’s serial number; the lower area has a date of 10/12/73, which we take to be the original sale date.

Our Assessment: Colt’s 2nd Generation Single Action Army revolver was produced from 1956 to 1974, those issued with Stagecoach scene boxes were made from 1960 to 1973; this is one of those guns, it has survived in Excellent condition, made at the end of 1969. This handsome pistol retains nearly all of its finish and has little evidence of use outside of the factory. Someone had the steadfast will to preserve it this way, its accouterments amplify its collector’s appeal, especially if one of these guns was around when you were growing up in the post-war years. With a 5 1/2″ barrel in .45 Colt, every aspect of ‘fit and finish’ were applied to the creation of this handgun’s manufacture, the metal meets perfectly, the grips mate to the grip straps like they were forged in one. This is a looker for sure!