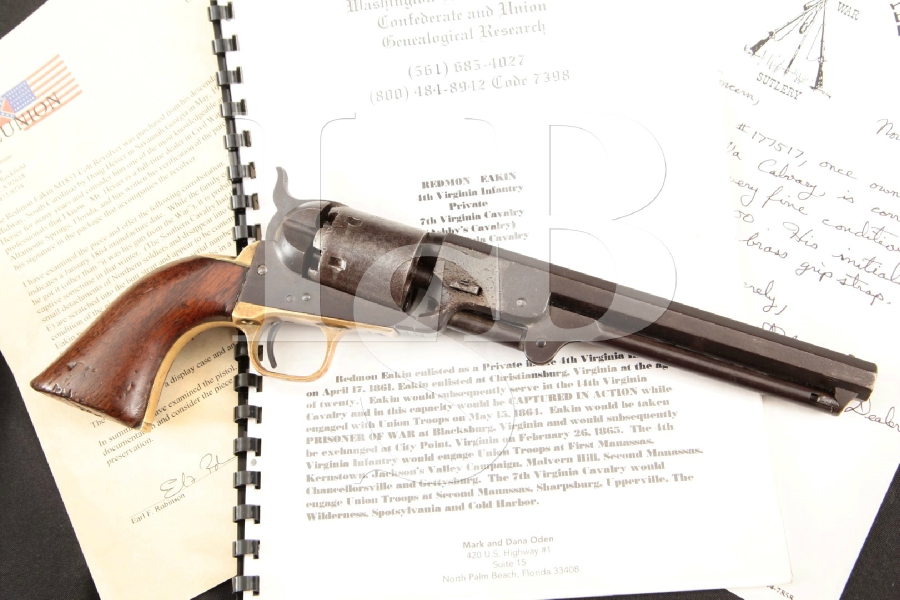 Sights / Optics: The front sight is a brass bead, screwed into the barrel. The rear sight is a “V” notch on top of the hammer.

Stock Configuration & Condition: The grips are a one piece varnished walnut stock, showing a carved “N” on the butt’s right side, the other markings are obscured with multiple nail head holes and abrasive marks. The stock has rounded chip losses at the toe of the grip frame and at the frame itself, with a thin coat of varnish re-applied a very long time ago. The flanks and lower edges have gouges and scrapes. We did not see any cracks. The grips rate in about Good overall condition.

Finish Originality: The surfaces look to have been cleaned over the years; the surfaces have NOT been refinished.

Bore Condition: The bore is dark and the rifling is still defined, but interrupted by light to moderate depth erosion with a few deeper spots of pitting. There is surface erosion throughout the bore.

Overall Condition: The metal has a nice rich patina and strait edges. There are multiple bruises and scratch marks. The cylinder has a heavy drag line and some rounding to its edges at the rear and rubbing through the bolt cuts. The last four digits of the serial number and “COLT’S PATENT NO.” still proudly stamped. The brass grip straps have dark orange patina and a few spots of blackened corrosion. The barrel at the right has multiple deep pits, the area was sanded through the original patina but has since come back with some darkening on the bare metal. The barrel wedge and its surrounding metal have heavy tool marks. The cylinder scene still has a small amount of detail, the other markings are clear. Overall, this handgun rates in about Very Good condition.

Mechanics: The action functions correctly. There is moderate play in the barrel to frame fit, the cylinder produces light play in full lockup of all 6 chambers. The hammer has a strong mainspring. We did not fire this handgun. As with all used firearms, a thorough cleaning may be necessary to meet your maintenance requirements.

Box, Paperwork & Accessories: This revolver comes with a signed D&N Mercantile (David & Nancy Hodge) evaluation of this pistol’s condition and origins linked to Redmon Eakin. Additionally, a signed document by Earl F. Robinson reflects the findings of D&N, also expanding the history of the revolver as having been formally owned by Doug Heiser in Savannah Georgia; this individual bought the revolver from Redmon Eakins’ family in May 1996; according to Robinson’s note, Heiser is a respected Civil War collector. Heiser’s documentation on Eakin’s war records are included, with his signature and certification of the above information. The documentation comes in a nice binder with a clear plastic front to display properly. All items are in Excellent condition.

Our Assessment: This Colt 1851 Navy was made in January of 1864, as the Civil War raged on and Colt’s percussion pistols were depended on for protection in nearly every American city on the East Coast. We are unsure how Redmon Eakin gained this revolver, but what we do know is that he signed up with the 4th Virginia Infantry on the very day the South seceded from the Union on April 17, 1861, his military service extends with ‘Ashby’s Cavalry’, the 7th and also the 14th Cavalry where he became a Corporal. The 7th Cavalry engaged the Union in several battles up until the end of the war, including 2nd Manassas and Cold Harbor. Also known is that Eakin was held as a prisoner of war at Atheneum Prison (http://www.wvencyclopedia.org/articles/305), later transferred to Camp Chase, until February 1865. He was later released from the Richmond hospital near the end of the war. The amount of research and documentation on this pistol is incredible, we see Colt’s Civil War pistols come through often but few have as vivid a history as this one, rarely are the documented owners so fiercely engaged in their war. Everything appears to check out, all of the serialized parts match, its initialed grip frame and condition warrant a nod of approval as a genuine war-era piece that must have had quite a ride. With this grouping, any Civil War collector can agree that its condition is remarkable for its potential role in history.